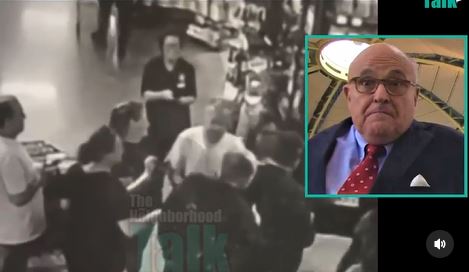 Rudy Giuliani claims that he could have been killed after he was randomly hit by a worker at a ShopRite on Staten Island while out campaigning for his son.

The 78-year-old former New York City mayor said he was suffering from a “very sore back” and “swelling” from the aftermath of the attack inside the store.

“He hit me to knock me down and if that doesn’t merit jail time in New York, we’re in the Wild, Wild, West,” Giuliani said during a virtual press conference.

Chile, Giuliani wants his alleged attacker to be prosecuted, says he could have easily been killed if he’d been knocked to the floor, “It was a very, very heavy shot. He could have easily hit me, knocked me to the ground and killed me,” he said. “He’s lucky he didn’t knock me down. Falling is extremely dangerous for an elderly person.”

The worker, Daniel Gill, 39, was taken into custody inside ShopRite and charged with second-degree assault involving a person over age 65.

Video of the incident has popped up and from all angles, you can feel it was just a gentle tap at the back of Donald Trump‘s former lawyer.