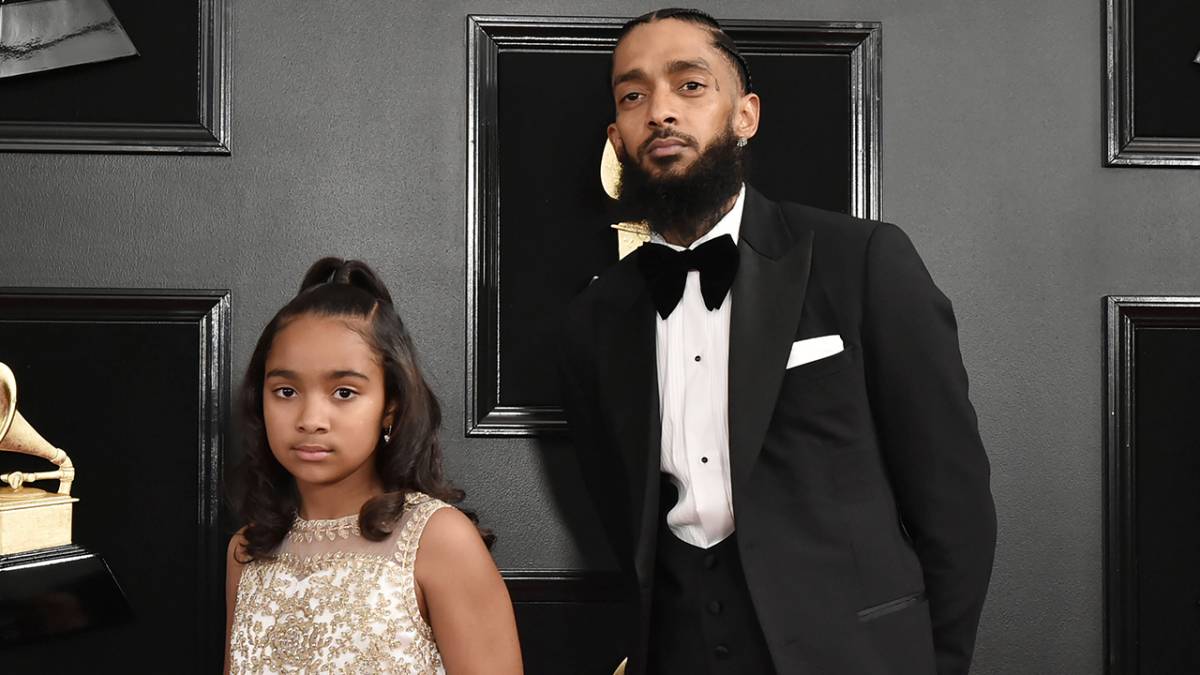 Emani Asghedom, the daughter of late rapper Nipsey Hussle spotted in a new video showing off her dance moves. People are astounded over her growth.

Emani Asghedom is an American-born teenager, famous personality, and celebrity kid from Los Angeles, California. She is best known as the daughter of Tanisha Foster (mother) and Nipsey Hussle (father). Her father was an American professional rapper and songwriter. The star was born on 9th November 2008 in the United States.

In a new TikTok video, Emani was seen displaying her dance moves. It was one of the viral TikTok dances she was seen exhibiting. She wasn’t the little girl we all knew as she has grown up really fast.

Aside from her dancing skills, she went viral with her vocal skills. Many raised concerns that she could be following in her father’s footsteps by pursuing a musical career. She was caught on camera singing the lines to an old song, and many were pleased. The 13-year-old demonstrated her singing abilities while performing the song, I Will Always Love You by Dolly Parton.

The video went viral and caught the eyes of many. Doubts about reaching particular notes were quickly replaced by praises and words of encouragement from her family members as she exercised her lower register tone.

Who is Emani Asghedom?

She is best known as the daughter of Tanisha Foster (mother) and Nipsey Hussle (father). Her father was an American professional rapper and songwriter. The star was born on 9th November 2008 in the United States.

She has one half-brother and the only sibling known as Kross Asghedom. Kross was born on 31st August 2016 in Los Angeles, California. He was born to Nipsey’s new girlfriend, Lauren London, after breaking up with Tanisha.

Nipsey Hussle’s family did stick together as many would have expected. Nipsey and her girlfriend Tanisha publicly broke up in 2013. After the breakup, the two got into a battle fighting over their daughter’s custody. Emani Asghedom’s age is 13 years old as of March 2022.

Like many celebrity kids, she rose to fame by default. Her prominence is a result of being Nipsey Hussle’s daughter. During the 2019 Grammy Awards, she accompanied her father to the awards, thus earning her more fame. She drew the attention of many thanks to her sense of style and innocence.

Before the Grammy Awards, she was still a famous face among many people. She enjoyed the celebrity kid status since her mother regularly shared family photos on social media. In addition, her mother chronicled her daughter’s journey since she was a tiny baby.

A series of incidences and occurrences followed Emani’s father’s death. Initially, her mother had dual custody; it was alleged that she could not offer a safe environment for Emani. This resulted in a heated custody fight between Emani’s mother and her aunt, Samantha.

Samantha accused Tanisha of battling for custody to have unrestricted access to her fortune even though Tanisha came out to deny these allegations vehemently. She had already moved in with her aunt Samantha during the custody battle. Previously, Samantha had been a consistent presence in Emani’s life right from her childhood. From 2008 to 2018, Samantha had been living with Nipsey and Emani. She assisted Nipsey with Emani’s day-to-day care.

Eventually, the court gave Nipsey Hussle’s family custody of Emani and control over her inheritance. The court-appointed Samantha and Hussle’s brother, Sam Asghedom, and mother, Angelique Smith, to be guardians for Emani.

Death of her father

On 31st March 2019 at 3:18 pm, Emani’s father was shot at least ten times while in the parking lot of his store, Marathon Clothing, in South Los Angeles. Three people were wounded in the ordeal and rushed to the hospital. He was pronounced dead at 3:55 pm.

In addition, the perpetrator kicked Hussle in the head severally. Photos taken before her father’s death suggest that she may have witnessed the shooting since she was with him.