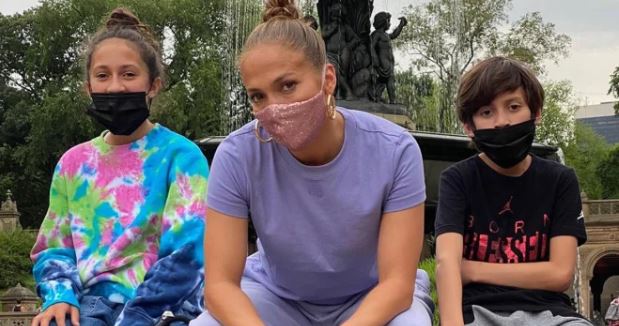 JENNIFER Lopez is best known as a singing sensation and actress from the Bronx.

How many children does Jennifer Lopez have?

Emme is now 14 years old and is following in JLo’s footsteps as a singer.

They surprised Super Bowl audiences by singing alongside their pop star mom at the halftime show in 2020.

Emme sang a rendition of Lopez’s hit Let’s Get Loud, backed by a choir of other young girls.

The two then sang Bruce Springsteen‘s classic Born in the USA.

During JLo’s 2019 It’s My Party Tour, Emme also joined her on stage for a performance of Limitless from the Second Act movie soundtrack.

“(The last time) we performed together was in a big stadium like this, and I ask them to sing with me all the time but they won’t,” JLo said at the time, via TODAY.

“So this is a very special occasion because they’re very, very busy and booked and pricey. They cost me when they come out, but they’re worth every single penny because they’re my favorite duet partner of all time. So if you would indulge me.”

Emme’s twin Maximilian hasn’t taken to the spotlight quite like his sister.

He has, however, also taken a liking to the arts and a video of him singing Riptide by Vance Joy was shared on Lopez’s Instagram.

Max, as Lopez calls him, is also believed to be taking piano and voice lessons.

They were dubbed “Bennifer” and quickly became a prominent super couple.

The pair were due to get married in September 2003 but postponed the wedding indefinitely just a day before the ceremony.

Lopez and Affleck then split in January 2004.

Nearly 20 years after their breakup, the pair sparked dating rumors in May 2021.

They confirmed they rekindled their romance with a loved-up photo shared on Instagram in July 2021.

After months of dating, JLo confirmed the pair got engaged for the second time in her newsletter email shared with fans on Friday, April 8, 2022.

She teased the big announcement with a video shared on Twitter, stating in the clip, “So I have a really exciting and special story to share…”

Not long before Lopez shared her big news, she gushes about her rekindled romance to PEOPLE.

“We’re older now, we’re smarter, we have more experience, we’re at different places in our lives, we have kids now, and we have to be very conscious of those things.”

At this time, it remains unclear when the two will get married.

Who are JLo’s exes?

Since then, Lopez has endured legal challenges regarding her relationship with Noa, including in 2006 when she sued to prevent him from publishing a book about their marriage.

While working on her debut album On The 6, Lopez began dating record producer and rapper Sean Combs.

In December 1999, the pair were arrested along with two others following a shooting outside a club in Times Square.

Lopez was quickly exonerated and had nothing to do with the incident.

Combs was charged with four weapons-related charges but was found not guilty.

But this too was a brief marriage, as they divorced less than a year later in June 2002, citing irreconcilable differences.

She married Anthony in June 2004, and on November 7, 2007, during the final night of their co-headlining tour, the couple announced they were expecting their first child.

Lopez gave birth to twins Emme and Maximilian in February 2008.

But three years later, in July 2011, the couple announced their split and filed for divorce in April 2012.

Their divorce was finalized in 2014, with Lopez retaining primary custody of the twins.

Between October 2011 and August 2016, Lopez had an on-off relationship with her former backup dancer, Casper Smart.

After splitting with the twin’s dad, Lopez got engaged to former MLB star Alex Rodriguez.

However, the couple called off their engagement in April 2021.

“We have realized we are better as friends and look forward to remaining so,” they said in a statement.

Soon after the JLo and A-Rod parted ways, the songstress rekindled her romance with ex-Ben Affleck.