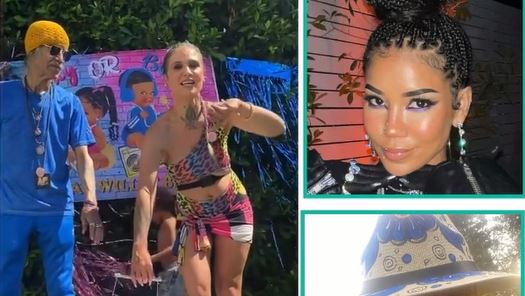 Jhené Aiko will be welcoming a baby brother and her own bundle of joy soon with Big Sean as her father Dr. Karamo Chilombo aka OgDrChil is set to welcome a new baby.

Earlier this month, Jhené Aiko and Big Sean were shocked, and pleased, by the internet when they confirmed that they were having their first child together. After rumors began to swirl that the “Never Call Me” songstress was seen sporting a baby bump, the news of the long-time partners’ secret was delivered via TMZ.

Following the confirmation, Big Sean took to his Instagram story to express his gratitude. “Whole new motivation [for real]. Very grateful God continues to bless us. Thank you,” the 34-year-old wrote to his 15 million followers. As of now, Jhené hasn’t addressed the news directly, but she is talking about other pregnancies.

Yesterday (July 9), Jhene’s father, Dr. Karamo Chilombo, revealed that he was expecting a child as well. The 77-year-old broke the news by sharing a gender reveal video with his 43,000 followers. In the clip, he is seen standing next to his future baby’s mother as she explained the rules of how they would determine if they were having a boy or girl.

“It has blue, pink, blue, pink… at the end, it’s going to be three rows. It’s either going to be pink or blue,” she stated as she stood over a box labeled ‘Boy or Girl?’ After giving out details, the two parents started pulling paper from the gadget, finally exposing a row of blue pieces. “It’s a boy,” everyone in the background yelled.

Filled with joy, Jhené hopped into the comments and wrote, “Congratulations [blue heart],” this prompted her father to reply, “Thank you my wonderful, beautiful daughter.”

Check out the clip below.