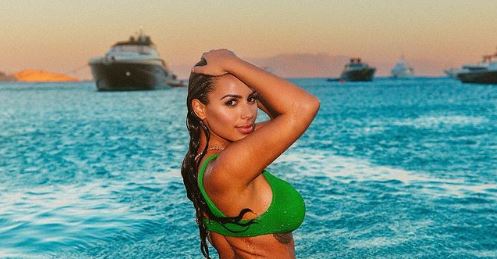 The two were at the same spot at the same time, and this isn’t the first we’ve heard of them hanging out.

Last month, rumors sparked that IG influencer, Chaney Jones, and rap icon, Kanye West had called it quits. The couple started dating earlier this year, and social media users were sure that this was one of Ye’s multiple attempts to get over Kim Kardashian. However, the two called everyone’s bluff by lasting longer than expected, taking exotic trips, and buying each other expensive gifts.

It wasn’t until the father of four was spotted out with a mystery woman at a movie premiere that social media got worried. Unbothered by the internet’s opinion, Chaney posted a comedic snippet of her boo on Instagram– seemingly telling everyone to mind their business.

Since then, no one has heard much about the two’s relationship until now. Yesterday (July 16), Chaney posted some scenery that greatly resembled what someone else uploaded– Justin Combs. While enjoying her vacation in Greece, the 24-year-old shared views from the beach which was filled with blue and white umbrellas.

Around the same time, Justin Combs, Diddy’s son, had uploaded the exact view from the exact spot. This could all be a coincidence, however, this wouldn’t be the first time that they’ve been around each other. So, are Justin Combs ad Chaney Jones in a relationship?

Chaney Jones reacts to rumors of her dating Justin Combs

Chaney Jones has responded to the rumor that she and Justin Combs have taken off together on a trip to Greece. The 24-year-old model says that she’s with a large group and they’ve been family friends for years.

After sharing photos on the beach from the trip, fans noticed that both Jones and Combs were in the same location. Jones clarified the situation in the comments section of a photo of her in the water.

“No there was a group of us there & I’ve been friends with that family for years,” she wrote in response to one user. “Please stop believing everything you see on the internet lol.”

Jones was previously in a relationship with Kanye West, but Page Six reported back in June that the two had broken up. Jones tried to quell the reports by posting “Happy birthday baby I love youuuuu,” to West on social media.

Later that month, Jones posted a TikTok video of her playing football with Combs.

Jones and Combs aren’t the only two celebs who were spotted vacationing in Greece. NBA star Tristan Thompson was seen holding hands with a mystery woman in Mykonos.

Check out Jones and Combs’ similar vacation posts below, as well as Jones’ response to the rumors.