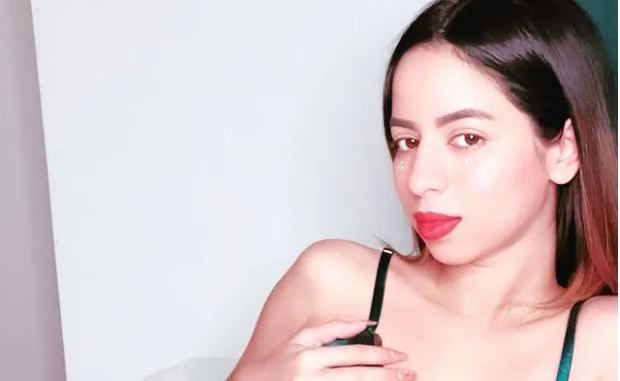 We have 10 images of Kimmikka the lady who has been banned on Twitch after her leaked video went viral on Twitter and Reddit.

A Twitch streamer has been given a seven-day ban from the platform after she was caught having s*x while streaming live online.

Kimmikka, 21, who has built a sizeable online following, went viral on Twitter as the offending clip was shared repeatedly.

The footage showed a portion of her live stream which seemed completely innocent.

However, fans watching the stream noticed a change in her facial expressions and grew suspicious.

Taking a closer look, some noticed a reflection in the window that showed the streamer’s partner behind her and seemingly performing a s*x act.

The internet celeb – who was clothed -tried to cover it up by responding to fan questions as normal.

The shamed streamer responded to the mishap by saying it was a “drunken accident” and confirming that she had received a week-long ban.

Her channel now greets users with the notice: “This channel is currently unavailable due to a violation of Twitch’s Community Guidelines or Terms of Service.”

TheVibely has chanced on her IG account with over 16K followers and has collected 10 pictures of Kimmikka.

#2. She has a spider tattoo in-between her boobs and a couple of tattoos on her body

#3. She first went viral on Reddit on a thread called LiveStreamFails

#5. She was a Twitch streamer but desperately got the fame she was looking over her leaked video

#6. She reacted to her viral video by saying it was “a drunken accident”

“Nudity and sexually explicit content or activities, such as pornography, sexual acts or intercourse, and sexual services, are prohibited,” according to their community guidelines.

#9. She hasn’t officially responded to her viral video after numerous news outlets called for an interview.

#10. Kimmikka looks unperturbed over her going viral. She often updates her Instagram stories