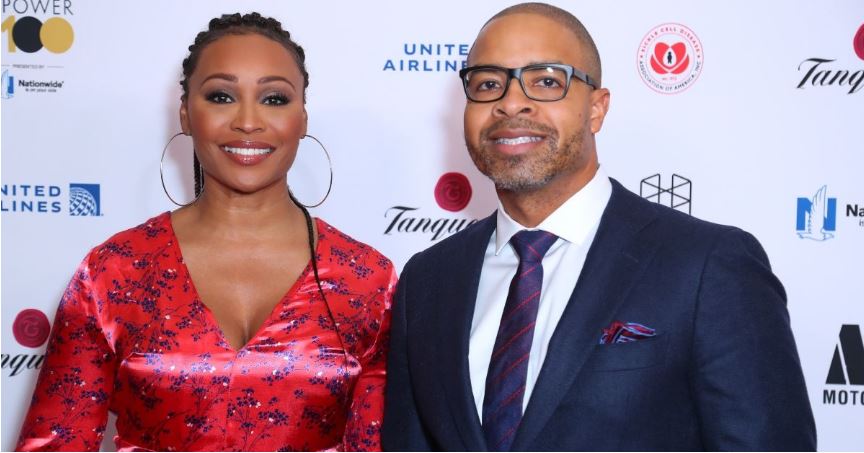 How did Mike Hill and Cynthia Bailey meet? Who else has Mike Hill dated, and does he have children?

When we first met Cynthia Bailey in Season 3 of The Real Housewives of Atlanta she was dating restaurateur Peter Thomas, who she went on to marry and divorce. Viewers saw the ups and downs in their relationship, like when her sister, Malorie, tried to stop their wedding, and the moment when they swapped vows.

Since their 2017 divorce, fans have wanted to see Cynthia find everlasting love. She introduced her beau, sportscaster Mike Hill, in Season 11, and the two were soon exclusively dating and moving in together.

Cynthia finally got her dream proposal during the opening of her latest business venture, The Bailey Wine Cellar, and she and Mike wedded in October of 2020.

Who are Mike Hill’s ex-wives? Read on for all that we know about his past romantic history, and kids.

Who are Mike Hill’s ex-wives?

Before Mike and Cynthia began their relationship in 2018, the Fox Sports 1 announcer was married two times. He’s the father of two adult daughters, Ashlee, who is 22, and Kayla, who studied at UCLA. He has one daughter with each of his ex-wives, and both of his kids were present during his engagement to the RHOA star.

It’s unclear who Mike’s first ex/Ashlee’s mother is or when their marriage broke up, but his second ex-wife is Camille Hill.

While promoting his upcoming memoir Open Mike to Madame Noire, the sports expert elaborated on his marriages.

“The first time I was married, it was officially 10 years. The second time was 11 years. I was married a long time, and it cost me in those alimony payments,” he joked.

He also opened up about what went wrong in his marriages, and he admitted to being unfaithful to his ex-wives. Mike also said that, after his second divorce, he was insistent on never getting married again.

“Getting married to Cynthia is absolutely everything I’ve wanted to do. I never thought I would do it again. If you would have asked me three years ago, I would have been like ‘Hell no I’m not getting married again! First of all I can’t afford it! Secondly I don’t want to do it no more because marriage doesn’t work for me’ But I wasn’t ready,” he explained.

“I learned from my two previous marriages that I wasn’t whole,” he later continued. “I wasn’t a good person in my previous two marriages… Infidelity was rampant in my first and second marriage. It cost me my second one but there were a bunch of other details involved in that. … I got married for whatever reason I got married, but now I am marrying Cynthia Bailey because I’m whole, she’s whole, and it’s something I want to do.”

Mike said that therapy was helpful to him growing, and ending his cheating ways.

“There was a lot of counseling that I needed. It’s a lot of therapy that I needed that I didn’t know that I needed because there was a stigma in the community about seeking help,” he said. “You can have something inside of you that’s eating you alive and not know it.”

On the teaser trailer for the Feb. 7 episode, Cynthia confronts her concerns about Mike’s past head on.

“He has cheated on his wives before me. What makes me so different?” she wondered during her interview confessional.

If Mike’s words about becoming a better man are true, then Cynthia has nothing to worry about.

How did Mike Hill and Cynthia Bailey meet?

Mike Hill and Cynthia got married in 2020, the couple has none other than Steve Harvey to thank for setting them up. In a 2018 appearance on Steve, Cynthia went on the show to find her dream guy, and she had a selection of three eligible bachelors.

One of these bachelors was Mike, of course, and she chose him for the date at the end of the segment. While Mike assumed that nothing would come of this, he said that producers backstage played both sides.

The producers’ insistence led the two to go out, and the rest is history.

“It’s almost like they set us up on a blind date even though we saw each other,” he continued. “We started talking and initially it was a slow burn, but that slow burn became a blaze and now it’s an inferno. I’m thankful for that.”

Mike Hill has been the target of cheating rumors on social media.

Even though things have been smooth sailing in Mike’s life since jumping the broom with former RHOA star Cynthia Bailey, it appears that cheating rumors are persisting online.

During the week of Nov. 1, 2021, the Twitter account @Alist_xo took to the app to call out Mike for allegedly cheating on Cynthia via inappropriate conversations and nude photos, per Bossip. The outlet shares that the account posted a slew of messages and pictures while accusing the sports commentator of being “easily swayed.”

However, Mike has called foul on the entire situation. Per TheNeighborhoodTalk, Mike denied the allegations to a fan via DM exchange captured by the blog.

“They are exposing you on Twitter bruh,” the fan wrote to Mike.

“Please don’t believe the BS,” Mike allegedly wrote back. “They’re not exposing me because THAT’S not ME. Don’t know this person or why they’re doing this but my lawyer has been contacted.”

Mike also allegedly went on to thank the fan for their concern and share that he “wouldn’t do [Cynthia] like that.”

Not to mention, TMZ caught up with the couple on Nov. 2, 2021, at LAX where they also asked them about the rumors. As the couple headed into the airport, Mike shared that the rumors “ are not true.”

Cynthia also said that they’re in a great place and “rumors are rumors.” Mike also said that if the rumors continue to persist, they plan on taking legal action.

There’s no denying that some celebs have been caught red-handed cheating on their spouse. But when it comes to Mike and Cynthia, the rumors are a bit far-fetched to believe since they appear to be smitten with one another.

There’s no telling when the rumors will die down, but it’s great that the couple is not allowing fiction to take a toll on their marriage.