Are Talulah Riley And Thomas Brodie-Sangster dating? Here are some moments in pictures that confirm that Elon Musk‘s ex-wife is in a relationship with the Love Actually star.

Thomas Brodie-Sangster and Talulah Riley make Red Carpet debut as they seemingly confirm romance amid a few times they’ve been spotted together.

The British actors stayed close to each other as they posed for photos at the 2022 British Academy Film Awards Gala Dinner on Friday.

TheVibely has gathered the moments three moments with pictures where Love Actually star, Thomas Brodie-Sangster and Talulah Riley made headlines with their romance.

Talulah and Thomas began dating during the filming of the forthcoming drama about the Sex Pistols and their relationship remained undetected. 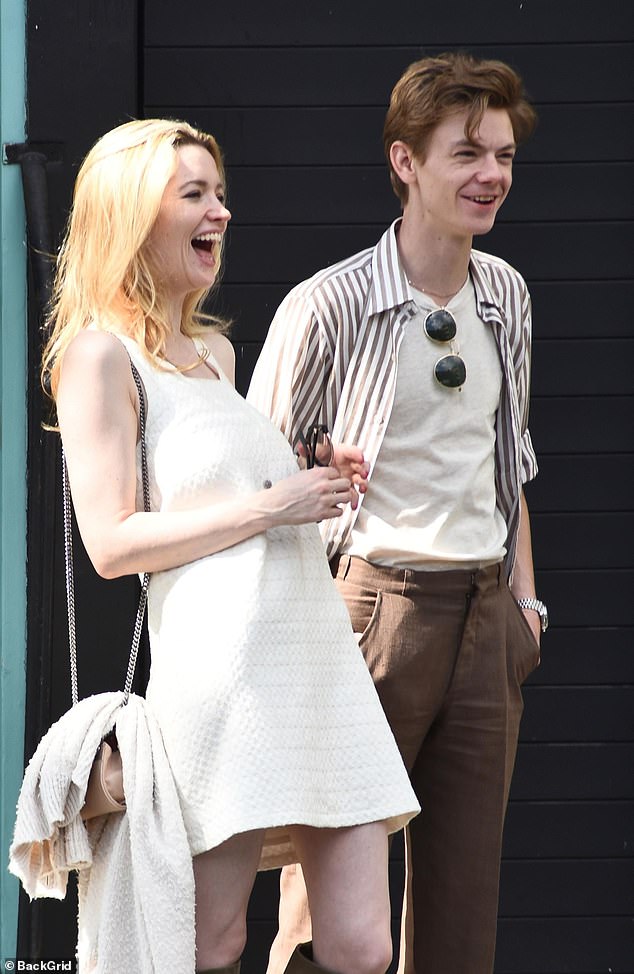 The Danny Boyle-directed limited series will tell the backstory of the English rock band, Sex Pistols, and is set to premiere in May.

Though Thomas and Riley first met on the set of the forthcoming drama about the Sex Pistols – there was nothing very punk about the dance moves Talulah Riley and her boyfriend Thomas Brodie-Sangster tried out at a pre-Bafta party on Friday, March 11, 2022.

Their relationship became serious in the public’s eye when The Mail on Sunday learned that Talulah’s previous romance with Matthew Rice had come to an abrupt end. 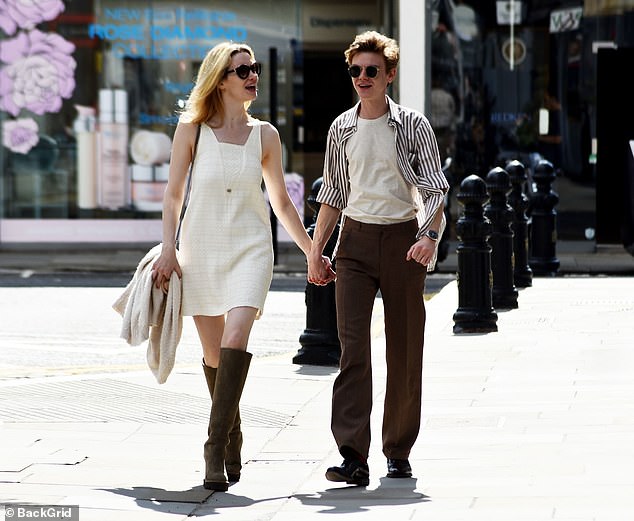 ‘Talulah and Matthew were on-off for a long time, but it seems that romance fell by the wayside to make room for Thomas,’ said a source. ‘Talulah was dating Matthew right up until the spring, and he’s still a little shocked and saddened it has all ended between them.’

Matthew confirmed the split when approached by this newspaper, saying: ‘She’s a wonderful and amazing girl, she’s utterly gorgeous. Whoever gets to be with her, whether famous or not, is a lucky man.

‘It’s such a pity it ended. I was so lucky to be in her attendance for a bit. It was on and off for a long time and it eventually ended without any arguments. We are still friends but we aren’t in regular touch anymore.’ 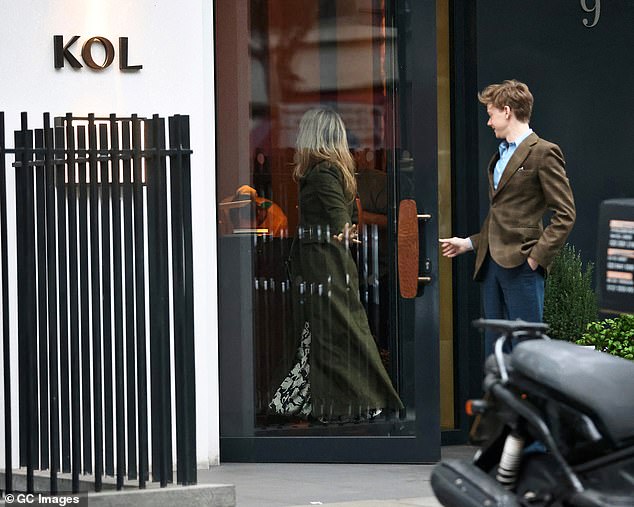 Having had their fix of traditional fare, the couple went all swanky in January with a Mexican meal at KOL, a Marylebone restaurant with a £110 set menu

Thomas Brodie-Sangster, on the same day, whisked Talulah off to a chippie on Cleethorpes Pier. 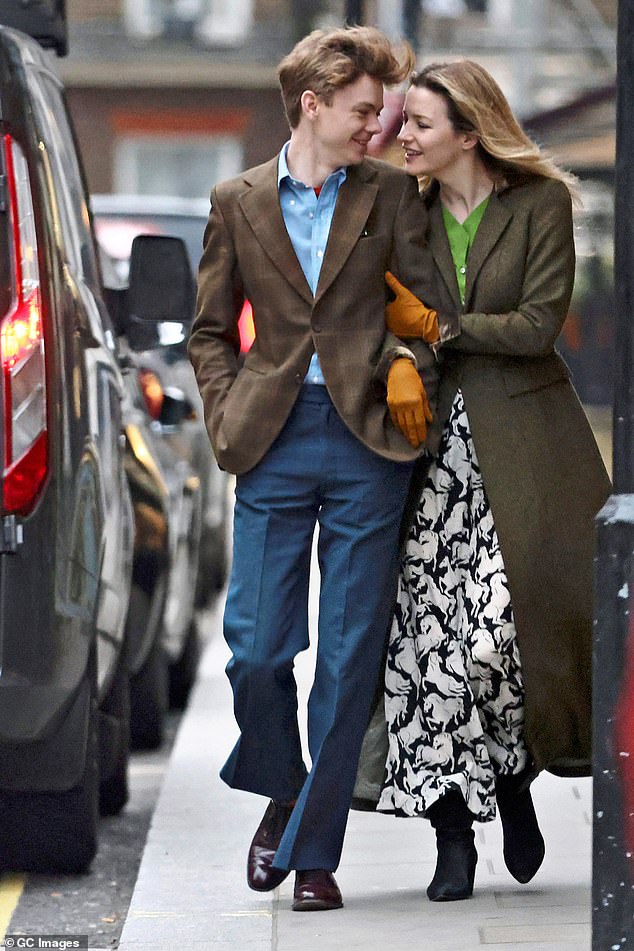 When you’re dating the ex-wife of the world’s richest man, you probably ought to pull out all the stops at the poshest London restaurants.

But Queen’s Gambit star Thomas Brodie-Sangster, 31, likes to mix things up a bit, treating Talulah Riley to lunch at the celebrity London haunt KOL soon after having whisked her off – to a chippie on Cleethorpes Pier.

Last month, Brodie-Sangster and his 36-year-old girlfriend, who has been married to Tesla billionaire Elon Musk, 50, twice, splashed out on fish and chips at Papas, where a sit-down meal costs just £8.99.

Talulah’s ex, Mattew Rice tagged Thomas Brodie-Sangster as a lucky man for dating her when talking with The Mail.

He is much younger than Talulah’s recent companions: ex-husband Elon is 50 and Matthew is 59. In February, the MoS revealed that she and Matthew had been quietly seeing each other in the wake of his 2018 divorce from ceramics designer Emma Bridgewater, to whom he was married for 30 years.

Emma and Matthew have four grown-up children together and started their pottery empire 36 years ago before Talulah was born. Last night, Matthew laughed off any suggestion that his split from Talulah could make way for a rekindled romance with Emma, 61. He added: ‘I think the idea of me returning to Emma is very unlikely. That would be a terrific waste of everyone’s time.’

When asked about Talulah moving on to Mr. Brodie-Sangster, Matthew said: ‘He’s a very lucky man. I haven’t got anyone at all on the scene now, but please do ask around for me. I am on the lookout.’

Thomas Brodie-Sangster and Talulah Riley hit the red carpet together! Confirming thier romance at the pre-Bafta party.

After months of speculation, the pair seemingly made their relationship official on Friday, March 11, at the 2022 British Academy Film Awards Gala Dinner.

Brodie-Sangster, 31, who is best known for his roles in Queen’s Gambit, Love Actually, Maze Runner, and Game of Thrones, looked dapper at the event, wearing a patterned suit and a black velvet bowtie.

Riley, 36, a fellow British actress whose credits include Pride & Prejudice, Inception, and Westworld, wore a green sequined gown with a thigh-high slit. She completed the sparkly look with a diamond necklace and gold heels.

The duo stayed close to each other inside the event, with Riley even resting her head on the actor’s shoulder in one photo snapped near the bar.

It is the first time they have been seen together at a public event since they began dating while filming Pistol, in which they play svengali Malcolm McLaren and designer Vivienne Westwood.

The pair cut a rug at a gala dinner at the West End’s swanky Londoner hotel, and it may have been the free-flowing champagne that gave Queen’s Gambit actor Brodie-Sangster enough Dutch courage to show his footwork.

They are yet to comment on their romance but were seen at a fish and chip shop on Cleethorpes Pier earlier this year.

They were joined by a host of stars, including Call The Midwife actress Helen George, wearing a baby blue frock with feathered sleeves, and Victoria star Jenna Coleman, 35, who chose a demure orange satin creation.

Former Radio 1 DJ Edith Bowman was also there and even managed to do a turn on the drums.

Prior to Brodie-Sangster, Riley was previously linked to Tesla and SpaceX founder, Elon Musk.

Talulah married PayPal and Tesla tycoon Musk in 2010, but they split two years later, before remarrying in 2013. The billionaire filed for divorce in 2014, then withdrew it. Two years later, Riley filed for a divorce which was finalised later that year.

At the time, Elon said: ‘We took some time apart for several months to see if absence makes the heart grow fonder, and unfortunately it did not.’

In an interview with the Daily Mail that year, Riley opened up about her on-again-off-again relationship with Musk, explaining that while they were still on good terms, she had no regrets about choosing to get a divorce.

“I think it’s the right decision. Presumably, with all divorces, there is [sadness]. But on balance we’re both really happy,” she said, later adding, “Marriage is a social construct, but I still believe in it. Elon and I are best friends. We still see each other all the time and take care of each other. If this could continue indefinitely it would be lovely.”

As for Brodie-Sangster, the actor was previously linked to model and photographer, Gzi Wisdom.

Diminutive Thomas’s star is in the ascendant since his acclaimed role in Netflix chess drama The Queen’s Gambit last year.