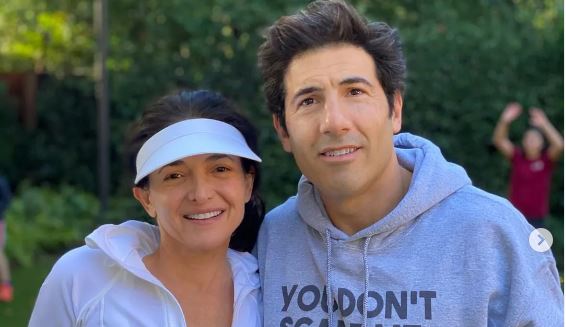 Facebook’s Sheryl Sandberg has tied the knot with American businessman Tom Bernthal – Inside their relationship timeline.

Sheryl Sandberg, who will be stepping down as the COO of Meta (formerly Facebook) in the fall, tied the knot with Tom Bernthal on Aug. 20 in Wyoming.

On February 3, 2020, she announced her engagement on Facebook to Kelton Global CEO Tom Bernthal. They were married in August 2022.

In an Instagram post, Sheryl, 52,  shared a snap of herself and her new husband in a woodsy setting with the caption, “MARRIED” with several red heart emojis.”

Tom and Sheryl together make a family of seven as each has kids from their previous relationships. So, how did Sheryl Sandberg and Tom Bernthal meet and how many kids do they have?

Who is Tom Bernthal?

Bernthal was born in Washington, D.C., to Joan Lurie (née Marx) and Eric Lawrence “Rick” Bernthal, a former lawyer with Latham & Watkins LLP and currently chair of the board of directors for the US Humane Society.

His paternal grandfather was musician and producer Murray Bernthal.

He has two brothers, Jon Bernthal, an actor, and Nicholas Bernthal, an orthopedic surgeon, and professor at UCLA. Bernthal and his family are Jewish.

Bernthal grew up in Cabin John, Maryland. He attended the Sidwell Friends School.

Bernthal began his career working at the White House’s Communication Office during the Bill Clinton administration. Following this stint, he worked as a news producer and journalist for NBC News. During his six years with NBC, Bernthal produced segments for the Today Show, Nightly News, Dateline, MSNBC, and CNBC and won three Emmy Awards for his work.

In 2000, Bernthal moved to Los Angeles, where he continued to work for NBC before founding his own marketing and consulting agency in 2002, Kelton Global. He presently is the CEO and Co-President of the organization.

Who is Sheryl Sandberg?

Sheryl Kara Sandberg is an American business executive, billionaire, and philanthropist who was born on August 28, 1969 (age 52) in Washington, D.C., U.S.

She was born to a Jewish family, the daughter of Adele and Joel Sandberg, and the oldest of three children. Her father is an ophthalmologist, and her mother was a college teacher of the French language.

She attended North Miami Beach High School and graduated in 1987.

Sandberg served as a chief operating officer (COO) of Meta Platforms, a position from which she stepped down in August 2022. She is also the founder of LeanIn.Org. In 2008, she was made COO at Facebook, becoming the company’s second-highest ranking official.

In June 2012, she was elected to Facebook’s board of directors, becoming the first woman to serve on its board. As head of the company’s advertising business, Sandberg was credited with making the company profitable.

Prior to joining Facebook as its COO, Sandberg was vice president of global online sales and operations at Google and was involved in its philanthropic arm Google.org.

Before that, Sandberg served as chief of staff for United States Secretary of the Treasury Lawrence Summers.

In 2012, she was named in the Time 100, an annual list of the most influential people in the world. On Forbes Magazine‘s 2021 billionaires list, Sandberg is reported to have a net worth of US$1.7 billion, due to her stock holdings in Facebook and in other companies. In 2022, she announced she would be stepping down as Meta COO in the fall but that she would remain on its board.

Who has Sheryl Sandberg been in a relationship with over the years before meeting Tom Bernthal?

Sandberg married Brian Kraff in 1993 and divorced a year later.

In 2004, she married Dave Goldberg, then an executive with Yahoo! and later CEO of SurveyMonkey. They have two children together. The couple has a son and a daughter. Sandberg and Goldberg frequently discussed being in a shared earning/shared parenting marriage. Sandberg also raised the issue of single parenting conflicting strongly with professional and economic development in America.

In May 2019, it was reported that Sandberg and Activision Blizzard CEO Bobby Kotick had split after three years of dating.

As for Tom Bernthal, the name of his former wife is not known but he has been married and divorced. Also, the reason for his separation from his ex-wife is not known yet. Tom recently disclosed the loss of his lover signaling that he also lost his wife to death.

How did Sheryl Sandberg and Tom Bernthal meet?

The couple got engaged in 2020. In a sweet nod to their blended family, Tom popped the question with a ring featuring five tiny hidden diamonds underneath.

“Engaged!!! @tom_bernthal, you are my everything,” Sheryl wrote on Instagram at the time, alongside a sweet black and white photo of the pair. “I could not love you more.”

The Lean In: Women, Work, and the Will to Lead author previously said she “could barely imagine dating again, much less getting married” after her late husband’s death, but Rob “had a different idea.”

“He just knew I had to meet you,” Sheryl wrote in a love letter to Tom published by Good Housekeeping in 2021. “When I shook your hand for the first time, I had no clue that you would be the one to change my life.”

She added, “Together, we have found a new path forward, one filled with so much gratitude and optimism.”

As earlier said, Sheryl Sandberg and Tom Bernthal got married on August 20, 2022, in Wyoming.

In an Instagram post, Sheryl, 52,  shared a snap of herself and her new husband in a woodsy setting with the caption, “MARRIED” with several red heart emojis.”

For the big day, the bride wore a cap-sleeve lace gown, while the groom wore a black suit and cowboy boots.

Tom, 50, shared the same shot on his own Instagram page, writing “After both experiencing loss, @sherylsandberg and I weren’t sure we would ever find love again. Over the last three years, we’ve merged our lives and blended our families. Our wedding today was a dream come true.”

He later told People, “It is our wedding as the seven of us,” referring to his three kids and Sheryl’s son and a daughter—who all served as members of the bridal party.

Sheryl and Tom began dating in 2019. They were introduced by her brother-in-law Rob Goldberg, who according to People, served as co-officiant of their wedding.

How many kids do Sheryl Sandberg and Tom Bernthal have?

Sandberg and Bernthal do not have a child together as of the time of this article. The two surely have plans of getting kids in the future.

However, individually, the two make a family of seven. Bernthal is divorced and has three children. Sheryl Sandberg also has two children (a son and a daughter) with her late husband Dave Goldberg.