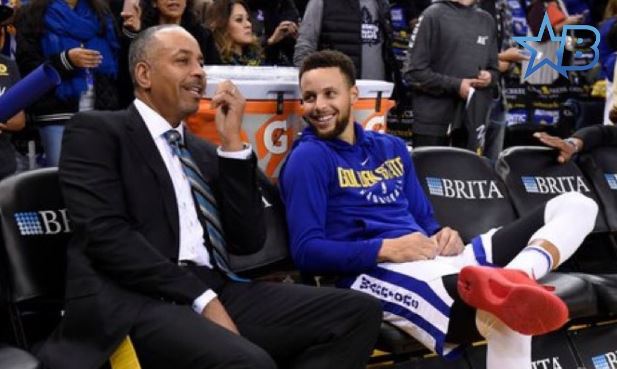 NBA superstar, Steph Curry’s father Dell stole the show at the NBA Finals as he was spotted with a new boo following his divorce from Sony Curry.

Steph Curry may have been the star of Game 4 of the NBA Finals on Friday, but Steph Curry’s dad was the one getting all the attention online.

During the first half of the game, the Boston Celtics were beating the Golden State Warriors 54-49, and even though the lead was small, fans were already convinced Jayson Tatum and his team were poised to take a 3-1 series lead last night. But, as things got down to the wire, Steph got to work, putting up a whopping 43 points and winning the game 107-97 as the series heads back to California next week.

But, along with fans praising the 3-point powerhouse on social media, they were also commenting on another member of his family: Steph’s father, Dell Curry.

The newly-divorced father of three was, of course, in attendance on Friday night to support his son, just like he always has been. While NBA fans are used to seeing him celebrating on the sidelines with his estranged wife and Steph’s mother, Sonya Curry, this time around was a little different, with the 57-year-old seemingly debuting in a new relationship.

Well, Dell and Sonya Curry were swapping spouses at the night. We just don’t know if they are doing it like responsible adults or if they are doing it out of spite. Whatever the case may be, Stephen Curry is right in the middle of it because his name is getting dragged with mentions of his parents’ post-marital scandal. You hate to see it.

As he celebrated one of Stephen Curry’s many great buckets from last Friday, Dell Curry appears to put his arm around a blonde woman. Initially, it wasn’t that important because he is already divorced. However, the screen grabs tell an entirely different story. The woman standing next to Dell is presumably his new girlfriend but Twitter users saw something strangely familiar about her.

We don’t know much about the woman Dell was spotted with at the game, but it’s probably pretty serious if he’s willing to take her to such a major event while supporting his son.

To those who don’t know, Sonya Curry is currently dating Steven Johnson, one of Dell Curry’s friends from Virginia Tech. They used to go watch Seth Curry’s Duke games. Both of Steph’s parents appeared with their respective new couples last Friday at TD Garden. But there’s more.

Twitter users quickly started piecing things together as they realized that Steven Johnson was actually married to Dell Curry’s blonde girlfriend from last night. At least the photo evidence that many users are sharing seems to point to this fact.

Dell and Sonya Curry crumbled amid accusations of infidelity. Stephen Curry’s family has been a focus throughout his career, but things looked different with the Warriors back in the Finals for the first time in three years.