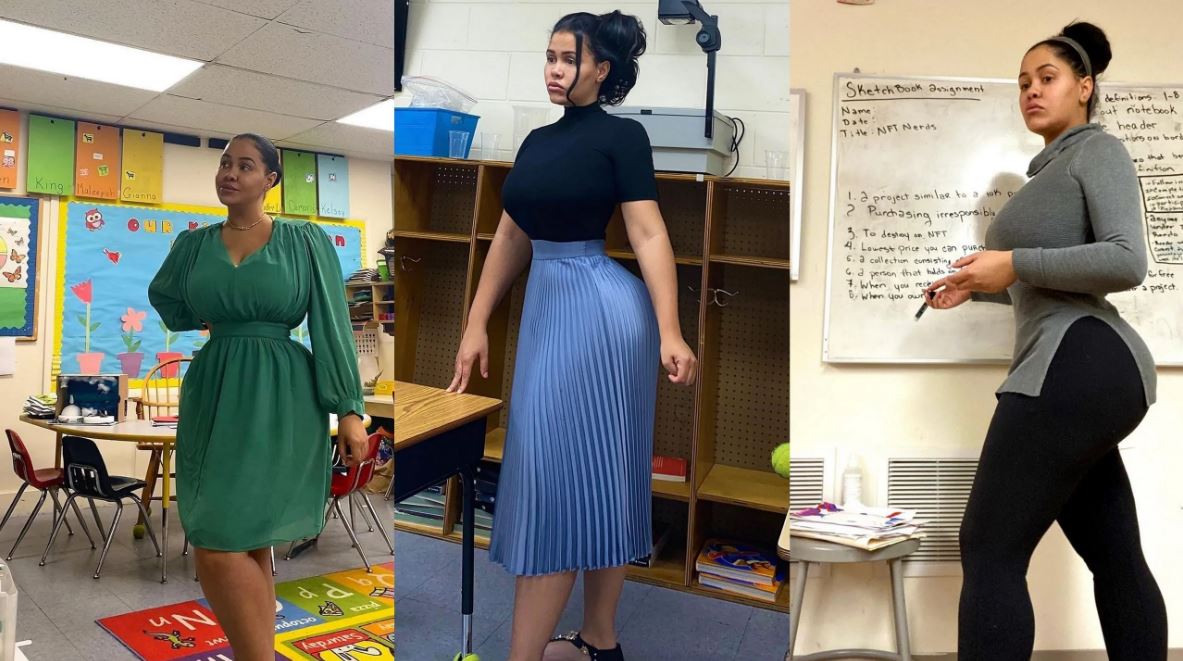 Who is Toyboxdollz? Here are some biography facts about the New Jersey preschool art teacher causing a stir on the Internet.

An elementary school educator has been blasted for teaching in tight clothing, with some outraged parents describing her as “desperate” and “attention-seeking.”

The New Jersey teacher — who has not disclosed her full name — has clocked over 1 million followers on her @ToyboxDollz Instagram account, where she shares photos of her figure-hugging ensembles, often taken in her classroom.

In some saucy snaps, the buxom brunette can be seen flaunting her figure up against a whiteboard. In other images, her students are visible inside the classroom, although their faces are not identifiable.

Many have praised the body-confident educator for her fashion prowess, but some parents on social media say she should not be wearing such outfits around minors.

“You’re in a classroom taking Instagram pictures with your a– out,” one ranted beneath an eye-popping “booty” photo. “Showing pictures in the class with your butt in the air is very inappropriate!”

However, the teacher has hit back, sharing a live, 14-minute video to her @ToyboxDollz account defending her Instagram images. “I have seen some men say some crazy, mean stuff, but I teach babies and there are no haters in the classroom thinking of that,” the brunette — who specializes in art education — declared.

“I’m a really, really good teacher,” she continued. “I had students emailing me during the summer asking me for homework. They love art. I love teaching art. I love working with children to create art.”

Here are 10 things to know about ToyBox Dollz

#1. Toyboxdollz’s real name is Roxsana Diaz. She was born on April 2 but her exact age is not known yet. She gained fame for her physique.

#2. She is originally from Puerto Rico and currently lives and works in Pennsauken Township, New Jersey.

#3. Toyboxdollz is an artist and a kindergarten teacher.

#4. She has done work for artists such as Lil Yatchy, Gillie Da Kid, and Wallo among others.

#5. Parents and netizens wanted her fired from teaching.

Under both New Jersey and federal labor law, it would be illegal for a school to fire a teacher based on their physical appearance, which is perhaps why there’s been no action taken against the supposed complaints that have been made in regards to the woman’s looks.

In less than 48 hours since she started gaining traction on the internet, Toyboxdollz has amassed over 1 million followers on Instagram. Aside from displaying her hourglass figure, she shares her paintings and her artworks that are simply mindblowing. Her IG account is @toyboxdollz.

She has not only gained followings on IG, but on TikTok, and YouTube as well. She talks about body positivity in most of her YouTube videos. Her IG bio says she’s an anti-bullying advocate. She has close to 8K subscribers on her YouTube channel with the name ‘ToyBox Dollz” and close to 50K followers on TikTok with the handle “Toyboxdollz“. On Twitter, she has over 15K followers on her handle @ToyBoxDollz.

#8. She is a mother of one. The name or pictures of her daughter and her baby daddy is not known yet.

#9. Her net worth is not known yet but she makes money as a teacher and from selling her artworks. It’s likely she has made thousands from selling on NFT. She also earns money for being an influencer.

#10. It is rumored that she has undergone plastic surgery to enlarge her butt.