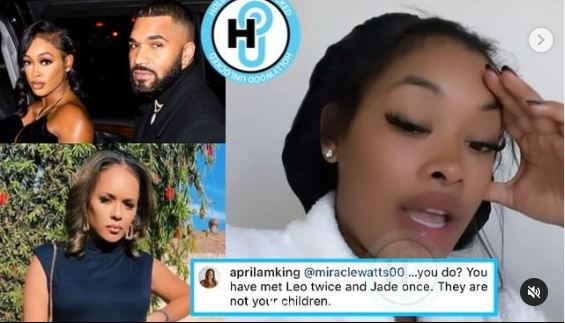 Tyler Lepley’s ex-fianceé April King and his new boo Miracle Watts are beefing after Miracle claimed that April’s kids were also hers.

You may recall, that Tyler Lepley was previously engaged to his longtime fianceé and Hollywood talent agent April King. They share two children together — one who was just 8 months old when Ty allegedly ended things for Miracle.

Miracle and Tyler have been together for over a year now and the new couple announced they were expecting.

A few days ago, Miracle got on Instagram to give motivation to the entrepreneurial girls who are “waiting for better days.” In her video, she said she can’t give up because she’s “got kids to feed.”

A fan who needed to understand things in-depth asked her if she already had kids because she heard her saying ‘Kids’. Well, April ended up jumping in her comments to let her know, “My kids are not your kids.” April added that Watts has only met her son twice and her daughter once.

Miracle Watts then replied to April, she noted that she wasn’t even referring to her kids, and even if she was, “as a woman and a mother you should feel good about someone who wants to embrace your children and include them as a family”.