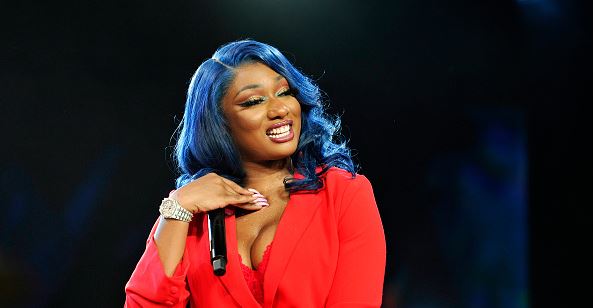 Who all has Megan Thee Stallion dated over the years? Here’s the list of famous men the female rapper has been in a relationship with.

Since then, her career has continued to grow, and so has her dating history.

Over the years, the Savage rapper has been seen in multiple relationships.

Megan Thee Stallion’s boyfriend list: Who has the rapper dated?

In 2020, fans speculated that the rapper and G-Eazy were an item after the two were spotted getting cozy on his Instagram Story. In the video, the two are laying on each other on a couch, and the “No Limit” rapper kisses Megan numerous times on the cheek.

Apparently, this PDA video was enough to fuel speculation that the stars could be something more…

But, Megan shut that rumor down faster than she drops it low. “Lol alright nowww y’all got all y’all jokes out but I am not f–king G-Eazy [sic],” she tweeted.

When a fan asked why G-Eazy was “sucking the makeup off [her] right cheek,” she responded, “He like Fenty,” referring to Rihanna’s Fenty Beauty collection. Case closed.

Before receiving some (friendly?) kisses from G-Eazy, Megan was previously in a relationship with fellow rapper Moneybagg Yo. The Memphis native recently appeared on Beats 1 and host Ebro Darden asked why the two decided to call it quits.

Though the former couple decided to end their affair, Moneybagg said that they have no hard feelings towards one another. “It didn’t work but I always wish her the best. I’m really proud of her. The Megan I know and the Megan ya’ll know are two different things. It’s still love, we just didn’t see eye to eye,” Moneybagg shared.

Megan and Moneybagg first sparked romance rumors in early 2019 and regularly posted PDA pics of each other on social media. In December, the exes unfollowed each other on Instagram, which is a universal sign that a relationship is over.

The songstress was also linked to another singer in 2019 after a video was circulating online of Hot Girl Meg hanging out with Trey Songz. When it was suggested that the two were more than friends, she tweeted, “Why y’all want me to be a ‘hoe’ so bad?”

She added: “Lol I’ve only dated ONE person y’all know about. All that other s–t is RUMORS [and] LIES … I ain’t addressing s–t else bye.”

In June 2019, Megan was also linked to Chris Brown’s ex-girlfriend Indyamarie. Page Six reported that the two were together at the the Pretty Little Thing BET launch party. “They’ve been posting thirsty comments lately on social media,” a source told the outlet.

Arguably one of her most publicized relationships came in 2020 after rumors started to spread that she was dating Tory Lanez.

The two were in a highly controversial relationship, however, Megan confirmed later on that they were never romantically involved.

“We were not in a relationship. Truthfully, I was shocked that I ended up in that place,” she wrote in an emotional essay published by The New York Times.

In February 2021, it was revealed that Megan had started a relationship with Jordan Kyle Lanier Thorpe, also known as Pardison Fontaine.

Before Pardi (real name: Jorden Kyle Lanier Thorpe), Megan dated another rapper named Moneybagg Yo. The pair were together for several months but called off the relationship in November 2019. The following April, Megan met Pardison when they began working on “Savage Remix (featuring Beyoncé).”

Megan and Pardison went on to work together again on her and Cardi B’s August 2020 hit “WAP.” Around the same time, rumors began swirling that the artists were more than collaborators. Some of Megan’s fans even criticized their relationship online, fearing the “Backin’ It Up” rapper was holding his girlfriend back. In February 2021, Megan jumped to his defense via Instagram Live.

“I didn’t like what they were trying to say about Pardi,” the “Hot Girl Summer” artist said. “‘Cause he is so calm and so sweet and very protective … That’s my boo, and I really like him.”

Megan then reminded her fans that she “never said hot girls can’t have boyfriends” before confirming they’re an item.

Overall, no matter who the rapper is dating or romantically involved with … it’s no one’s damn business. And, that’s some real hot girl s–t.