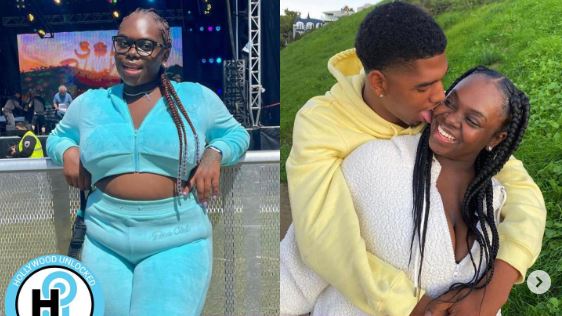 Snoop Dogg’s daughter Cori Broadus is fed up with the trolls talking about her relationship and how she keeps her boyfriend Wayne Duece.

Cori is one of Snoop Dogg’s four children. Her mother’s name is Shante Broadus.

Snoop Dogg’s daughter and an aspiring music artist, Cori Broadus, is currently dating Wayne Duece, born Dwayne Polk. They’ve been together in a relationship since 2018.

Since the two got together, she has been trolled mostly for the fact that she is a celebrity kid. If it’s not about her weight, it’s mostly about her boyfriend.

Taking to her Instagram Story, Cori said, “Y’all are so miserable and it’s so sad. It’s so hard not to let ppl comments get to you cause you know deep down they struggling but I’m still human and words hurt.”

In a second post, Cori said, “Y’all love saying a n***a must like me cause my daddy Snoop Dogg, like why can’t he just love me for me.. It’s deeper than just being his daughter. I’m my own person.”

Well, this is not the first time Cori is facing criticism as she has really suffered for being a daughter of a celebrity – a legend and a famous rapper to be precise.

Back in 2021, Cori Broadus spoke out against body shamers who bombard her social media with negativity.

The daughter of Snoop Dogg and Shante Broadus received a message in her DMs that she decided to share to call out people who attempt to tear down her self-confidence. The Instagram user recommended that she get some work done to her breasts, telling Cori that she has the money to make it happen. Instead, the singer and influencer put the woman’s message and profile on blast, sending her own message in response to “miserable” detractors who have so much to say about her.

She went on to tell everyone to “embrace what you got” before joking that she’s too scared to get any kind of surgery anyway.

Cori has talked about embracing her natural body before, specifically her breasts, telling people on Instagram that “Perfect boobs don’t have nothing to do w size or shape, It’s who they’re attached to [sic].”

While she handled this criticism well, the teen has been honest about the way her mental health has been impacted by people’s comments about her looks, along with what she’s had to endure having lupus. In May, she admitted in one of her Instagram Live ‘Girl Chat’ videos that she attempted to take her life earlier this year because of her depression.

She added, “I remember I got on social media when I was 13, and my mom and dad they didn’t want me to because I wasn’t strong in there. I got on there and I got super bullied. People used to always talk about me: ‘You’re fat, you’re ugly, you’re dark, you’re this, you’re that.’ And I used to cry. And I mean cry. At 13 I was ready to die. Just so sad crying to my mom like, ‘mom I’m so ugly. Why? Why did you have me? Why do I look like this? Why don’t I look like my brothers?’ I hated everything about me.”

Cori has since worked to feel comfortable in the skin she’s in, telling her followers in 2019 that she was finally ready to embrace herself. But she, like most people with depression, has battled on and off with having her health impacted by the ups and downs of life. After her recent situation, which ended with her having to go to a facility for a short time after being put on a 5150 hold and seeing a therapist, she says she’s in a much better place. She’s making an effort to fortify herself with the help of her faith so that she can cope better, and so that people like the woman in her DMs can no longer shake her the way they used to.

“My focus is getting my mental right because every ball that’s thrown at me hits me right in my face and I’m sitting here like ‘What do I do?’ Like, I don’t know how to dodge and duck and all that. When stuff gets hard…I just don’t know how to handle it. That’s really what I’m working on now, is handling life, being an adult, not just trying to give up so easy,” she said.

“Your mind is very powerful, so just appreciate your life because we only get one,” she added. “When things get hard just pray. But taking your life is not worth it and it’s not ok.”