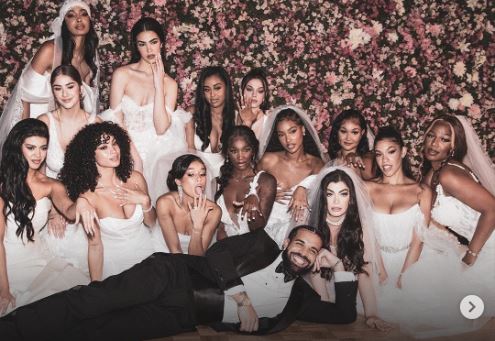 Drake‘s list of girlfriends is really really long! The tall list of women Drake has dated will leave you astounded – read on for more details

Aubrey Drake Graham is a Canadian rapper, singer, and actor. An influential figure in modern popular music, Drake has been credited for popularizing singing and R&B sensibilities in hip hop.

Fans of “Way 2 Sexy” rapper Drake are constantly wondering who he’s dating, and with a closet full of Hermès bags for his future wife, it’s not a huge surprise. However, the better question may be: Who hasn’t Drake dated?

The child actor-turned-hip-hop-icon has been rumored to be with several women in the music industry — that is, when he is not busy feuding (Pusha-T, Kanye West, and Meek Mill, we’re looking at you).

One of the biggest rumors regarding Drake’s relationship history involves his Young Money collaborator Nicki Minaj. However, Nicki quickly shot down those rumors in their song, “Only,” claiming that she has never been involved with Drake. Ouch!

Don’t worry, we’ll break it all down for you below.

First, let’s go all the way back to 2005 when a then 19-year-old Drake (real name: Aubrey Graham) was linked to actress Tika Sumpter, and then to Jade Lee the following year.

In 2013, he supposedly hooked up with actress Kat Dennings, Miracle Watts, Cyn Santana, and Tatyana Ali. Whew, we are out of breath.

Drake’s most serious (public) relationship was with Rihanna.

The former Degrassi actor has never hidden his love for Rihanna. Following her split from Chris Brown, Drake, and the “Pon De Replay” singer were spotted on a date in 2009. However, the love was not reciprocated at first, with Drake releasing his track “Fireworks” about his heartbreak.

By 2017, Drake had moved on with another famous beauty: The one and only Jennifer Lopez. Since then, Drake has continued with his playboy ways, reportedly dating Brittany Renner, Bella Harris, and model Imaan Hammam in the past few years.

In 2020, it appeared that Drake was single and ready to mingle. Rumors of him and 19-year-old model Bella Harris, who is the daughter of music producer Jimmy Jam Harris, swirled for a bit, but things with the young beauty eventually fizzled out.

Bella was hardly Drake’s biggest concern, however, as he also revealed that he was the father of a 2-year-old son around that same time!

Drake secretly welcomed his first-born Adonis with baby mama Sophie Brussaux in 2018 — and has been focused on co-parenting with the former adult film star ever since.

“You have the biggest heart and that is your greatest gift. It’s impossible to always control your surroundings, but when you shift the focus to how you want to feel, everything will conspire to assist you,” he wrote about Adonis on Instagram back in 2020.

After the world got used to the idea of Drake being a pappy, the Canadian rapper started a romance with Johanna Leia, the mother of high school basketball star and NBA prospect Amari Bailey. The pair were first spotted in July 2021 on a low-key, yet lavish dinner date. However, it appears that Drake’s coupledom with Johanna was short-lived. Radar Online reports that Drake and Johanna went their separate ways in October 2021.

So, who is Drake dating in 2022? New details have just emerged.

Radar Online reports that Drake already had a new woman in the picture as of October 2021. The outlet shares that a Palestinian-Canadian group — which was hired by Drake’s new beau — serenaded the star at his party.

“It’s his new fling that sent him the Arabic dabke to his house for his bday surprise,” the source told the outlet.

However, not too many details about Drake’s new squeeze are known. The site shares that the mystery woman, who has Canadian roots, currently lives in Miami. And that’s where the details end.

Only time will tell if the woman’s identity will be revealed and if Drake decides she’s the one. If you ask us, don’t hold your breath.