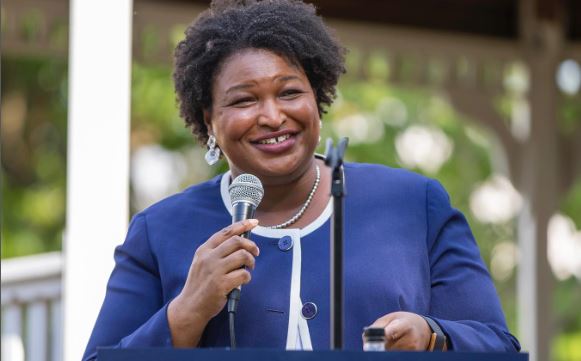 Is Stacey Abram married? Does Stacey Abram have children? Read more about the personal life of the Democratic Nominee for Governor of Georgia.

The 48-year-old has set her sights on the title of the Governor of Georgia for the second time. Since she is an influential politician in the world, many would want to know the man she is married to and whether she has children. So, read on to find out who Stacey Abrams’ husband is.

Who is Stacey Abrams?

In 2018, Abrams ran for governor of Georgia against then-Secretary of State Brian Kemp.

Kemp pulled off a narrow victory over Abrams by 55,000 votes.

Kemp’s narrow victory reignited the debate about how a history of voter suppression in Georgia may have shaped the outcome.

After the loss, Abrams founded Fair Fight Action, an organization attempting to tackle the long-running issue.

She had already been championing voter registration since 2014 through her New Georgia Project.

Abrams was credited with a large boost in Democratic votes in Georgia and an estimated 800,000 new voter registrations for the 2020 presidential election.

On December 1, 2021, Stacey Abrams declared that she intends to run for Governor of Georgia for a second time.

Abrams is not married and rarely discusses her relationship status.

She mentioned in a 2021 interview that a budding relationship had ended just before the Covid pandemic took hold.

The 47-year-old is largely dedicated to her work, but told CBS This Morning host Gayle King: “If a guy realizes I’m out here and wants to drop me a note, I’m looking forward to meeting him.’

In her memoir, she also revealed that she thought she would be in love and have children by the age of 28.

Stacey Abrams is not from a wealthy family

Stacey Abrams grew up in Gulfport, Mississippi, one of six children whose parents had three tenets: go to church, go to school, and take care of each other. Her father, a shipyard worker, and mother, a college librarian, faced financial hardships of their own, yet they taught their children the value of service to others.

No matter how much they struggled to make ends meet, Stacey and her siblings were taught that someone always had less and that it was their job to serve that person. Her parents were also steadfast in seeking the best possible educational opportunities – both for their children and themselves. Education and service, both of which remain central to Stacey’s identity today, was the impetus for the Abrams family’s move to Georgia.

What did she say about the Georgia runoff elections?

Abrams has been outspoken about the two Georgia runoff elections.

She tweeted: “GEORGIA: Watch and Share. I am counting on YOU to vote today. Let’s get it done!”

In an interview with Stephen Colbert on January 4, Abrams was confident the Democratic candidates will pull out the win.

Before the vote, she said: “I put my money on blue.”

And she was right – Ossoff and Warnock defeated Perdue and Loeffler, respectively, giving Democrats narrow control of the Senate.