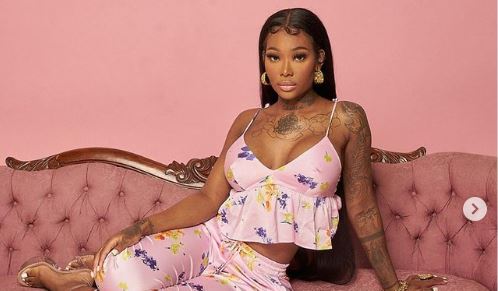 Summer, 26, who was nominated for Best Female R&B/Pop Artist, walked like an Egyptian down the carpet, in a gold mini skirt, golden symbol pasties, and gold earrings.

The fashion choice comes a day after the singer announced she’s pregnant with her second child.

Just a day earlier, she announced on Instagram Live that she is expecting.

“Very excited about it. And this is gonna be – I’m very very excited because it’s going to be different from how it was before. It’s really peaceful, really happy, lots of help, lots of love.”

Publicly, Summer Walker has been linked with two men with whom she shares her two kids. Summer’s most high-profile relationship was with London, known professionally as London on da Track.

Summer currently shares a 1-year-old daughter with her ex-boyfriend and producer, London on da Track, after being together for two years.

She is now expecting a child with her current lover, LVRD Pharoh, according to BET.

The No Love singer admitted she shared the news to get ahead of the speculation and rumors – something she was unable to do before baby number one.

“The only reason I’m even saying anything is that last time I felt very disrespected that people didn’t let me tell that myself,” she continued. Read on to know who LondonOnDaTrack and Lvrd Pharoh are and how they met Summer Walker.

Who is Summer Walker dating now?

Soon after Summer and her last boyfriend London on da Track broke up, it was rumored that she had a new man in her life.

His identity was later revealed as LVRD Pharaoh Larry, who is known as an American rapper.

In August 2021, Summer first revealed her new man and while she didn’t identify him at the time, the hitmaker said: “My career is doing good, My baby is healthy and beautiful. My man is doing everything that I need him to do plus more. Don’t even gotta ask.”

Just a few months later, in November 2021, the couple debuted face tattoos which each other’s names.

The 26-year-old R&B singer is expecting her second child with her current rapper boyfriend Larry, who is also known as rapper LVRD Pharoh.

Walker has over 24 tattoos on her face and body, ranging from new boyfriend LVRD Pharaoh’s real name Larry next to her eye. On Monday night (Nov. 22), the “Ex For A Reason” singer took to Instagram to show off her new ink, which read, “Larry” — the first name of her boyfriend rapper LVRD Pharoh.

Larry (Known as ‘LVRD Pharoh’, born b/w 1992-1995, Age: 26-29 Years) is a famous American rapper, singer, songwriter, social media influencer, musician, and entrepreneur from The United States of America. He is very popular in the country for his amazing and energetic raps. He launched various singles and music albums.

Who has Summer Walker dated before?

Walker used to be in a relationship with producer London on Da Track with whom she shares a 1-year-old daughter, but they split in the summer of 2021.

London, 29, known professionally as London on da Track, is an American record producer, rapper, and songwriter.

The producer has collaborated with some of rap’s biggest names including, Birdman, Lil Wayne, Lil Baby, Drake, Post Malone, 50 Cent, and 21 Savage among others.

In 2019, Walker and London began dating after he worked on the production of her debut album, Over It, of which he is also the executive producer.

The following year, Walker announced that she was expecting her first child, with her on-off-again boyfriend, London.

Just a week after going public with her pregnancy, Walker slammed her baby daddy London in a series of Instagram stories.

“I should really out this bum a** n**** @londonondatrack I could really f*** up life,” she wrote back in November.

In another post, she wrote: “black men gotta start doing better when it comes to being a father. my grandfather lame, my father lame, & dis n**** lame.”

She continued: “‘ol and i guess the cycle will just continue.”

“I guess n****s is still dealing with the shackles of mental slavery or some s***, back when white men ripped you from your families and beat you to death if you tried to protect them. It goes deep. S***s really sad,” Walker wrote.

“But at least I can afford to take care of my child,” she pointed out in another post.

She continued her attack, saying: “but that’s how it goes when everybody spiritually and mentally undeveloped. idk wtf I was thinking.

“Well I guess I’ll just put it all in an album, collect my millions, and be on my marry way,” she concluded adding an emoji of fingernails being polished.

Despite her stirring criticism about her baby daddy, on February 17, Walker shared an Instagram story praising London for “doing everything” he has to do for his child.

“Not that anybody asked me but I’m just SO proud of @londonondatrack doing everything & then some to tend to all his kids & me,” she wrote.

“Whether it’s driving 4 hours to pick one up, or flying 4 hours to see one or just do anything & everything I ask him to do. It’s just really great to see.”

London da the Track has amassed a $1.5million net worth, according to Celeb Net Worths. He’s believed to have gained most of his income from his work as a record producer.