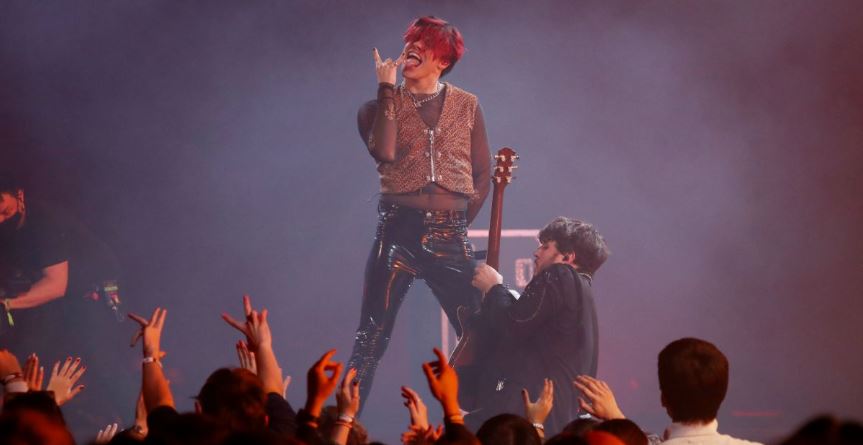 In recent years, few new artists in the alternative rock or punk rock spheres have made waves as Yungblud has. The English-born singer, musician, songwriter, and actor may only have a handful of projects under his belt, but he has already developed a cult-like following of fans worldwide thanks to his energetic music and unique stage presence.

Even when he doesn’t have thousands of fans eating out of the palm of his hand on stage, Yungblud’s personal life seems to be equally as glamorous and, well, downright cool. With that being said, who is he currently dating? Furthermore, what has Yungblud shared with fans about his sexuality? Let’s unpack all of the known details.

Who is Yungblud dating?

Yungblud’s latest romantic relationship is right up the alley of a star of his caliber. Indeed, the rocker is currently in a relationship with Jesse Jo Stark, a fellow musician as well as a designer who is the famous daughter of Richard and Laurie Lynn Stark. Her dynamic parental duo founded the luxury brand Chrome Hearts, which creates high-end clothing, jewelry, and lifestyle goods often composed of leather, sterling silver, and various exotic materials.

Jesse Jo was born on April 4, 1991, to Richard and Laurie Lynn in Los Angeles. She has two younger siblings named Frankie Belle and Kristian Jack Stark, and believe it or not, her godmother is the legendary Cher. Her parents’ brand has been catering to the elite of the music world since the 1980s, and in that time the Stark family has become close with some of the biggest names in the history of rock and roll.

As an independent musician, Jesse Jo has released two EPs and a slew of singles. Her 2021 EP “Down Your Drain” was actually recorded with former Sex Pistols guitarist Steve Jones, who is a longtime friend of the Starks. In the past, Jesse Jo has cited the Cramps, Loretta Lynn, and David Bowie as influences on her sound.

Jesse Jo also has a clothing brand of her own called Deadly Doll and frequently appears in advertisements for Chrome Hearts as well as her sister’s brand, Dipped In Blue Bikinis.

How did Yungblud and Jesse Jo Stark meet?

Details of how Yungblud and Jesse Jo actually first came into contact are unknown, but the first time that they appeared publicly together was when the former released his music video for “Strawberry Lipstick.” In that steamy video, Yungblud is draped in custom Chrome Hearts clothing from Jesse Jo’s family while she appears to be dominating him sexually.

After the video went live, Jesse Jo and Yungblud began posting about one another on social media much more frequently. Their pages are filled with cute snapshots of the two lounging around, attending events, and spending time with Jesse’s family, who seem to have taken a liking to the rocker, indicative by Jesse’s mother’s frequent comments of support on his Instagram page as well as on the official Chrome Hearts Instagram page.

Yungblud has been very candid with his fans over the years in terms of revealing his sexuality. In a 2019 interview with Attitude, Yungblud revealed that he identifies as “sexually fluid.”

However, in an interview with the same publication one year later, Yungblud clarified and told fans that he identifies as pansexual and polyamorous.

“My sexuality is mine and I’m proud of it,” he said at the time. “But, as I say, I probably would say that … I love everyone, I’m attracted to everyone.”

He elaborated on his experiences by adding, “I’ve never dated someone publicly who’s a guy, but I’ve definitely f–king, like, hooked up with people and been into it and loved it.”

Yungblud even attributed a portion of his sexual awakening to his ex-girlfriend, singer Halsey, whom he dated in 2019.

“She taught me so much, even about my sexuality,” he explained to Attitude. “The conversations we would have at night, she has such knowledge because she’s been openly bisexual for years … it’s so funny when you’re dating someone, yet [you] owe them a lot towards your sexuality; even though she is not a man, she made me go, ‘Oh my God, I probably like am into that.'”