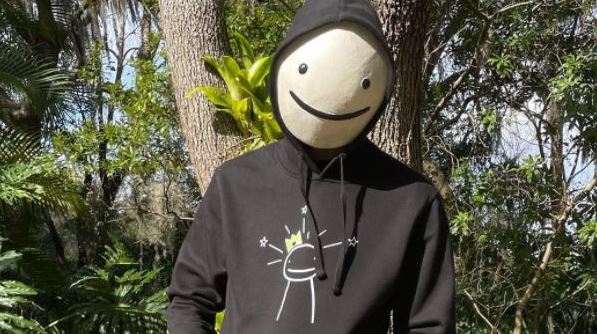 Despite his massive following online, Minecraft YouTuber Dream has continued to keep his face a mystery, never revealing what he looks like – outside of some small teases. That is, until now. At long last, Dream finally lifted the mask on October 2.

Dream is an American YouTuber and vocalist known for his Minecraft collaborations and manhunts.

Fandom revealed his real name as Clay. He is also best known online as DreamWasTaken, formerly known as DreamTraps and GameBreakersMC.

He grew up with a 15-year-old sister nicknamed “Drista” by TommyInnit, a portmanteau of “Dream” and “sista”. He also has an older sister and a younger brother. Clay has ADHD.

He was the quarterback of his high school flag football team and recreationally played basketball and soccer. He went to high school for 2 years & graduated in early 2018, he did not attend college because he felt that he knew enough about technology to get a job without a degree. He formerly worked for AppleCare.

Clay is over 6’2″ (189 centimeters) tall. He lives in the city of Orlando, Florida with his cat Patches & his best friend Sapnap. He is agnostic.

His channel is one of the fastest-growing channels in the history of YouTube, garnering over 10 million subscribers in a little over a year. He is part of the collaborative group “Dream Team” consisting of himself, GeorgeNotFound, and Sapnap.

For years now, his actual face has remained a mystery as one cannot point fingers at him when he’s seen in public. Well, he had his own reasons for remaining disguised.

His fans and other streamers in the gaming community had no clue about his real face but he had made hints of revealing his face to the public on several occasions.

Late on September 30, some of Dream’s closest friends posted videos to Twitter where they would FaceTime Dream for a private face reveal. Some of these creators have been waiting for over 10 years to see what their close friend looks like.

After years of working around the clock to keep his face hidden from the spotlight, Dream finally revealed the human behind the mask on October 2. Dream, real name Clay, lifted the iconic mask to share his face with the world after generating plenty of hype online.

“A lot of you are probably wondering why now?” he said to over 1.3 million viewers watching the premiere live. In short, his friend GeorgeNotFound was flying out to “meet for the first time.” Rather than having to hide away, Dream finally wanted to “start doing things” out in public. “Get out in the world, meet creators, be a person,” he joked.

On the content side of things, that means fans can expect to see more “IRL content” from Dream and his friends as they meet up with other personalities. Though for now, he doesn’t “plan on adding a face cam” to his ongoing Minecraft videos.

When was the Dream face reveal?

On September 19, Dream posted on his YouTube community tab that his next upload would be him revealing his face.

After much speculation, we finally got a date locked in. On October 2, at roughly 5PM PT, fans were able to get their first look at the famed Minecraft star after years of mystery and intrigue.