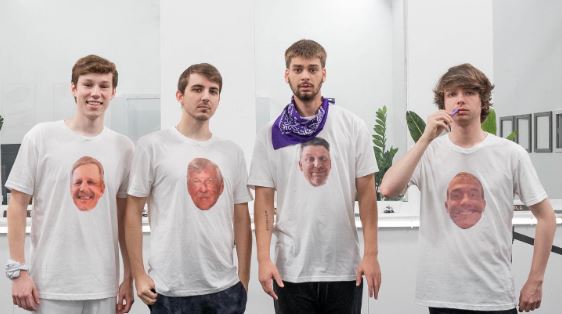 How much are MrBeast friends worth? YouTuber Jimmy Donaldson widely known as MrBeast and his crew members or friends have an impressive net worth.

MrBeast is an American YouTube star, philanthropist, and entrepreneur. Mr. Beast has a net worth of $100 million. MrBeast makes a minimum of $3 million per month from YouTube ads alone with the exception of in-video brand deals, according to Celebrity Net Worth.

Also known as Jimmy Donaldson, MrBeast is known for his YouTube stunts that give large sums of money away to friends or charity. He is considered the pioneer of philanthropic YouTube stunt videos. He is also one of the highest-paid YouTubers on the planet. In 2020 he earned $24 million from his YouTube channel, merchandise sales, and sponsorships with brands like Microsoft and Electronic Arts.

Jimmy reportedly invests the majority of his video earnings back into video production. He now spends as much as $300,000 producing one video, up from $10,000 a few years ago. His stunts tend to have a philanthropic angle, like giving money to strangers or adopting an entire shelter of rescue dogs.

Now that we’ve got this information about MrBeast and his wealth, let’s check out his friend’s net worth. Note that they are also millionaires. Read on for more.

Who are MrBeast’s friends?

If you follow MrBeast and have been watching his videos, you must have seen some faces who are always constant in his videos on his popular YouTube channel. These guys are Jimmy’s day-one friends whom the internet calls “The MrBeast Friends or Crew Members“.

In order to give away that much cash on a regular basis, you need a big operation. MrBeast employs multiple video editors and writers to work with big-name brands on six-figure deals. According to Distractify, the MrBeast team is made up of 30 people. But many of MrBeast’s team have left the brand due to one reason or the other.

The likes of Marcus, Jake The Viking, Ty, Sneako, Jake Weddle, Turner, Garrett, Ethan, Nate Anderson, and other former crew members have stopped working with Jimmy Donaldson (MrBeast). To find out why they left Jimmy following a series of allegations from MrBeast being a racist and using people to him firing some, click here to read why his old friends quit working with him.

Currently, the MrBeast friends and crew include Chris Tyson, Chandler Hallow, and Karl Jacobs. These constant MrBeast crews do stunts that no one dares to try. Read on to find out how much these top three friends of MrBeeast are worth.

Chris Tyson is one of Jimmy’s oldest friends. Long-time followers of the viral maestro would recognize Chris from his older videos.

Christopher Tyson, more commonly known on the internet as Chris is an American YouTube celebrity mainly known for being the co-host for the MrBeast YouTube channel, having appeared in most of the videos alongside Jimmy. He participates in a lot of the challenges and prank videos MrBeast makes and is one of the only people that are consistently on the channel. He also is the main host of the channel “Beast Reacts” (formerly BeastHacks).

Chris grew up in North Carolina and still lives there today. Chris and Jimmy Donaldson (MrBeast) created their channel in 2012 and since then the channel has grown to close to 100 million subscribers as of July 2022. He is reportedly MrBeast’s very first subscriber as told by Jimmy.

Chris is married to Katie Tyson. On June 18, 2020, Chris and his wife welcomed their first child together, Tucker Tyson. He is the only member out of the four main MrBeast crew members (others being Jimmy, Chandler, and Karl) that is a parent. On November 5th, 2020 he came out as bisexual on his alt-Twitter account

What is Chris Tyson’s net worth? Chris Tyson of MrBeast crew has an estimated net worth of $5 million. He owns 4 cats. He owns a white Tesla Model 3.

Karl Jacobs is an American YouTube personality known for being a major affiliate of MrBeast since 2020 and has been gaining fame since then for their collaborative videos. He initially appeared on MrBro‘s Last To Leave Halloween Candy Wins $10,000 challenge in 2019 and often served as a camera operator at that time. Karl is still part of the MrBeast crew and is not fired.

Karl is 23 years old and was born on July 19, 1998, in North Carolina, USA. He graduated from Fort Dorchester High School in 2016. For 2 years, he attended Portland Community College from 2016 to 2018 and studied multimedia. He started working as a salesman at Starlite Gaming from May to August 2016. From February 2014 to June 2017, Karl remained a review writer and editor for GameTZ.

Karl has an old YouTube channel called Game Patrol. He started streaming on Twitch under the username GamerBoyKarl in 2017.

After Jake The Viking‘s resignation, Karl was promoted to an on-screen member and has often been appearing as a major member of the MrBeast crew since 2020.

On September 11, 2020, Karl Jacobs founded his own standalone YouTube channel. However, it was only made public when he announced that he has a new YouTube channel on his Twitter page on December 2, 2020. The next day, he uploaded his first video, I Hunted LazarBeam on Dream SMP!

Karl is 5’11 (or roughly 180 cm), making him approximately as short as Chris Tyson. He has thick brown hair (at some point, it was dyed blonde) and gray eyes.

He is the most followed MrBeast crew on social media. He has over 4.7 million followers on his Instagram account “karljacobs“.

What is Karl Jacob’s net worth? Karl Jacobs has an estimated net worth of $3 million. He earns his money from his involvement in MrBeast’s videos. Also, he is a gamer, a social media influencer, and a Twitch personality.

Chandler Hallow is a YouTube star who is a frequent collaborator on the channel MrBeast and a major affiliate of the channel, appearing in many of Jimmy’s videos from 2018 onward.

According to Jimmy in a video with Kwebbelkop, Chandler was originally his janitor. After his debut in We Are Better Than Dude Perfect, he continued to appear in Jimmy’s videos since 2018 due to people really liking him.

In mid-2021, he had been appearing less frequently for unknown reasons but has later come back on a regular basis.

The 6.50 ft (195 cm) tall MrBeast friend is the second most followed among them on Instagram. His IG account “chandlerhallow” has 3.7 million followers.

He formerly dated Lauren Farquhar who is the sister of Katie Farquhar, Chris’ wife. On July 11, 2021, Chandler has publicly stated on his Instagram that he is engaged to Cara Davis.

Nolan Hansen is an affiliate of MrBeast known for initially appearing in I Spent $1,000,000 on Lottery Tickets and then for appearing in several videos ever since.

He describes himself as “The guy in MrBeast videos nobody knows” in his bio on his 328K followed Instagram account “nolans.rollin“.

He has a sister named Natalie.

What is Nolan Hansen’s net worth? Nolan from MrBeast crew has an estimated net worth of $700,000 – $1 million. He lost over $1M from MrBeast, surprisingly most from losing at bowling.