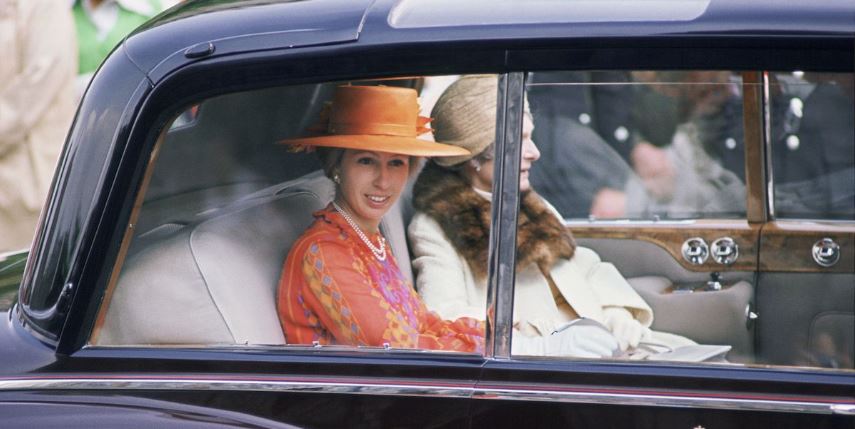 Season 4 of The Crown covers many of the major happenings involving the royal family from 1979 to 1990 — including Margaret Thatcher taking over as Prime Minister, Lord Mountbatten’s funeral, and the marriage of Prince Charles to Princess Diana. One ordeal the Netflix drama neglects entirely, however, is Princess Anne‘s kidnapping attempt in 1974.

Let’s take a closer look at the harrowing story that could have easily ended so differently.

On March 20, 1974 — just four months after Princess Anne married her first husband, Captain Mark Phillips — a man named Ian Ball attempted to kidnap the royal. She was returning to Buckingham Palace from a charity event on Pall Mall by a car that evening and was just yards away from the front gates when it happened.

Their car was forced to stop by a Ford Escort. The driver of that Escort was Ian Ball. When the Princess Royal’s car came to a stop, Ball jumped out and began firing a pistol.

“This car overtook us and stopped,” Princess Anne said in a TV interview with journalist Sir Michael Parkinson.

Anne’s personal police protection officer, Inspector James Beaton, jumped out to try to detain Ball, however, Beaton’s firearm, a Walther PPK, jammed, and he ended up being struck by one of Ball’s bullets.

Beaton wasn’t the only one to be hurt in the kidnapping attempt.

Anne’s chauffeur, Alex Callender, was shot as he tried to disarm Ball, as was Brian McConnell, a nearby tabloid journalist who attempted to intervene.

“There was an exchange of shots,” Princess Anne continued, adding that a shot by her police officer came scary close to her.

“The policeman got off one shot which I’m convinced came through the back of the car because that all hit me on the back of the head,” she said “So that was a good start!”

Ball then approached the car door with two handguns.

“He opened the door, and we had a sort of ‘discussion’ about where or where not we were going to go,” Anne, who was 23 at the time, explained, adding that she told Ball that it would ‘be much better if he just went away and we’d all forget about it.'”

“I said I don’t think I wanted to go,” she continued. “I was scrupulously polite because I thought it was silly to be too rude at that stage.”

When it was all said and done, Ball had shot Princess Anne’s chauffeur and two policemen.

“The whole thing rather collapsed in a sort of a heap,” the royal told Parkinson. “But I could reach the door handle from behind my head and I opened the door and literally pulled my feet over my head and did a sort of backward somersault onto the road.”

Amateur boxer Ronnie Russell also played a role in Ball’s capture when he ran to the scene, punched the would-be kidnapper in the head, and wrestled him to the ground.

After this, Police Constable Michael Hills arrived on the scene, and was shot by Ball too, but not before he had called for backup.

Detective Constable Peter Edmonds, who had been nearby, answered, gave chase, and finally arrested Ball.

Ultimately, Ball was taken into custody after he tried to flee the scene and was swarmed by police. If he had been successful in kidnapping Princess Anne, Ball had planned to ransom her for nearly $4 million, according to a note to Queen Elizabeth that was discovered in his pocket.

Ian Ball, who had a history of mental illness, appeared in court on April 4 and gave a statement about what motivated the attempted kidnapping.  “I would like to say that I did it because I wished to draw attention to the lack of facilities for treating mental illness under the National Health Service,” he said, according to Smithsonian magazine.

Ball pleaded guilty to attempted murder and kidnapping charges and was sentenced to a life term in a mental health facility.

What happened to Princess Anne’s guard and chauffeur?

For his actions, Inspector Beaton was awarded the George Cross by the Queen, who was visiting Indonesia when the incident occurred.

Police Constable Hills and amateur boxer Ronnie Russell were awarded the George Medal for their heroic effort in defending Princess Anne on that day.

The boxer Russell also had his mortgage paid off by the Queen in gratitude for saving her daughter.

“The medal is from the Queen, but I want to thank you as Anne’s mother,” Queen Elizabeth said to Russell at the time.