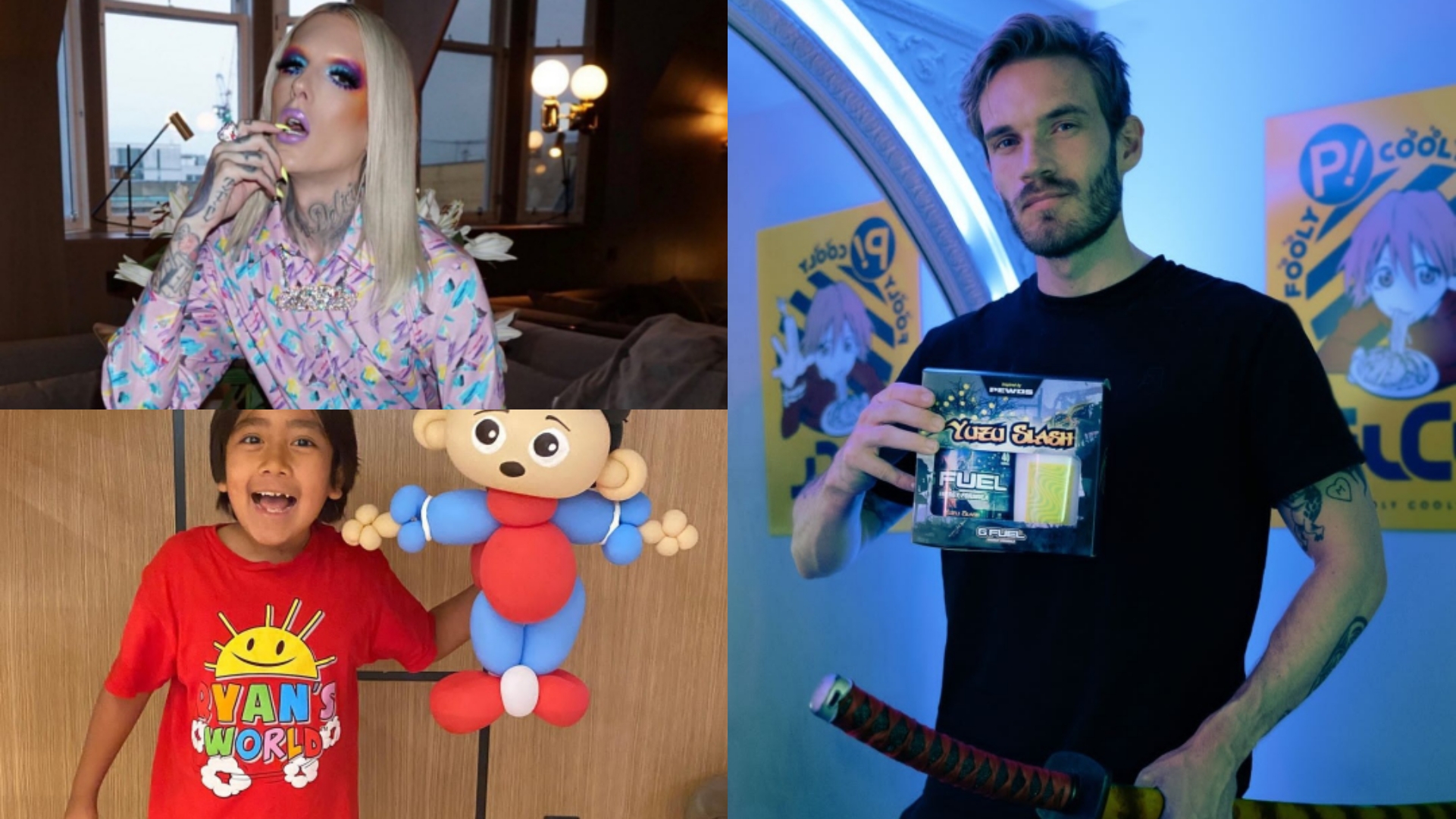 YouTube is a video sharing and social media platform owned by Google and has over the years made people millions and billions of dollars.

Content creators and musicians generate a large sum of money from this video-sharing platform.

Well, you must wonder how much these YouTubers are making or earning on this video-sharing platform.

In this article, you will get to the answer to the question “Who is the Richest YouTubers in the world?” and find out how much exactly he makes.

Liza Koshy started her YouTube channel after she went viral on Vine ( an American social networking short-form video hosting service). Within a short time, she gained millions of followers on the YouTube platform thanks to her funny videos.

Aside from being a YouTuber, Liza Koshy is also an actress having featured in Hulu’s “Freakish” and has a comedy series called “Liza On Demand” on YouTube.

Roman Atwood hails from Ohio and started filming and producing videos back in his high school days. He does vlogs about life and family.

He has for the past 6 years has posted a video on his first channel Roman Atwood but still a considerable amount of money from that day.

He is the second YouTuber to receive more than one Diamond Play Button. This plaque is given to YouTubers who surpass the 10 million subscribers mark.

Read Also: Is Chris Tyson Related To Jimmy, How Much Money Does He Make In MrBeast? 40 Fun Facts About Chris The Meme God

KSI is also known as Olajide Olayinka Williams is a British YouTuber, rapper, actor, and boxer. He started YouTube in 2008 where he was posting gaming commentary videos of FIFA. He did this from his parent’s house.

KSI was making a monthly income from his channel and decided to drop out of school to do YouTube full-time. His parents initially disapproved of his choice but later supported him.

As mentioned earlier, KSI is also a boxer and has fought three times.; two amateur fights and one professional fight.

His professional fight with Logan Paul ended in a split decision.

Blippi whose real name is Steve John is an American child entertainer and educator on YouTube. He was raised in Ellensburg, Washington, and had wanted to be a limousine driver and flight pilot when he was a child.

He went to the United States Air Force as a loadmaster for the C-17 Globemaster airplane.

The YouTube idea came to Blippi after he returned to Ellensburg and saw his 2-year-old nephew watching a low-quality YouTube video.

He posted his first video on January 27 2014 where he filmed, edited, and did the graphics for the video. Since then Blippi has gained millions of subscribers and billions of views from his channels.

The Blippi team would begin producing videos in Spanish, establish Blippi Toys, and begin offering DVDs and digital downloads from the Blippi website.

Read Also: 9 Friends Of MrBeast Crew Who Quit Working For Him And Why They Left

Jimmy Donaldson popularly known as Mr. Beast is an American YouTuber, businessman, and philanthropist. Mr. Beast was born in Kansas and was raised with his brother in Greenville, North Carolina.

In February 2012, while at the age of 13, Mr. Beast uploaded his first video on YouTube. His channel was focused on games like Minecraft and Call of Duty and also estimating the wealth of other YouTubers.

As a philanthropist, Mr. Beast does challenge videos where he gives out hundred of thousands of dollars to challengers.

Mr. Beast has 6 channels to his name and as a result, employed his close friends to help him run his channels.

Logan Alexander Paul popularly known as Logan Paul is an American YouTuber, social media personality, and boxer. He was born in Ohio.

Before starting his YouTube, Logan had a huge following on the video-sharing platform Vine. He then started his YouTube channel in 2013 where he shared compilation videos of his Vine content.

By January 2021, the channel has received over 22 million subscribers and 5.8 billion views, ranking as the 58th subscribed in the United States, and placing him among the top 140 subscribed channels on the platform.

Lilly is a Canadian comedian, former talk show host, and YouTuber. She was born in the Scarborough district of Toronto, Ontario.

In 2010, Lilly Singh created her YouTube channel called “Superwoman”. According to her, the name was a result of a childhood idea making her believe could achieve anything.

Lilly graduate from York University with a degree in Psychology.

She had planned to go back to graduate school as her parents wanted her to but she focused fully on her YouTube channel.

Fast Forward 2014, she was tanked no.39 on NMR’s Top 100 Channels and was nominated for a Shorty and Streamy Award.

In 2017, she won a People’s Choice Award for Favorite YouTube Star.

Jake Paul is the brother of Logan Paul and is also a YouTuber and professional boxer. He grew up in Ohio with his brother.

His brother, Logan Paul is also a popular YouTuber. Paul began by posting videos on Vine where he gained 5.3 million followers and 2 billion views.

Jake Paul created his YouTube channel in 2014 where he posted rap music, pranks, and controversies.

David is a YouTuber, podcaster, and Co-founder of a photography app called “Dispo”. He was born in Slovakia, Kosice but moved to Illinois with his family at the age of 6.

After graduating high school, David moved out of his parent’s house to Los Angeles to pursue full time his Vine career.

Dobrik in 2013 uploaded his first video on Vine after he collaborated with top creators on Vine. In 2015, he created his own YouTube channel where he shared comedy vlogs based on real-life situations and semi-scripted bits, featuring many of his former Vine collaborators.

Like Nastya is a young American YouTuber who was born and brought up in an upper-middle-class family from Krasnodar Kai, Russia.

Young Anastasia is currently in America pursuing her primary education. Her family moved to Florida a few years after her birth.

Anastasia was diagnosed with cerebral palsy and doctors believed she won’t be able to talk again. Luckily, her treatment was successful and she can speak properly now.

Anastasia with her parents runs different channels like Nastya, Like Nastya Vlog, and Like Nastya Show. She is one of the most followed YouTubers all over the world.

Preston is an American YouTuber and gamer by profession. He was popular for channels like PrestonGamez, Preston, Preston Playz, and TNBRfrags.

Preston was born and brought up in Texas. He has an adoptive father, four brothers, and a sister. One of his brothers, sister, and father have YouTube channels.

Preston is married to Brianna. The two got married in 2018. His wife also has a channel called BriannaPlayz.

James is an American makeup artist and beauty YouTuber. He was born in New York to parents Skip and Christine. James had a younger brother, Ian Jeffrey who is now a model.

James had a stuff school experience because he was bullied a lot. He finished high school in 2017.

His journey to becoming a makeup artist began when a friend asked him to do her make-up for a school dance. Since then James has been professionally doing make-up for others after he taught himself.

In 2015, James started his makeup YouTube channel sharing makeup tutorials. He created the channel while he worked as a  local makeup artist in New York.

Tyler Blevin known on the online space as Ninja is an American YouTuber, Twitch streamer, and a professional gamer.

He was born in Detriot to American parents of Welsh descent. After completing high school, Tyler decided to focus on play video games professionally.

In 2017, Blevins began streaming by participating in several esports teams in competitive play for Halo 3. In March 2018, his breakthrough came as a broke viewer count record on twitch.

Evan Fog is a Canadian YouTuber and video game commentator.

He was born in Toronto to parents of Asian descent, a Korean mum, and a Chinese father.

He dropped out to do YouTube full-time. His parents were worried after he decided to drop out of school and do YouTube.

In 2015, his channel Vanoss Gaming surpass 10 Million subscribers. That same year, he signed a deal with Jetpak.

Aside from YouTube, Evan plays ice hockey and guitar as a hobby.

Dude Perfect is an American comedy group in the USA. The group consists of former college roommates.

They all studied at Texas A&M University. The group consists of twins Cory and Coby Cotton, Garrett Hilbert, Cody Jones, and Tyler Toney.

The group began sharing videos in 2009 on YouTube. Their first video shared of the group performing trick shots at Tyler Toney’s ranch got 200k views in a week.

The channel is focused on comedy-related content. The two quit their jobs as engineers after completing college.

They shifted their attention to Christian evangelism with Cru, a TV host.

The duo made comedic videos for meeting after their first weekly encounter with Cru. They then shifted to YouTube doing comedic videos full time without Christian ministry.

Ryan Kaji is a 9-year-old boy who does toy reviews on his YouTube channel.

He started his YouTube channel in 2015 after watching other toy review channels and wondered why he wasn’t on YouTube.

His mum was a chemistry teacher who resigned from her job and focused on YouTube full time with her son.

Daniel Middleton is an English YouTuber, gamer, and video game commentator. His channel shares videos on video games such as Pokemon, Minecraft, and Roblox.

He was born in Aldershot in England and has two siblings. Middleton started his YouTube channel in 2012.

Initially, he named his channel “TheDiamondMinecraft” and later changed it in 2016 to his current name. His channel is listed among the top YouTube channel in the UK.

Mark Fischbach is an American YouTuber and podcast host. HE was born in Honolulu, Hawaii but began his career in Ohio.

In 2014, the MarkiplierGAME channel was listed on NewMediaRockstars Top 100 Channels, ranked at number 61.

That same year, Fischbach began his famous Five Nights at Freddy’s playthrough, which became his most popular playthrough to date, the first part having over 80 million views as of January 2021.

Fast forward to 2019, Mark partnered with Ethan Nestor and created a YouTube channel called “Unus Annus”. They uploaded one video every day for one year and by 2020 deleted the channel with all its content. The channel gained over 1 million subscribers and over 11 million views in its first week.

Felix Kjellberg popularly known as PewDiePie is a Swedish YouTuber known for his comedic videos and shows.

Born in Gothenburg Sweden, Felix rose to fame thanks to his hilarious commentary and reactions while playing video games.

Felix in his high school days was interested in arts and gaming. He used to skip school to his friend’s house to play video games.

After graduating from high school, he dropped out of university because he was not interested in the course he was studying.

Life become hard for Felix as he had supported himself by selling artwork, working at the harbor and hot dog stand.

In 2012, his breakthrough came as he had gained 5 million on his channel which was the most at the time. He is at the moment the third most subscribed channel.

Before breaking into the YouTube scene, Jeffrey Star took care of himself by doing make-up and modeling jobs. Jeffrey had a huge following on MySpace where he promoted his music and blogged about his life and fashion.

He uploaded his first video on YouTube in 2009 to promote his music career. Things didn’t go as planned as in 2014 he almost went bankrupt.

He then shifted his focus and used his life saving to start up a cosmetic brand, Jeffrey Star Cosmetics. He used his channel to promote it and now makes an estimated $100 million a year.