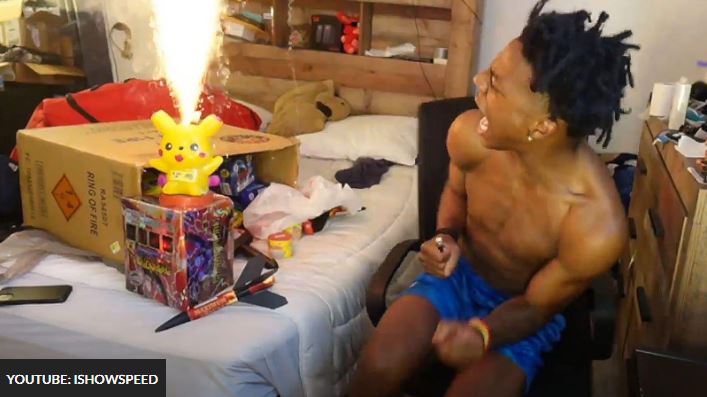 In the spirit of Independence Day, popular American YouTuber ‘iShowSpeed ‘ decided to light up a Pikachu-themed firework in his bedroom, igniting bedlam that prompted a visit from his local Fire Department.

iShowSpeed is a hugely popular YouTuber who boasts over 9 million subscribers on his main channel.

Speed is best known for his chaotic live streams, which once saw the influencer booted out of a theme park after broadcasting his boisterous ride on a roller coaster.

In his latest on-stream shenanigan, the YouTuber shared his July 4th fireworks haul during a celebratory Independence Day broadcast… but it didn’t end with applause.

During his stream, Speed lit up a Pikachu-shaped firework that spouted sparks from the top of its head. At first, it seemed like nothing more than a simple fountain — but Speed began to panic when the Pokemon turned up the heat.

The Pikachu began spouting sparks from four different openings and even started spinning around, falling off his bed and onto the carpeted floor.

Speed called for his mother in the midst of the chaos, who screamed and appeared to worry that a fire may have started from the firework.

After a heated conversation with her son, the house could be seen filling with smoke. The two were later gifted a visit from their local fire department, which viewers could see searching Speed’s room for damage.

Luckily, both Speed and his mother appear to be alright, although it’s unclear how much damage was done to the home at the time of writing.

Speed has posted to Twitter asking his fans to pray for him.

The moment has even sparked a response from fellow influencer KSI, who reacted with a Tweet hoping the YouTuber and his mother are safe and sound.

Fans are sending the streamer their best wishes following the explosive broadcast, which has already racked up nearly half a million views just over an hour after being steamed.