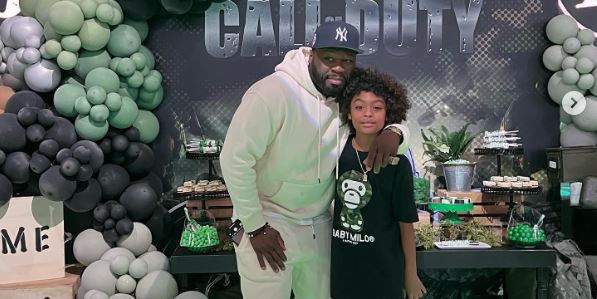 Rapper 50 Cent has celebrated his son’s 10th birthday. Chris Brown & Bow Wow’s daughters were in attendance at the party.

Usually, 50 Cent’s Instagram page is filled with antics, but this time, he used it for the greater good. On September 2, 2022, the 47-year-old shared pictures from his son’s birthday party. Sire Jackson, Fif’s youngest child, turned ten years old recently, and his father threw him an event he’d never forget.

50, whose real name is Curtis James Jackson III, shared pictures from the gathering with his 28.2 million followers. His caption read, “My Boy [Sire Jackson] turned 10 yesterday. He is getting so big I can’t believe how fast the time went.” The post was composed of 9 pictures and has already garnered over 125,000 likes.

Judging by the images, the party’s theme was based on “Call of Duty,” the first-person shooting video game. Decorated in black and green, the venue featured necessary props like protective equipment and war zone materials.  Additionally, in true celebrity fashion, a couple of famous kids stopped by to join in on the festivities. Chris Brown‘s eldest daughter, Royalty was there along with Bow Wow’s daughter, Shai Moss. All three of the children posed for a picture wearing military-colored clothing.

Appreciative of what his father had done for him, Sire hopped in the comments and wrote, “Thank you for the best party ever Dad! Love you! [red heart and praising hands emojis].”

Who is Sire Jackson’s mom?

50 Cent shares his son Sire Jackson with Daphne Joy. The duo is nothing but exes and co-parents.

50 Cent and ex-girlfriend and baby mama Daphne Joy have had an infamously difficult relationship, but it seems as though they’re finally on good terms and can celebrate their son Sire together. On Easter Sunday (in 2021), the rap legend posted a photo series of Daphne and Sire’s mirror selfies and a final photo of Sire at a basketball game. “Happy Easter God bless, my baby is getting so big, look at him,” he captioned the post, giving the public a constant update on his son’s growth.

Daphne also posted a photo of Sire’s easter egg on her Instagram story, which featured him taking a tiny hammer to a golden-clad easter egg that read his name across it. All three were certainly thankful for the family this Easter, and it seems everyone had a lot to celebrate.

Daphne and 50 Cent had Sire in 2012 but made headlines in 2013 when the rapper was facing serious domestic violence and vandalism charges.

Allegedly, 50 Cent broke into Daphne’s Toluca Lake, California home, repeatedly kicking her and causing more than $7,000 in damage to her property. 50 Cent entered a plea deal and avoided jail time, and the two now live separate lives but happily co-parent their son Sire together. While they are no longer in a relationship, 50 Cent and Daphne Joy still clearly have a love for each other when it comes to raising their child.

In recent news regarding 50 Cent, the Power executive producer had to step into the feud between his show’s actors. After an encounter between Joseph Sikora and Gianno Paolo was captured on camera, the two’s drama was blasted across social media. This prompted Fif to chime in and make a statement. He wrote, “Oh sh*t, it’s up! Now I never like to start sh*t but you should sock him, Tommy. Wait I think this little n*gga Brayden got a knife. lol.”