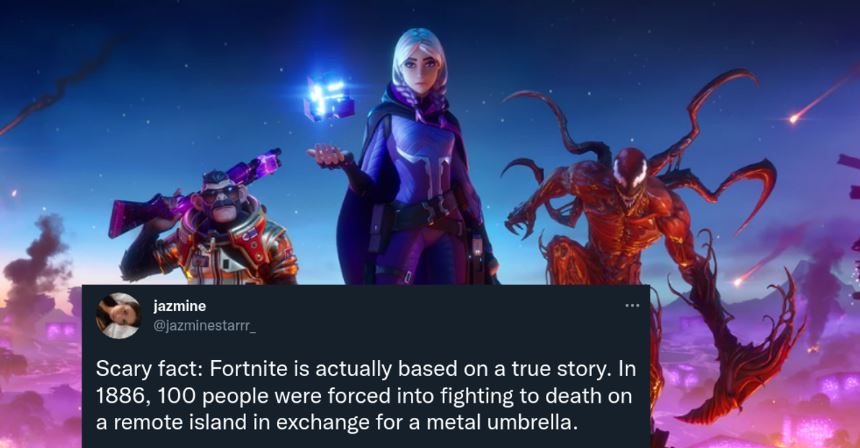 People are joking that ‘Fortnite’ is based on a true story, and the memes are great.

It’s common knowledge that if you want to get a movie made then you either need to base it off of an existing intellectual written property, remake a previously successful movie or TV show, or base it on a true story.

If flicks aren’t rooted in some DC or Marvel mythology, then they’re inspired by real-life events. Believe it or not, there are actually a lot of videogames based on true stories as well, but is Fortnite one of them?

Is ‘Fortnite’ based on a true story?

As insane as it sounds, there are actually people who want to know if Epic Games’ ridiculously popular battle royale game is based on a true story. It could be that those queries have been prompted by a recurring online joke.

Let’s make this clear: There are members of our species who sincerely want to know if a game where players jump out of a flying bus in order to build structures while shooting at one another with various guns, swinging around pick-axes, and watching ginormous Travis Scott concerts after building a mech to fight a giant monster, is somehow based on a true story.

To set the record straight, no ‘Fortnite’ is not based on a true story, unless you count this sick joke.

As a Google user, you can add suggestions for the names of locations at specific points on the map. While Big G admins tend to vet these submissions so we don’t end up with a typical internet communal contribution scenario, sometimes they slip through the cracks and stay up longer than they should.

Someone set the One World Trade Center’s name in NYC to “Tilted Towers.” A Fortnite Intel post describes how a journalist who stumbled upon the “Tilted Towers IRL” listing. Under its “reviews” section were a ton of jokes not about 9/11 (thankfully) but about the actual location in the game with references to Fortnite tactics and gameplay modes.

For the most part, it seems that the majority of people who are writing about Fortnite being based on a true story are clearly poking fun at the now-popular query. This has resulted in some pretty hilarious memes.

I guess if we’re going with the whole idea of a bunch of people being dropped off on an island to fend for themselves, one could say that Fortnite is basically the origin story of Australia or America. So maybe it actually is based on a true story after all.