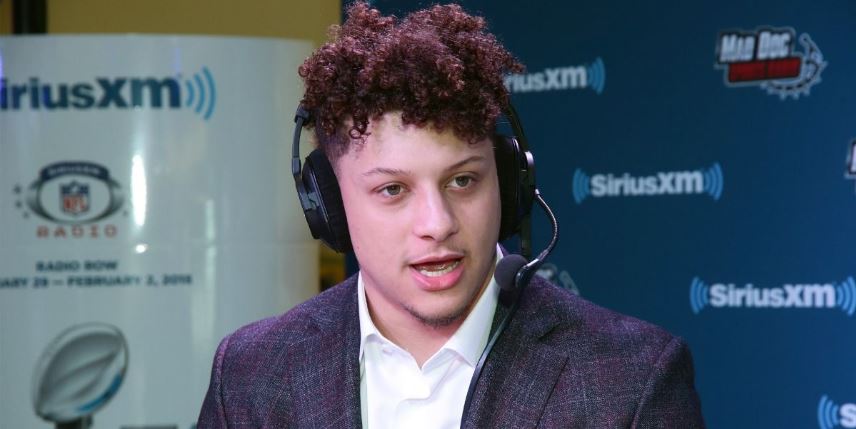 Who is Patrick Mahomes married to and does he have kids? Meet the NFL player‘s fitness enthusiast wife and their children.

Patrick Mahomes has become one of the brightest talents in the NFL in recent years.

He has played with the Kansas City Chiefs since he joined the league in 2017, and led the team to win the 2020 Super Bowl.

Who is Brittany Matthews?

Brittany Matthews was September 1, 1995, in Whitehouse in Texas.

She is a fitness enthusiast and an entrepreneur who studied B.S. Kinesiology at the university.

She is a regular at Kansas City Chiefs’ matches, often taking to the pitch to congratulate her beau Mahomes.

Away from the spotlight of being the girlfriend of the NFL’s new golden boy, Brittany also runs her own fitness business. Brittany Lynne Fitness sees the 27-year-old provide fitness programs for clients and guided workouts.

She is also the co-founder of the NFL sports team, Kansas City Current, and also, a clothing line called Skye Collections.

Murphy has a massive Instagram following, where she posts pictures of her supporting Mahomes at football games, along with images of their daughter. On the photo-sharing site alone, Brittany has over one million followers.

How long has she been dating Patrick Mahomes?

The couple started dating all the way back in April 2012, and they’re childhood sweethearts.

Brittany and Patrick have been together since high school. The couple started dating at Whitehouse High School in Texas when Patrick was a sophomore and Brittany was a junior.

She went on to play football at the University of Texas Tyler and then relocated to Iceland for her soccer career.

The couple eventually moved in together after Brittany finished her season in Iceland and relocated to Kansas City to be with Patrick.

When did Patrick and Brittany get married?

Patrick and Brittany officially became husband and wife on March 12, 2022.

The couple tied the knot in Hawaii, surrounded by family and friends.

Patrick gifted his longtime girlfriend a huge emerald-cut rectangular engagement ring that could be as large as 10 carats, as PageSix reported.

The ring also “appears to feature an estimated 8- to 10-carat emerald-cut diamond, set on a white gold or platinum diamond-adorned double band,” according to Brilliant Earth‘s SVP of merchandising and retail expansion, Kathryn Money.

Mahomes proposed to Murphy on September 1, 2020. They announced their engagement on Instagram after he popped the question at the Chief’s football arena.

Brittany shared snippets of the proposal on her Instagram and posted pics of a white flower-covered room where her beau popped the question.

How many kids does Patrick Mahomes have?

Patrick and Brittany took to Instagram to announce the birth of their first baby on February 20, 2021. “Sterling Skye Mahomes, 02/20/21,” Mahomes wrote on Instagram alongside a heart, with a close-up picture of Matthews holding their daughter.

The couple announced Brittany’s pregnancy with a sweet snap of a sonogram in early 2020.

Their 20-month-old daughter, Sterling Skye, is the pair’s first child together

Nearly a year and a half later, the pair shared they were getting ready to welcome their second child – and this time – a baby boy. Brittany took to Instagram, once again, to share a video of the gender reveals on June 26, 2022. Patrick jumped into his pool to celebrate the happy news.

Patrick Mahomes and Brittany Mahomes are now parents of two!

The couple announced the arrival of their second baby together by revealing the name of their son via a joint Instagram post on Monday, November 28, 2022.

Alongside a photo of the infant’s legs in a brown and white onesie, the Kansas City Chiefs quarterback and his wife simply wrote in the caption, “Patrick ‘Bronze’ Lavon Mahomes III 🤴🏽11/28/22 7lbs 8oz 🤍.”

A silver chain with the name “Bronze” engraved in the middle can be seen in the photo on top of a blanket that reads, “Mahomes.”