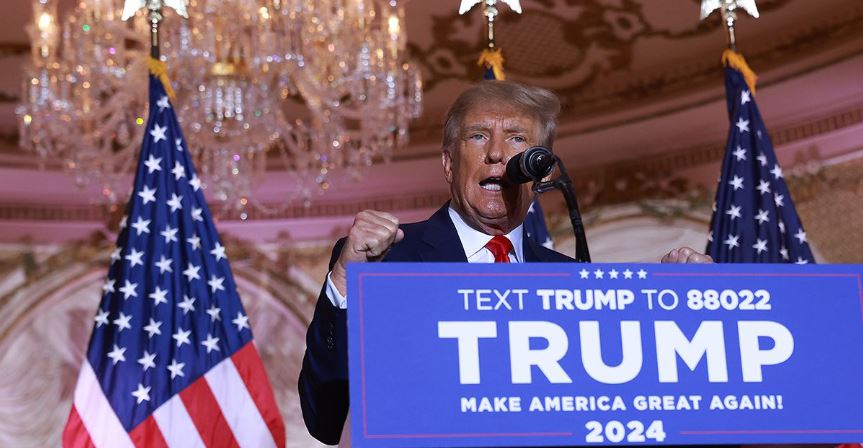 MAGA may be dead, but MAGAGA is alive, well, and taking over the internet – turning into a meme.

Even if you barely know anything about politics, you likely know that MAGA stands for Make America Great Again and was the slogan for Donald Trump‘s 2016 campaign for president. Now, following the news that Donald Trump is running for president yet again, he’s also debuted a slightly modified version of that slogan. That new extended slogan is taking over the internet, and not necessarily in the way, he might have hoped.

What does MAGAGA stand for?

In a speech delivered on Nov. 15 in which he announced that he was again running for president, Donald Trump offered a slightly updated version of his 2016 slogan.

“In order to make America great and glorious again I’m announcing my candidacy for president of the United States,” Trump said during the speech. It’s worth noting, however, that he was speaking in front of a sign that said “Make American Great Again,” which may mean he isn’t actually changing his slogan to add “and glorious.”

Folks on the internet weren’t going to let that little detail stop them, though, and began to wonder whether Trump’s new slogan would shorten to MAGAGA. Naturally, many of them then described feeling like that acronym sounded like the noises of a baby, and a number of pretty wonderful memes were born.

For the most part, these memes emphasized the idea that a slogan like MAGAGA was fitting for a group of people who some on the left described as a “bunch of babies.”

“Going forward I will only refer to Marjorie Taylor Greene as ‘Lady MAGAGA,'” one person wrote on Twitter.

“MAGAGA? For f–king real? At least this way everyone can just buy a ‘G’ and an ‘A’ iron-on letters at Hobby Lobby and stick them on their idiot hats,” another person added.

Donald Trump may once again be the frontrunner for the Republican nomination.

Although his 2020 presidential campaign did not end in victory (in spite of what he claims), Trump’s announcement that he’s running again likely positions him at the front of the Republican pack in 2024. He may face some challenges from others within the party, but Trump has managed to maintain a strong hold on his base in spite of his often erratic and often offensive behavior.

His 2024 announcement did not draw the same type of media attention that he has often commanded in the past, but that doesn’t necessarily mean that he won’t be a commanding force in the years to come. Trump is likely to face challenges from other wings of the Republican party, but it’s unclear whether those challenges will be successful enough to push Trump away from the central role he has played in Republican politics since he won the nomination in 2016.

Plenty of MAGA — or MAGAGA — Republicans are likely to remain behind him. He may not seem like the undeniable winner that he once was, but it would be unwise to count Donald Trump out. That’s how he won the first time around.