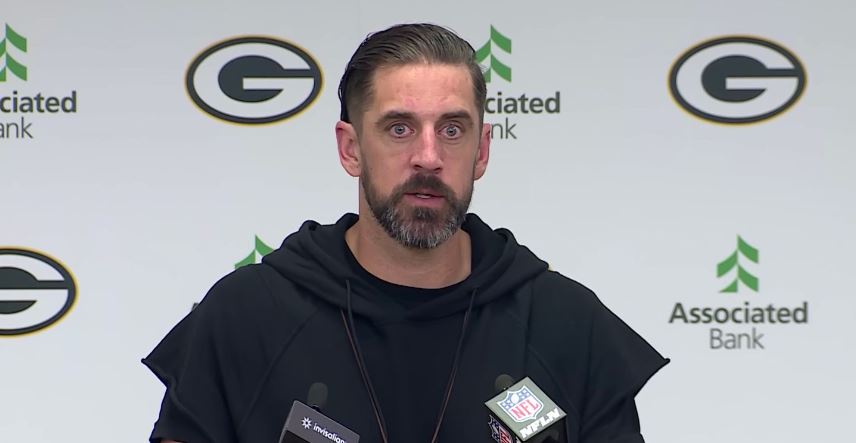 For the past year and a half, Green Bay Packers quarterback Aaron Rodgers has been at the center of several social media roasts. Following the team’s 2022 playoff loss to the San Francisco 49ers, many targeted the four-time NFL MVP with comments on his performance and teased him over his controversial remarks about the COVID-19 vaccine.

In July 2022, the 38-year-old Cali native debuted his first tattoo, and yet again, Twitter came through with a good ol’ fashioned roast. Luckily, Aaron hasn’t found himself a trending topic as of late … until now. During the fourth week of the 2022 season, the 10-time Pro Bowler showed off a new hairstyle that we can only describe as utterly tragic.

So, what happened to Aaron Rodgers‘s hair? Let’s find out.

What happened to Aaron Rodgers’s hair?

Despite playing well in the Packers’ overtime victory against the New England Patriots, fans couldn’t get over the fact that Aaron Rodgers had a bad hair day. When the star quarterback first took off his helmet, viewers noticed his strange hairdo; it appeared that Aaron shaved his head but kept two strands of hair behind his ears.

Who thought that was a good idea?!

As expected, hundreds of NFL fans poked fun at Aaron’s hair on social media while simultaneously questioning his unorthodox decision. “What the HELL is going on with Aaron Rodgers’s hair?” one person asked on Twitter. Another added that they saw “someone say Aaron Rodgers’s hair looks like a Rockhopper penguin and I cannot unsee.”

“Aaron Rodgers is on those psychedelics, right?” tweeted Reggie Wilson, the sports director for KARE 11 News. “Because that’s the only thing that makes his hair make sense. Like, what is that? What was he going for?” A fourth Twitter user went as far as to claim that Aaron’s “hair from the back gives me anxiety, and I can’t explain why.”

Honestly, we can relate to that — it just doesn’t make sense.

Aaron Rodgers recently explained the reason for his new haircut.

On Sept. 10, the Packers’ official Twitter account offered fans their first look at Aaron’s new hair. Green Bay fans were obviously thrilled that the man bun was gone and even likened his latest do to Tommy Shelby from Peaky Blinders.

Although he didn’t immediately address his haircut, Aaron returned to The Pat McAfee Show and finally explained his appearance change three days after the Packers’ social media post.

“I think when I saw my picture from the NFL Honors, I said, ‘Oof. Might be time,'” Aaron told the titular host and A.J. Hawk. “So after all I did all my hippy s–t, at some point [I said] ‘I’m gonna cut this.’ It just finally came to be last Friday.”