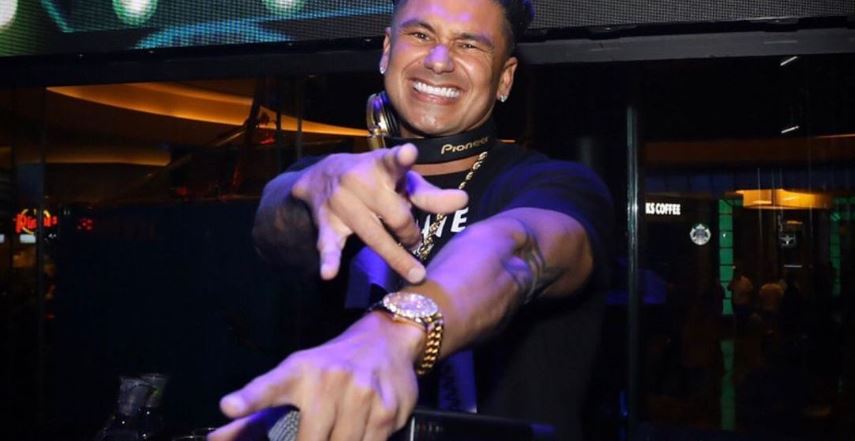 Jersey Shore’s DJ Pauly D has been a part of the MTV family since 2009. That’s 13 years of watching him fist bump, “GTL,” and date many different women. Naturally, we had to compile a list of Pauly D’s girlfriends from over the years.

From co-stars on Jersey Shore to many different women on Double Shot at Love to his very public relationship with Danity Kane singer Aubrey O’Day, Pauly has a long dating history. While some of his girlfriends are well-known, there are also some women on the list who are pretty surprising. But has Pauly finally found the one?

Keep reading for a look at who he’s dated in the past and the one who has finally captured his heart.

Pauly D dated a few of his ‘Jersey Shore’ castmates.

In the very first season of Jersey Shore, Pauly and co-star Jenni “J Woww” Farley had a brief fling. Though their fling in 2009 was brief, the two attempted to reconnect on their spinoff show, Jersey Shore: Family Vacation.

According to The Daily Mail, the two of them had flirted up a storm at Angelina Pivarnick’s bachelorette party in New Orleans, with Pauly telling everyone he wanted to sleep with Jenni. While everyone in the cast wanted the hook-up to happen, including Jenni herself, as the day approached, Pauly grew cold.

“I need to go the f–k home, and cry myself to sleep over this,” she told the cameras, getting up and leaving the room. The two have remained friends despite their multiple “will they, won’t they?” moments.

While the couple dated on and off for two years, after they officially split, Aubrey revealed that dating Pauly was “torture.” Aubrey made the revelation while talking about joining Season 3 of Ex on the Beach.

“Head back to the network that birthed me [MTV] for my new show [Ex On The Beach] .. this show was a departure from my music routine & it brought me back to life,” O’Day wrote on Instagram, “After my last relationship with Pauly, it took so long for me to heal from the pain, anger, torture, & toxicity that I found love in with him. I’m so happy for you guys to watch the journey of an ‘older gal’ find her younger self and maybe some new d–k too.”

Pauly D had a baby with Amanda Markert.

While the two didn’t actually have a romantic relationship, they did, however, have a child together. Amabella was born in 2013. Things between the two were pretty rocky, including Pauly accusing Amanda of using their daughter to gain fame. The two fought for sole custody of Amabella, but they eventually worked things out, and today they are co-parenting Amabella.

“Dad mode calms me down. So I’m not traveling when I’m home, so it gives me a chance to be home,” Pauly told Us Weekly in September 2018. “My mother comes too, so I get to see my mother and my baby. It’s dope, it’s almost like it keeps you humble.”

Pauly found love on ‘Double Shot at Love’ — is he still with Nikki Hall?

MTV decided to help Pauly try to find love with the show Double Shot at Love with DJ Pauly D & Vinny. Throughout Season 1, Pauly and Vinny Guadagnino dated 20 women, but in the end, they failed to find lasting love with any of them. But it turns out Pauly got really lucky on Season 2.

The DJ met Nikki Hall while on the show, and while they didn’t leave the show together, he reportedly still had feelings for her and pursued a relationship with her following the season finale.

Now, Nikki is as much a part of Jersey Shore: Family Vacation as anyone else. And, despite some friction with co-star Angelina in Season 6, Nikki appears to be here for the long haul with Pauly. Until the couple says otherwise, we’re inclined to trust that they really found love on an MTV reality show.

“You could just tell the way that she is with Pauly — like, this is the one, probably,” Mike “The Situation” Sorrentino said. “Quite possibly, Nikki and Pauly could be the next Jersey Shore family wedding.”