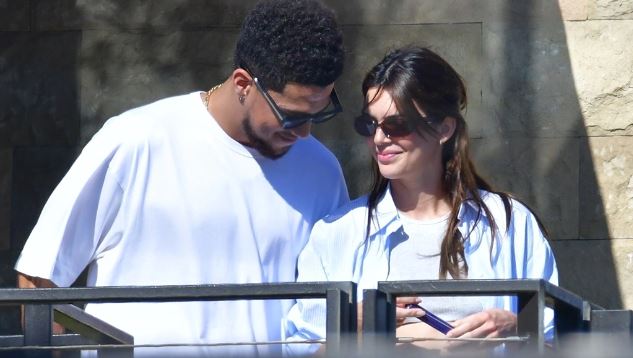 Days after Kendall Jenner and Devin Booker called it quits, the pair was all smiles as they were spotted together at SoHo House in Malibu on June 26. See the former couple spending time together below.

Kendall Jenner may have put Devin Booker back in the game.

On June 26, the 26-year-old and Phoenix Suns player, 25, were spotted spending time together at the SoHo House in Malibu, Calif., just days after news of their split surfaced. In the photos, Kendall and Devin were all smiles as they cozied up next to each other outside at the private membership club.

An eyewitness told E! News that the pair looked happy and “had great energy between them” during the outing. At one point, the insider noted, Kendall giggled after Devin whispered something in her ear.

“They shared things on their phones and laughed,” the eyewitness said. “Kendall was looking up and smiling at Devin.”

Their reunion comes nearly a week after a separate source told E! News that the two had called it quits, saying that Kendall and the NBA star faced a challenging time in their relationship in the weeks after attending Kourtney Kardashian and Travis Barker‘s Italian wedding together.

“They had a really nice time in Italy together,” the second insider explained. “But once they got back, they started to feel like they weren’t aligned and realized they have very different lifestyles. Kendall told Devin she wanted space and time apart.”

Though Kendall and Devin—who officially began dating in June 2020—had split, the source told E! News that they were remaining amicable, saying, “They have been in touch since and do care about one another. They both hope to make it work but, as of now, they are split.”

Keep scrolling to see pics of Kendall and Devin reuniting after their breakup.