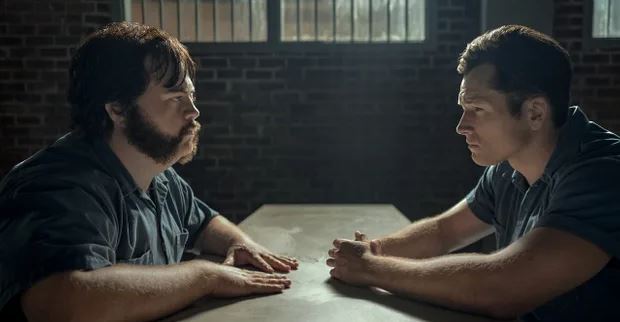 Meet the Black Bird actors who take on the roles of real-life criminals and cops in this gritty and unsettling true story of the criminally insane.

The Apple TV+ series Black Bird premiered in July, with true-crime fans on the edge of their seats, impatiently waiting to see the Jimmy Keene story play out. Based on true events, this gritty, dark tale is told from inside a prison for the criminally insane where one of the Midwest’s most prolific killers is kept, along with his new, curious friend.

Once a high school football star with his whole life ahead of him, Jimmy Keene finds himself swept up in a drug ring, lured in by the money and glamour of life in the mob. After building up a case, the wealthy young man finds himself locked up with a minimum of ten years as his sentence. The son of an honored police chief, Keene looks for a way out of his long punishment and is given a dangerous opportunity. In exchange for his freedom, he is transferred to a maximum-security prison for the criminally insane to befriend a suspected serial killer and find out the location of his victims’ bodies.

This tale of the man who went undercover for the FBI to gain his freedom and the relationship he builds with a crazed and creepy murderer along the way is full of dark and terrifying twists and turns. We’ve gathered all the evidence as to who is who in this true story of the Larry Hall murders and the confessions Jimmy Keene obtained while locked in with the devil.

Jimmy Keene agrees to be transferred to a maximum-security prison for the criminally insane. This will allow him to make friends with Larry Hall, a suspected serial murderer. Keene’s task is to get a confession from Hall in order to end his appeal and locate the hidden bodies of up to 18 women. Is Hall a serial murderer? Or are you a regular confessor?

It’s definitely a terrifying story, but is it true and who are the characters and actors? Here’s what we know about Black Bird.

Is Apple TV Plus’s ‘Black Bird’ based on a true story?

Black Bird is based on the book I’m With the Devil: A Fallen Hero, A Serial Killer, and A Dangerous Bargain for Redemption by James Keene. Yes, it’s the same James Keene. The series is absolutely based on this book, which is a true story. It’s easy to see why people would question its validity because this tale is stranger than fiction.

The book, which was released in 2010, follows Jimmy Keene as he goes from golden boy to gangster. According to Bustle, he “led his Kankakee Eastridge High School football team in the early ’90s.” He was a star athlete and by all accounts, someone who not only walked but practically ran the straight and narrow. Unfortunately, it wasn’t enough to get Jimmy to college, so he majored in drug dealing instead — a path that served him well.

In 1996, Jimmy was arrested and was slapped with a 10-year prison sentence for his participation in a large-scale drug operation. On his website, Jimmy reveals his exact reaction to being held at the Ford County Jail. “I’d rather be in a hardcore prison and have to worry about getting stabbed,” he wrote, “than be confined in that little, nasty ancient history s–t hole.”

Fortunately (or unfortunately) for Jimmy, he was not long for this particular environment. The FBI came to a calling with an offer he couldn’t refuse.

What did the FBI want with Jimmy Keene?

Special Agent Ken Temples, who Jimmy describes as benign and balding, had a get-out-of-jail-almost-free card. He handed Jimmy a thick file filled with horrifyingly graphic photos of dead women, which was something he wasn’t used to seeing. The last photo was of a smiling man, sporting huge mutton chops. Assistant U.S. Attorney Larry Beaumont, also present at the meeting, pointed to the picture of the man and explained that he had abducted a girl from a cornfield and was currently serving a life sentence.

“We think he’s responsible for more than 20 other killings,” added Larry Beaumont. The terrifying man with the baby face hidden behind a wreath of facial hair was Larry DeWayne Hall. The FBI wanted Jimmy to transfer to the maximum-security penitentiary and psychiatric hospital in Springfield, Mo. where Larry was being held in the hopes that Jimmy could befriend him. The goal was to extract confessions from Larry as well as the locations where he hid the bodies of his victims. If Jimmy could do that, he would walk free.

Black Bird is the story of two men, both criminals. One is offered the road of redemption while the other is far too deep in darkness to ever come back. And while Jimmy is given the option of physically freeing himself from torment, Larry DeWayne Hall is only able to unburden his soul.

The cast of Black Birds

Meet the cast of Black Bird

Jimmy was a star football player at Kankakee Eastridge High School, with plenty of friends and a promising future ahead of him. Unfortunately, it wasn’t enough for him to get picked up by a major college, and the once-promising football star became a prolific drug dealer instead. In 1996, Keene was arrested on drug charges and sentenced to ten years to life. The son of a decorated police chief, Jimmy tried to find a way out of his long sentence.

Keene was given two options: either stay in the minimum security prison and do his allotted time or be transferred to a maximum-security prison for the criminally insane to go undercover for the FBI. Once in the dilapidated prison, Keene is instructed to elicit a confession from suspected serial killer Larry Hall, and help them find the location of his victims’ bodies. If Keene can get the information they need to convict Hall, he’ll be granted his freedom. Keene, eager to shorten his long sentence, took the job, though nothing could prepare him for what he had to endure.

Taron Egerton will be taking on the role of the mob-corrupted man who must earn his freedom from behind bars. Egerton is known for his role as Eggsy in the Kingsman film franchise, as well as taking on the starring biopic roles of Elton John in Rocketman and Eddie Edwards in Eddie the Eagle. In 2018, the Kingsman star won the CinemaCon award for Action Star of the Year. His fight choreography and experience in action roles will likely come into play as he takes on the character of Keene, who encountered violence from his fellow inmates while behind bars.

Larry Hall is suspected of killing 40 women, though, in Black Bird, investigators have only found the body of one thus far. Hall insists that he’s not a killer, but that he has dreams in which he kills women. Though the suspected murderer insists that they are just dreams, the investigators fear that if he isn’t convicted of his crimes, he will leave prison and continue to kill. Hall, a war reenactment fanatic, had a long history of stalking young girls, often teenagers, in his tan van, where police found ropes, knives, chemicals, and masks prior to his arrest.

Paul Walter Hauser is an accomplished actor who has taken on diverse roles in both television and film. He is recognizable as his character Horace in the 2021 Disney film Cruella, in which he portrays the oafish criminal sidekick of the fashionable antihero. Though often portraying characters he himself considers doofuses in comedies, such as Super Troopers 2 and Reno 911!, Hauser is no novice when it comes to serious roles.

In 2017, Hauser portrayed Shawn Eckhardt in the drama film I, Tonya. As the ice skater’s bodyguard, Hauser perfectly emulated his real-life counterpart, who played a large role in the attack on figure skater Nancy Kerrigan. Hauser has stated that he was wary of taking on the role of Larry Hall, finding himself growing more uncomfortable with true crime as he ages.

Though, the BlacKkKlansman actor feels that the Black Bird story is more about the relationship between Hall and Keene, rather than being a gross-out gory horror series. Hauser currently has two more upcoming projects in post-production, Delia’s Gone and National Anthem, both said to be violent thrillers. Hauser underwent quite the transformation to take on the role of Larry Hall, including losing 40lbs and changing the pitch of his voice to be much higher. Additionally, the Cobra Kai actor utilized prosthetics to give him Hall’s distinctive muttonchop sideburns.

Brian Miller was the chief investigator of Vermillion County Sheriff’s Office, where he led the investigation on suspected killer Larry Hall. Miller investigates how the suspect’s war reenactment involvement may link him to the site of the murders, and looks into reports from young girls who were followed and stalked by Hall in his tan van.

Greg Kinnear, who will be portraying the unshakable sheriff, got his start in acting at the age of 25, appearing in TV movies and taking on small roles. The talented actor worked his way up to starring roles in such films as As Good as it Gets, You’ve Got Mail, and The Last Song. Kinnear is recognizable for some of his hilarious comedy roles, including hopeful actor Walt in the 2003 film Stuck on You, and aspiring motivational speaker Richard Hoover in the Abigail Breslin starring comedy Little Miss Sunshine.

Kinnear recently appeared in the Courteney Cox-led comedy-horror series, Shining Vale, where he took on the role of Terry Phelps, a hard-working husband, and father whose attractive young secretary is looking to get him in trouble. The Sabrina actor is currently working on a comedy film titled The Present, in which a brilliant boy learns that he can manipulate time, and attempts to change the outcome of his parent’s separation.

Lauren McCauley was one of the FBI agents tasked with investigating the Hall murders. She entrusts Keene with getting the confession she needs to keep the killer behind bars.

Sepideh Moafi, the actress portraying the FBI handler, is known for her role as Loretta in the drama series The Deuce, in which the actress explores the real-life struggles of Manhattan sex workers in the 1980s. More recently, she portrayed the character Gigi Ghorbani in The L Word: Generation Q.

Moafi’s character there is an ill-tempered single mother who is attempting to co-parent alongside her ex-wife Nat. The German-born actress currently has an action project in the works. The film Mother, which is still in pre-production, will star Moafi in the true story of a Syrian woman fighting to protect her family from war.

Jim wanted a better life for his son, with a regular job and a family. Instead, the honored police chief talks to his would-be-mobster son through the glass of a prison visitation window.

Ray Liotta takes on the role of the disappointed father who does what he can with his personal connections to get his son out from behind bars. The beloved actor passed away in 2022 while filming Dangerous Waters, an upcoming thriller starring Lady Bird actress Odeya Rush. Known for his breakout role in the Martin Scorsese film Goodfellas, 67-year-old Liotta will be cherished for his tough, smoldering characters and unmatched charm. Black Bird will be the first of Liotta’s projects released following his death. A prolific actor, audiences will get to see Liotta in the upcoming films El Tonto, Cocaine Bear, Dangerous Waters, April 29, 1992, and The Substance.

The first two episodes of Black Bird are available to stream on Apple TV Plus, Friday, July 8. New episodes will then be released each Friday until the sixth and final episode on August 5.