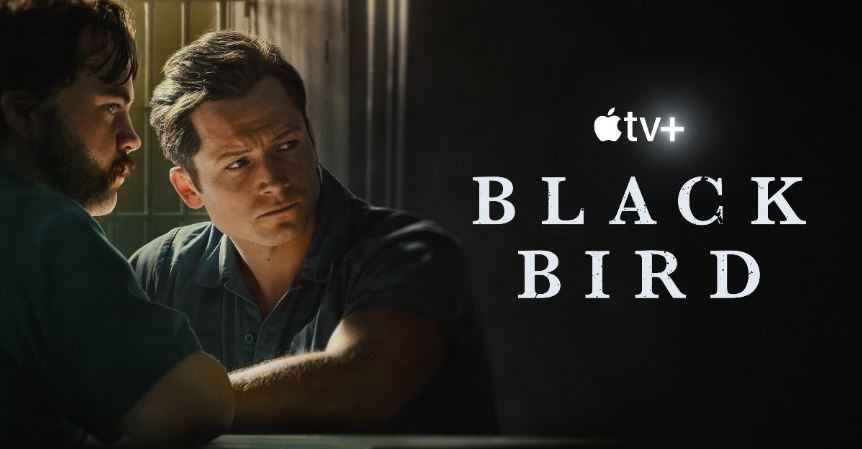 Is Black Bird a true story and what is the Apple Tv Plus’s drama series about? Read on for more.

Watching Colin Firth step into the shoes of Michael Peterson for HBO Max’s fictionalized version of The Staircase was truly thrilling. If you closed your eyes while Colin was speaking, you’d swear you were watching the original documentary the series was based on.

Taron, who folks will remember fondly as Elton John in the Rocketman biopic about his life, is opting for a darker role this time. In the Apple TV Plus series Black Bird, Taron plays James “Jimmy” Keene, a man sent to prison for dealing drugs. While there, Jimmy is given the opportunity to walk free if he can convince an accused serial killer to confess his crimes and admit where he hid the bodies.

It’s definitely a terrifying story, but is it true? Here’s what we know about Black Bird.

Is Apple TV Plus’s ‘Black Bird’ based on a true story?

Black Bird is based on the book I’m With the Devil: A Fallen Hero, A Serial Killer, and A Dangerous Bargain for Redemption by James Keene. Yes, it’s the same James Keene. The series is absolutely based on this book, which is a true story. It’s easy to see why people would question its validity because this tale is stranger than fiction.

The book, which was released in 2010, follows Jimmy Keene as he goes from golden boy to gangster. According to Bustle, he “led his Kankakee Eastridge High School football team in the early ’90s.” He was a star athlete and by all accounts, someone who not only walked but practically ran the straight and narrow. Unfortunately, it wasn’t enough to get Jimmy to college, so he majored in drug dealing instead — a path that served him well.

In 1996, Jimmy was arrested and was slapped with a 10-year prison sentence for his participation in a large-scale drug operation. On his website, Jimmy reveals his exact reaction to being held at the Ford County Jail. “I’d rather be in a hardcore prison and have to worry about getting stabbed,” he wrote, “than be confined in that little, nasty ancient history s–t hole.”

Fortunately (or unfortunately) for Jimmy, he was not long for this particular environment. The FBI came to a calling with an offer he couldn’t refuse.

What did the FBI want with Jimmy Keene?

Special Agent Ken Temples, who Jimmy describes as benign and balding, had a get-out-of-jail-almost-free card. He handed Jimmy a thick file filled with horrifyingly graphic photos of dead women, which was something he wasn’t used to seeing. The last photo was of a smiling man, sporting huge mutton chops. Assistant U.S. Attorney Larry Beaumont, also present at the meeting, pointed to the picture of the man and explained that he had abducted a girl from a cornfield and was currently serving a life sentence.

“We think he’s responsible for more than 20 other killings,” added Larry Beaumont. The terrifying man with the baby face hidden behind a wreath of facial hair was Larry DeWayne Hall. The FBI wanted Jimmy to transfer to the maximum-security penitentiary and psychiatric hospital in Springfield, Mo. where Larry was being held in the hopes that Jimmy could befriend him. The goal was to extract confessions from Larry as well as the locations where he hid the bodies of his victims. If Jimmy could do that, he would walk free.

Black Bird is the story of two men, both criminals. One is offered the road of redemption while the other is far too deep in darkness to ever come back. And while Jimmy is given the option of physically freeing himself from torment, Larry DeWayne Hall is only able to unburden his soul.

The first two episodes of Black Bird are available to stream on Apple TV Plus, Friday, July 8. New episodes will then be released each Friday until the sixth and final episode on August 5.