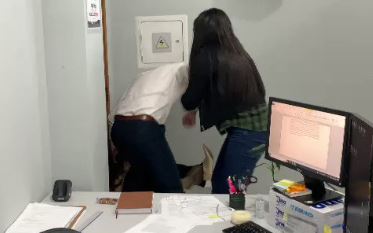 The attorney general of the Paulista municipality of Registro, Gabriela Samadello Monteiro de Barros gets beaten up by her colleague named Demetrius Oliveira Macedo.

A video of the sad incident which reportedly took place inside the town hall where she works has gained traction on the internet.

In the video, Gabriela Samadello’s face was left with blood after the assault, which was filmed by another employee.

The man unleashed punches and kicks against the prosecutor.

According to G1, the assault took place in the afternoon of last Monday, 20, and was reportedly motivated by the opening of an administrative lawsuit against the man because of his stance in the work environment.

An incident report (BO) about the case was registered in the 1st Police District (DP) of the municipality, according to the report.