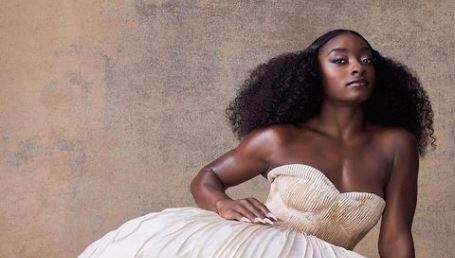 Flight attendant mistakes Simone Biles as a child and offers her a coloring book on her flight home after accepting the Presidential Medal Of Freedom — Ya Know, Keepin’ Her Humble.

She’s currently tied with Shannon Miller as the most decorated American gymnast in history, and the 25-year-old boasts an inspiring 25 World Championship medals.

She was even recently awarded the Presidential Medal of Freedom by Joe Biden.

She is beauty, she is grace, and she also just so happens to be 4 feet 8 inches tall.

Recently, while appearing to be on a flight home from receiving her Medal of Freedom, Biles revealed on Instagram that flight attendants offered her a coloring book — which, ya know, are usually reserved for children.

“Not the flight attendant trying to give me a coloring book when I board,” the Olympic gold medalist joked in reference to the situation. “I said, ‘No, I’m good. I’m 25.'”

Though Biles turned down the offer, I — and many people who came across her post — must admit that the offer sounds very tempting.

Coloring books being offered on planes feels like the perfect distraction for flight anxiety.

How old is Simone Biles now?

Simone Biles is an American artistic gymnast. Real named Simone Arianne Biles was born on March 14th of 1997 in Columbus, Ohio. She is currently 25 years old.

Simone and her three siblings were constantly in and out of foster care while she was growing up. Her grandmother started playing an active role in her upbringing in 2000, and during this period Biles grew up in the suburbs of Houston, Texas.

Raised in a Catholic home, Simone maintained strong roots in Belize while growing up, as her mother is Belizean. To this day, she holds Belizean citizenship.

How tall is Simone Biles?

At a young age, it became clear that Simone was destined for a career as a professional gymnast. She was subsequently pulled out of class and homeschooled for the rest of her secondary education.

This allowed her to train over 33% more, and before she had attended university, Simone was competing in the Olympics at the highest level.

Her seven Olympic medals tied with Shannon Miller for the most Olympic medals won by an American gymnast. She is considered one of the greatest and most dominant gymnasts of all time. In 2022, Biles was awarded the Presidential Medal of Freedom by Joe Biden.