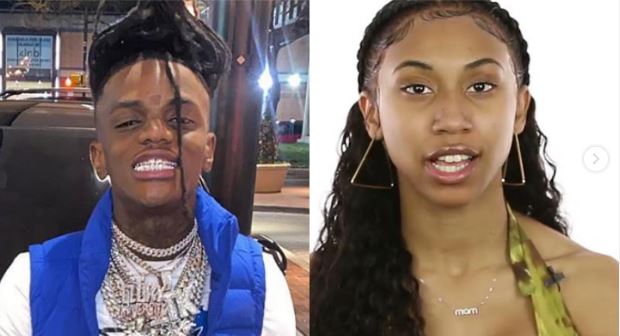 Javorius Tykies Scott, known professionally as JayDaYoungan, is an American rapper and singer. He is best known for his singles “23 Island”, “Elimination” and “Opps”, which have received 49, 27, and 26 million respective streams on SoundCloud as of November 2020.

The 23-years-old rapper from Bogalusa, Louisiana, United States, and his new model and YouTuber girlfriend Caren Vonchae took to Instagram to share sad news about their loss.

According to Carena, on Father’s Day June 10, 2022, she and her boyfriend JaydaYoungan lost their precious gift from God whom they planned to name Amazi Breeze Scott to a miscarriage.

Carena shared a picture of her holding her baby’s hand and added hurtful words as her caption. She wrote:

“Amazi Breeze Scott❤️ June 10, 2022 … it hurt me so bad to say goodbye to such a beautiful soul but you fought so long for mommy… i question why you left me but i would’ve been selfish to ask you to stay….”

“When I saw you i automatically fell in love, never felt love so strong… my heart is broken and I don’t know if I’ll ever be the same…. you taught me so much and you’ll forever be with mommy! my guardian angel 👼🏼 i miss you so much, your little kicks, seeing you every week, rubbing you, kissing you…..having to leave you at the hospital killed me,i prayed everyday for you baby, and thanked God for everyday he blessed you with!”

“God needed you up there with him… you were too good for this world full of evil & hate.. just wishing I could be with you up there…you mean the most to me my baby and I’ll do anything for you… 💔 im broken but staying strong is the only choice i have… i love you mazi”

Shortly after Jaydayoungan and his girlfriend announced she had a miscarriage, his baby mama Jordan B took to Twitter to celebrate.

Below is a screenshot of Jordan B’s reaction: