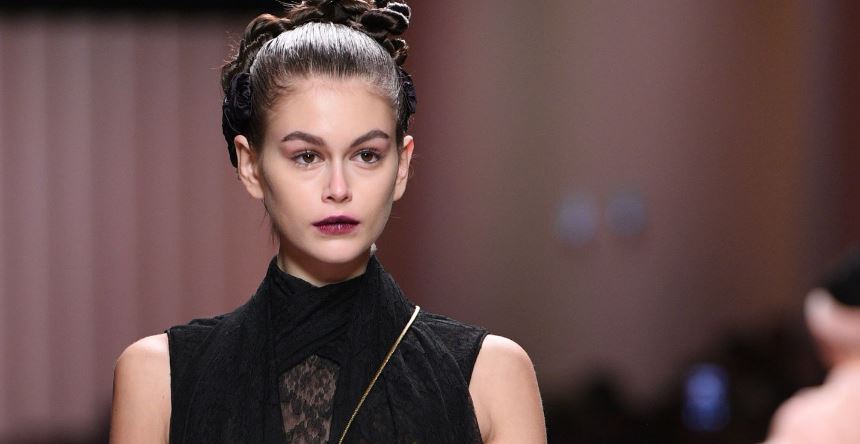 Is Kaia Gerber in a relationship currently and who has she dated in the past? The model has dated a slew of famous men.

Despite recently turning 20, Kaia Gerber has been very active in the celeb dating scene. She dated comedian and SNL cast member Pete Davidson before being spotted with Cara Delevingne, who had just been in a long-term relationship with Pretty Little Liars star Ashley Benson.

But are those the only celebs on Kaia’s radar? The model seems to have her eyes on someone else as of late. So, who is Kaia dating?

Kaia Gerber is currently dating Austin Butler. They’ve been in a relationship since December 2021.

Kaia and Austin were first spotted together about a month after her split from Jacob Elordi (we’ll get to him in a moment) in photos published by the Daily Mail. Two seconds later, a source told People that “she seems really happy, all of her friends think he’s really cute,” which, yes, accurate statement. Things got serious fast, and Kaia and Austin made their red carpet debut at the Met Gala in early May 2022:

Their most recent cuteness? This red carpet kiss at Cannes:

Jacob and Kaia were first spotted grabbing dinner in September 2020, at which point a source tried to act like they were all casual to E! News, musing, “Jacob definitely has interest in dating Kaia, but there is nothing serious going on there. They have many mutual friends and have hung out many times in the past. They both have very chill personalities and similar interests. Jacob makes Kaia laugh and her family adores him.”

Obviously, there was something serious going on there—so serious that Kaia spoke about Jacob to Vogue in May 2021, saying that “being able to be with someone I trust, where we don’t want anything from each other, having a safe, steady relationship like that has really opened my eyes to the possibilities of love and what it feels like to love without conditions. Lust is touching other people or wanting them, but love is really seeing someone.”

Despite the happy quotes, Jacob and Kaia parted ways in November 2021, when a source said, “They split, and it is amicable.”

Kaia Gerber and Cara Delevingne were snapped together looking cozy in July 2020.

Kaia Gerber, daughter of legendary supermodel Cindy Crawford, and fellow model Cara Delevingne attended a Black Lives Matter rally together that was held outside the Hall of Justice in Downtown Los Angeles in July.

The pair had been in a “quarantine crew” with some of their friends since the start of the coronavirus pandemic back in March, but since then, most of the group disbanded and spent some time apart.

The two reunited and put on a very affectionate display as they joined the protest, holding hands and embracing, with Cara wrapping her arm around Kaia’s waist. In June 2020, the duo was pictured getting hands-on at another BLM protest at Los Angeles City Hall.

Before Kaia cuddled up to Cara, she was dating Pete Davidson.

In late 2019, Kaia and Pete met at an Alexander Wang fashion show that he did a surprise appearance for. Kaia had been booked for and walked in the show.

After speculation that the two were dating due to many lunch dates and Kaia’s mysterious “P” necklace, E! News confirmed the news and wrote, “Kaia and Pete are definitely in a romantic relationship. They have been friends for a while now and run in the same friend circle but became romantic recently. They started hanging out alone more often after meeting up in NYC in October. Kaia expressed she loved Pete’s personality. She thinks he is charming and is very intrigued.”

Then the two really confirmed their relationship by making out poolside in Miami. They later broke up in January 2020 which Pete claims was due to their age gap and his struggles with mental health. Kaia is 18, and Pete is 25.

After his rumored split from Riverdale co-star Lili Reinhart, Cole was spotted out and about with Kaia. Though he denied the rumors the two were an item, he was once again spotted with the model at a Black Lives Matter protest.

After Riverdale fans started attacking Cole and Kaia, he took to his Instagram to put it all to rest. He wrote, “I tolerate a lot of rumors and slander from people online claiming to be my fans. Fans who feel entitled to my privacy precisely because I never indulge them. But attacking my friends, baseless accusations, leaking my address and sending death threats are all qualities of insanity and fanaticism.”

Nothing was ever confirmed, but Kaia and Wellington (a fellow model with an amazing name) were photographed holding hands. So guess they dated? Or they were just friends who occasionally got affectionate, either way!

Anyway, we’ll be updating this list if anything should change with Kaia and Austin’s relationship status (hopefully not, they’re cute), so stay tuned.