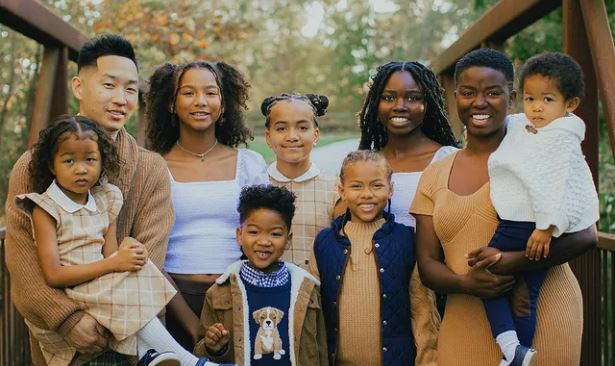 MazeLee is still a married YouTube interracial couple. How did they meet, what do they do for a living, and more explained!

Alena Maze is a living example of a person who breaks stereotypes, racism, and cultural differences.

She is also a wonderful mother who beautifully balances work and home. Her husband Joe and her kids are very supportive and loving which makes the Mazelee family one of a kind.

Both Joe and Alena have attended a number of interviews spreading positivity and faith in God. They have interacted with Chirp Radio, Beyond Black, PopSugar, and White just to mention a few. Their talks on embracing cultural differences are highly applauded.

Every new fan of the couple is eager to know the number of kids the power couple have together with their kids’ names and ages and already obsessed fans keep asking themselves if they’ve welcomed a new baby into their family. So, how many kids does the Mazelee family have now and how did Alena and Joe even meet?

Who is Alena Maze?

Dr. Alena Maze is an African American who is a mathematician just like her parents. She was born and brought up in the US.

Her ethnicity is from Africa and she faced a number of challenges in her childhood. Racism is something that was very common throughout her life.

They spoke extensively about the purpose of life and how God has gifted it to them.

In May 2021, she became the first-ever African American to complete a Ph.D. in Survey Methodology and earned a doctorate.

“What’s a Survey Methodologist? Well, I’m a Survey Statistician, so specifically, I research the math behind surveys,” she said. “Suppose we want more information on how diabetes affects women ages 30-40, in order to develop better treatment courses. Well in a perfect world, we would like to send out a survey (i.e., a series of questions) to all women ages 30-40 with diabetes. However, this is not practical for many reasons. So instead we chose a smaller group (called a sample), say 2,000 women from that same population to represent the whole population of 30-40-year-old women with diabetes.”

Alena Maze is also a data analyst who owns a YouTube channel along with her husband Joe Lee. She is a mother to seven children and together they share various ideologies on racism and culture.

Alena Maze shares things about her work life and her life as a mother/wife. This includes videos that focus on budgeting for a homemaker, skincare tips, and maintenance of the home.

It’s no question that Maze will continue to be successful in all she does.

How did Alena Maze and Joe Lee meet?

Alena Maze is, quite literally, a superwoman — seemingly capable of doing it all.

According to her remarkable story on PopSugar, the wife and mother fell in love with her husband, Joe Lee, when she was 13 years old. But time and chance made them lose touch. They reconnected again when they were a little older, but it took a second time of losing touch before they realized what they meant to one another. Finally, on their third serendipitous encounter, they gave their relationship another try.

Today, Maze and Joe Lee are married and have seven children in a blended family. But, she said, she wouldn’t have wanted it any other way.

“Growing up, my mother helped to raise many children in the foster care system,” she said to PopSugar. “I always loved having lots of children around and knew I wanted to have many children of my own. My favorite part of being a mom is being able to live in the footsteps of my mother and my grandmother. I feel proud to have been handed down this motherhood title. I’m learning a lot from my own children and growing myself with the challenges and victories of motherhood.”

Alena Maze and Joe Lee are a popular YouTube couple who bring high-quality family-oriented multicultural media to their over 2 million subscribers’ Youtube channel. They document their journey to find their purpose in the will of God. While revealing the dynamics of a multicultural blended family and a Black and Korean relationship, the couple transparently expresses their struggles and successes through cinevlogs (cinematic vlogs).

Who is Joe Lee?

Joe Lee is a Korean-American Youtuber and the Patriarch of the MazeLee Channel. He has also worked as a director of photography, street photographer, and photojournalist for various cinematic vlogs.

Initially, the YouTube channel belonged to his wife, Alena Maze. It debuted in 2009. He joined the team in 2015 or so. Joe’s YouTube channel was a Shorty Award finalist in the category of family/parenting.

Joe is well-known not only on YouTube but also on social media. On Instagram, he has over 150K followers under the handle “streetevoker.”

How many kids does Mazelee have?

Alena Maze and Joe Lee are parents of 8 kids with the gender of their last child who was born on September 30th, 2022, revealed as a male. She became a mother of three children from her previous relationship while living in the Washington D.C. area. and then married Joe Lee, a Korean photojournalist.

They saw cultural differences as an opportunity to grow and created a youtube channel, Mazelee in 2009. Alena had four more kids with Lee and most of their everyday videos featured their children.

The names of her seven children are Amyah, Akyli, Azaio, Arazo, Ajedi, Ajoui, and Baby they document their journey to find their purpose in the will of God. The name of their 8th son is yet to be revealed.

Amyah and Akyli, the oldest of the couple’s kids are in high school.

Alena’s YouTube channel and Instagram handles give a glimpse of her life as a mother of seven and how she balances her work life.