Pete Davido biography: All about the American comedian and film producer that every fan should know.

Pete Davidson (real name, Peter Michael Davidson) is an American comedian, actor, film producer, and screenwriter. He has been a cast member on the NBC late-night sketch comedy Saturday Night Live (SNL) since September 2014. Davidson has also appeared on the MTV shows Guy Code, Wild ‘n Out, and Failosophy.

He was raised on Staten Island, New York, and is the son of Amy (Waters) and Scott Matthew Davidson. Pete’s father, a firefighter, died during the 9/11 attacks.

In June 2018, he got engaged to Ariana Grande, but the couple separated in October 2018. He has also dated Kate Beckinsale, Carly Aquilino, and Cazzie David. In 2021, he was in a five-month relationship with actress Phoebe Dynevor. He started dating Kim Kardashian in November 2021.

Pete Davidson has a net worth of $8 million. Pete Davidson is best known for being a featured comedian on “Saturday Night Live” and was the youngest cast member in the 40th season. He is also famous for dating many famous women, notably Ariana Grande.

#2. He is the son of Amy and Scott Matthew Davidson.

#3. He has a younger sister named Casey.

#4. His father was of mostly Jewish heritage and his mother is of Irish descent.

#5. Named his comedy special “SMD” because it was his father’s initials, but also because it has an obscene meaning.

#8. Tragically, his father died when Pete was seven years old on 9/11 during the September 11, 2001, terrorist attacks as a firefighter.

#9. His father was serving as an NYC firefighter and was last seen running into the Marriott Trade Center just before it collapsed.

#10. The loss was profoundly traumatic for Pete, who later exhibited his grief by acting out in school.

#11. He often found himself in trouble. He later revealed that he struggled with suicidal thoughts and the music of Kid Cudi saved his life.

#12. Pete graduated from Xaverian High School in 2012 and enrolled at St. Francis College, but dropped out after one semester to pursue comedy.

#15. His earliest onscreen appearance was in Failosophy, an MTV comedy series.

#16. After that, he appeared on different reality programs until he got his first televised standup aired on Gotham Comedy Live, a comedy central program that showcases up and coming comedians.

#17. He subsequently made other standup appearances and had a brief stint on “Brooklyn Nine-Nine” before landing a spot on “Saturday Night Live” as a cast member.

#18. He had been given the chance to audition through his connection to Bill Hader, whom he met while filming a small role in 2015’s “Trainwreck.” 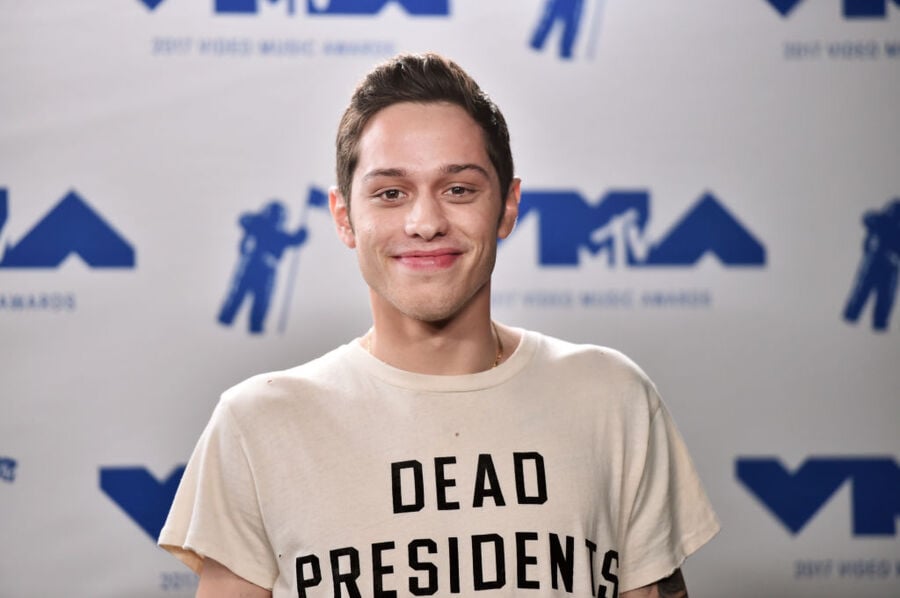 #21. His debut season’s performance garnered critical acclaim, and Davidson is often praised for being relatable to audiences and for mocking sensitive and taboo subjects, even subjects that are dangerously close to his own life and emotions, like the attacks of 9/11.

#22. When the 44th season of Saturday Night Live ended, Washington Post critics credited Davidson as SNL’s breakout star and the most memorable performer that season.

#24. In January 2019, Davidson announced he would be touring with John Mulaney for a limited series of comedy shows titled “Sundays with Pete & John.”

#33. In the short time that they’ve been together, he has gotten 4 tattoos dedicated to Ariana Grande: her initials, her bunny ear logo, an inside joke they have, and their favorite song.

#34. Davidson suffers from Chron’s disease and has said he can’t function without medical marijuana.

#35. He has been quoted as saying he would not be able to work on SNL without it, however, on March 6, 2017, he announced on Instagram that he had quit drug use and was sober for the first time in eight years.

#36. He later clarified on a podcast with Marc Maron that he still did occasionally use marijuana, although he had cut back considerably.

#37. He was a vocal advocate and fan of Hilary Clinton in her 2016 presidential campaign, even going so far as to get a tattoo of her on his leg.

#39. The New York Police Department conducted a wellness check on Davidson on December 15, 2018, after he shared an Instagram post expressing suicidal thoughts that sparked concern among his followers, friends, and former fiance Grande.

#40. He was found safe at the SNL studios, and he only appeared on the show once that night, as introducing a musical act.

#41. Yeah, look, when I’m doing stand-up and stuff, nothing I ever say is coming from a hateful place. And you can’t know what’s funny until you try it, you know?

#42. As some of you know, I was recently diagnosed with Borderline Personality Disorder, a form of depression. And depression is a disease that affects more than 16 million people in this country. And there is no like cure, per se. But like for anyone dealing with it, there are treatments that can help. First of all, if you think you’re depressed, see a doctor and talk to them about medication and also be healthy. Eating right and exercising can make a huge difference.

#43. Once we start doing our research we’re not going to have much left because it seems like all really talented people are sick. Pretending these people never existed is maybe not the solution. The rule should be…you could appreciate their work, but you only if you admit what they did.

#44. I just tell people that I’m flawed because I am, and I don’t want to pretend like I’m not. When you’re honest about it, you just feel better as a person rather than like you’re pretending to be someone else.

#45. I think if you’re able to be open, it’s really good. It’s reassuring when you hear someone that you admire talk about topics like that publicly because it’s an embarrassing thing sometimes. Crohn’s is an embarrassing disease to have so it’s not fun to talk about, but there are people out there that have it.

#46. Climate Change is no laughing matter, but I hope that through comedy we can inspire action. NRDC has been at the forefront of the fight for almost fifty years, making its mission to protect the well-being of this planet and everything in it. That’s why I am excited to be supporting NRDC and hope that you’ll do the same.

#47. The internet is evil, and I don’t like how it affects me. I don’t like how the internet is a place where anybody can s**t on you and make anything up. I’ve worked really hard to get my brain to this place. I can’t go online like everybody else because it’s just a f**k-fest. And now I get to enjoy my life.

#48. To learn how anything can just be taken away from you early gave me this sense of ‘F**k it. Whatever, dude.’ I’m able to do stand-up and f**k around because hopefully, the worst thing that has ever happened to me happened.

#49. I just want you guys to know. No matter how hard the internet or anyone tries to make me kill myself. I won’t. I’m upset to even have to say this. To all those holding me down and seeing this for what it is – I see and I love you.

#53. In December 2020 Pete bought himself a $1.2 million condo overlooking the water just a few blocks from his mother’s house.

What is Pete Davidson’s net worth and salary?

#54. Pete Davidson is an American comedian who has a net worth of $8 million, according to Celebrity Net Worth.

#55. Pete Davidson is best known for being a featured comedian on “Saturday Night Live” and was the youngest cast member in the 40th season.

#56. He is also famous for dating many famous women, notably Ariana Grande.