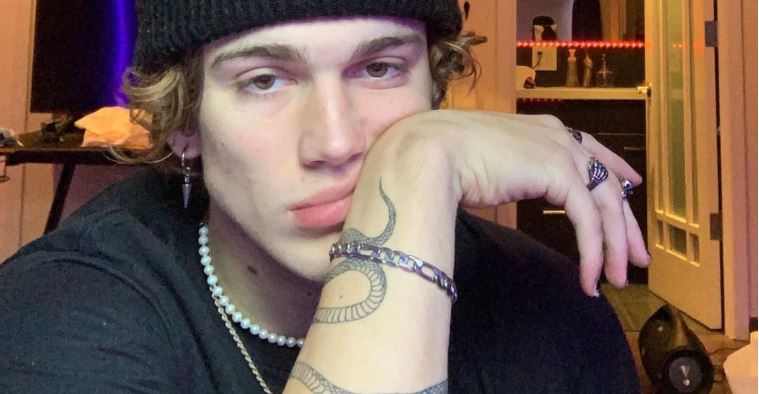 What’s it like to live in a mansion with a bunch of TikTok and YouTube stars? Ask current Hype House member and star of Netflix’s original series of the same name, Vinnie Hacker, who moved to L.A. after graduating high school and turned his hobby of making viral internet content into his career.

At just 20 years old, Vinnie, whose handle is @vhacker, has become quite the heartthrob on the platform. What has users so smitten with him? It might have something to do with his impressive tattoo collection and grizzled physique, which he doesn’t shy away from sharing.

In fact, in a recent TikTok, Vinnie is seen walking through a hallway and slowly pulling his shirt up to show off his latest ink. “Me coming back with 10 diff tattoos when I visit home,” he wrote in the caption. “This man is the definition of perfection,” wrote one user in the comments. Others inquired about how his mom reacted.

Nevertheless, it’s clear that users are hooked on Vinnie’s body markings. Here’s everything we know about his tattoo collection.@vhackerr

His tattoos are real and for now, we can say they are more than 10 but can not be specific with the exact number because he keeps on adding and removing inks on his body. These tattoos spread on his body from his arms to his chest and back.

It’s hard to go on Vinnie’s page and not take notice of his ink. His tattoos have become quite a defining trait for him and have helped boost his prominence on the platform. But as Vinnie told Inked, he didn’t get the tattoos to attract fans on TikTok.

“The funny thing is, I got these tattoos before I was big on TikTok,” Vinnie told the outlet. “A lot of people used to think I got them because people on TikTok like tattoos on guys, but I’m pretty sure that I’ve wanted them since I was, like, 14.”

The viral creator shares he got his first tattoo after turning age 18 and then just never stopped. While it’s unclear how many tattoos he has altogether, all of his ink appears to be either black or grey. Not one dab of color adorns Vinnie. His upper body is extensively decorated in ink. A spider tattoo sits in the middle of his chest. Even his hands bear some ink.

“I waited about a year after getting my first tattoo on my hands,” he told the outlet, adding “I’d honestly advise people to wait even longer because nothing’s a given.

Vinne explains that he’s not sure “how long this stuff will last” and while he’s content with his ink, he noted, “it was even a stretch for me to get them after having just my arm tattooed.”

As Hollywood Mask pointed out, some of his tattoos appear to nod to anime. On his chest, he bares the Brand of Sacrifice from the anime Berserk. On his left arm, he appears to have one of the characters from Berserk etched on.

Another notable tat includes one on his upper chest that reads “Break My Heart.” It has become so popular that fans are selling stickers that resemble the design on Redbubble.

Snakes, a skeleton jumping rope, and what looks to be a spade tattoo also embellish Vinne’s body. He shows no signs of taking a break from getting inked up anytime soon.