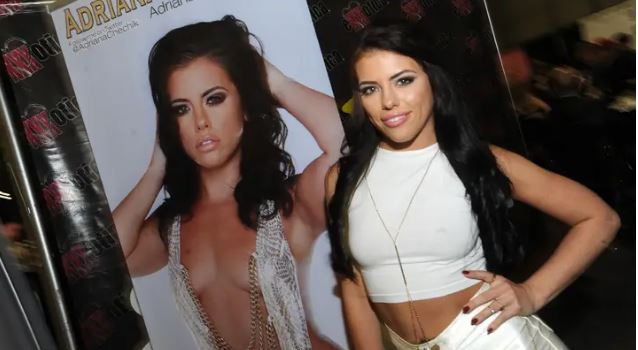 How much is Adriana Chechik’s net worth? Adult film actor, Twitch streamer, and influencer has an impressive fortune.

Our regularly scheduled Twitch drama is still going strong. TwitchCon occurred over the weekend of Oct. 7. As the name suggests, it’s an annual convention hosted by the popular livestreaming platform. The event is a celebration for streamers and grants them the opportunity to grow their individual brands. Content creators, industry professionals, and fans alike are encouraged to attend and celebrate the community.

But it seems that not even TwitchCon is immune to the recent drama.

With millions of fans of her adult films and game streaming on Twitch, how much is she worth?

What is Adriana Chechik’s net worth?

It’s reported that Adriana has a net worth of a massive $3 million per LadBible.

Adriana is very popular on social media, with an impressive 3.8 million Instagram followers where she describes herself as a lover of nature and a video game nerd.

Adriana originally started work as a stripper in Florida and took her surname after inspiration from director David Chechik.

By 2013, she decided to move on from stripping and started work in the adult film industry.

Originally a high school dropout, she returned to education to complete her GDE certification from Drexel University.

She appeared on The Howard Stern Show on August 12, 2014, and launched her own website that year.

In 2022, Adriana appeared on a podcast and opened up about growing up in foster care and talked about her regrets in her career.

She also made an announcement about her plans to leave the adult industry after nearly a decade of work.

Adriana says she wants to quit the industry despite feeling “empowered” by sex.

She had more recently been streaming video games on Twitch for fans and has built up nearly a million followers there.

She explained: “I will say Twitch has been the best blessing for me because I, for the first time in my life, was on a platform… I was just somewhere where people were valuing me for me” and confirmed she hopes to stop shooting adult films in the next 18 months.

Adriana continued: “I just have to get everyone to see me a something more first,” and revealed she has been “craving intellectuality and learning”.

She credited Twitch with giving her more confidence in herself: “The experiences and conversations on there have made me realise ‘you’re more than just how you’ve fetishised yourself,’ because I fetishised myself; it also gave me the understanding that I am more than this.

Aside from her work in the adult film industry, Adriana Chechik is best known for her Twitch channel. She’s previously streamed herself playing games like Sekiro: Shadows Die Twice and Final Fantasy VII Remake. She has also dabbled in titles like Elden Ring and Fortnite.

As a regular streamer, she was naturally in attendance at the 2022 TwitchCon event. Unfortunately, she would end the weekend in the hospital.

Adriana reportedly sustained serious injuries after jumping into a pit full of foam blocks. Video of the incident shows her leaping into the pit and landing squarely on her tailbone, likely hitting the floor at the bottom of the pit. She was unable to get up from the pit without assistance.

Adriana later tweeted on Oct. 9, confirming the nature of her injury.

She posted: “I broke my back in two places and am getting surgery to put a meter rod in for support today.”

Adriana wasn’t even the only person to have gotten hurt jumping into the foam pit. Streamer LochVaness confirmed that she dislocated her knee and sprained her ankle after falling into the pit.

LochVaness later tweeted: “I will never be able to trust Twitch at another convention in my entire life.”

According to BuzzFeed News, the pit was organized by computer manufacturer Lenovo. BuzzFeed also reports that the pit was not necessarily up to code, as the pit was less than two feet deep. Professional foam pit manufacturers even suggest that the recommended depth is between 6 to 8 feet.

A representative of Lenovo recently reached out to IGN to comment on the incidents and address those who were harmed in the foam pit.

Lenovo told IGN: “We are aware of the incidents of TwitchCon visitors who sustained injuries in the gladiator game soft foam pit at the Lenovo booth. Safety remains our top priority and we are working with event organizers to look into the incidents.”

As of this writing, Twitch has not made any statement to outlets regarding the injuries sustained at TwitchCon.