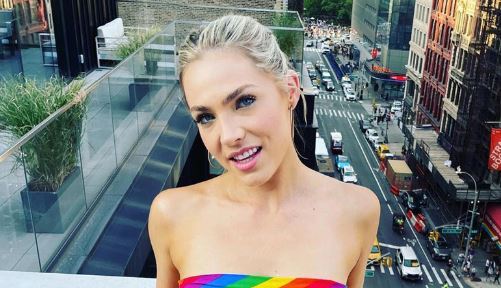 Elizabeth Corrigan—who appeared on Clayton Echard’s season of The Bachelor opened up about her sexuality on Instagram.

Before Pride Month comes to a close, Elizabeth Corrigan is opening up about her sexuality.

The Bachelor alum shared that she is queer while sharing a photo of herself wearing a rainbow top in an Instagram post. “It’s hard to know the right way to say these things, or the right time,” Elizabeth wrote on June 26. “Waking up this morning to my first Pride in NYC I was so excited. I sprung out of bed, went to get a coffee-bought a flag- and quickly began feeling anxious. Overwhelmingly so. Am I ready? No. Am I scared? Yes.”

In her post, the 33-year-old expressed her fear of coming out in the past but said, “I am, always have been, and always will be-bisexual.”

“Everytime I tell someone new this information I experience fear,” Elizabeth explained. “Fear that it will end a business transaction, fear that I will make someone uncomfortable, fear that I would be ostracized from my family.”

Despite her worry in discussing her sexuality, she said that what’s more important to her is to unapologetically be herself: “Authentic. Genuine. Raw.”

Elizabeth concluded her post by expressing her hope that her coming out might help even one person “feel less alone.”

“I’ve got you. I’m here-I’ll answer. You are NOT alone,” she said. “Hoping that one day the fear will turn to what it should be …PRIDE. Only love. All love. Today and each day to come. Moments matter.”

The real estate agent appeared on Clayton Echard‘s season of The Bachelor, which aired earlier this year, but was sent home on the third week due to drama with another contestant, Shanae Ankney.

At the time, tensions ran high after Shanae accused actress Elizabeth of bullying her, which she denied and explained that her neurodivergence makes it difficult to have multiple conversations simultaneously. Shanae then proceeded to tell the rest of the house Elizabeth had ADHD.

Clayton issued a public apology on Twitter for how he handled the situation after the episode aired.

“I’m sorry, Elizabeth, for what you’re going through,” he wrote on January 31. “I wish I could have seen what was happening when I wasn’t there. I obviously knew y’all weren’t in a good place, but at the time I thought it was, solely, petty drama.”

He also assured Elizabeth that he would have sent Shanae home “immediately” had he known she was making fun of Elizabeth’s neurodivergence.

The Bachelorette premieres on July 11 on ABC.