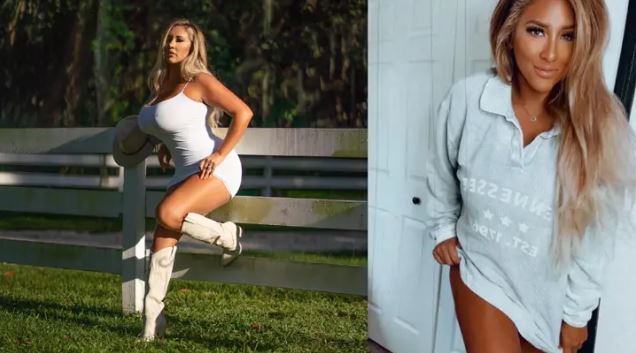 How much is Sara Blake’s net worth? OnlyFans adult content creator has made an impressive salary from her career.

OnlyFans can be a lucrative job for many people, and one star has been making headlines after her success.

Sara Blake revealed she has had to move house due to her success on the adults-only website, and she has been raking in the cash since signing up.

The OnlyFans star revealed she had to move house, but how much is her net worth?

How much is Sara Blake’s net worth?

Sara and her husband, Matt Cheek, have said they earn $30k a month on OnlyFans since joining in November 2020 and recently said they have earned more than $1 million this year alone and she has referred to herself as a millionaire.

They have since relocated with their four children to a remote farm to get away from nosey neighbors who discovered their career.

Sara said: “I was devastated. I’ve always felt very comfortable with my sexuality and if people want to pay to see that, why wouldn’t I let them? I want to inspire other women who love sex. I love it and enjoy it. I don’t view it as anything bad.” They now live on a six-acre farm and home-school their children.

Sara said they make content at night once the children are in bed, however, she also revealed that her career has moved beyond adult content.

She explained: “My career has evolved beyond OnlyFans and I have worked alongside ESPN radio and I get to interview footballers. You have to take something negative and make it positive.”

She has also appeared on Fox Sports and she now co-hosts The Coach JB Show with Sara Blake.

She was also a runner-up in the Mrs Kansas a beauty pageant.

Since finding fame on OnlyFans she has also landed the front cover of Playboy magazine.

In an interview she said: she said: “Landing a Playboy cover is something you dream of.

“And dominating as a Playboy bunny in the sports industry as a mum of four, an OnlyFans creator and a wife is literally something nobody has been able to do before.

“I keep saying this is only the beginning. I have maintained being a top creator on OnlyFans and have made a million dollars.”

“The perception that doing OnlyFans will prevent you from having a career is an outdated judgement made by the Karens and Steves of the world.”