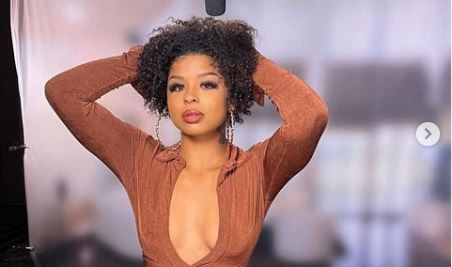 Chrisean Rock (real name Chrisean Malone Rock) is a YouTuber, social media celebrity, and reality tv star. Read on for more about her.

2020 was a year full of ups and downs for lots of people, and Chrisean Rock knows this all too well. At one of her low points during the year, she got into a physical altercation that resulted in her losing one of her front teeth.

At a high point, she became the first artist signed by Blueface. Now, she’s ready to make the most of her situation and start her career as a musical artist. While there is still some uncertainty about where this musical journey will take her, she’s already started to build a solid fan base full of people who are looking forward to seeing what she does next. Here are 10 things you didn’t know about Chrisean Rock.

Chrisean was born and raised in Baltimore and lived in several neighborhoods throughout the city. She comes from a large family and is the 11th of 12 children. She currently lives in the Los Angeles area, but Baltimore will always have an extra special place in her heart.

Most people know Chrisean through her affiliation with Blueface, but she’s working hard to establish herself as an individual. She started a YouTube channel in 2018 and has amassed more than 18,000 subscribers. Additionally, her channel has gotten over 800,000 total views.

3. Her Faith Is Important To Her

We weren’t able to find any information about Chrisean’s specific religious beliefs, but it appears that she is a Christian. She has hinted at the fact that her relationship with God plays an important role in her life. In her Instagram bio, she included the phrase “Jesus is King”.

From the outside looking in, it may be easy for some people to judge Chrisean but many of those people don’t know her story. She became homeless when she was around 9 years old and went without a consistent place to stay for several years – all while still attending school.

5. She Hasn’t Always Had The Best Relationships With Her Family

As mentioned before, Chrisean comes from a very large family and things between them weren’t always easy. Her father was in prison for much of her early life. In fact, she didn’t even meet him until she was 7 years old. Chrisean’s mother struggled with addiction making it difficult for her to be a consistent presence in Chrisean’s life. As a result, Chrisean wasn’t able to have a smooth and stress-free childhood. Despite that fact, Chrisean still has love for her parents. Fortunately, she was able to lean on some of her siblings when things were difficult.

6. She Competed In Ultimate Tag

Sometimes opportunities come when you least expect them, and that’s exactly what happened to Chrisean when she found out she had been cast for the competition game show Ultimate Tag which airs on Fox. Not only did she compete, but she took home the $10,000 prize.

Even though things weren’t easy for Chrisean when she was younger, the track was something she could always turn to. Her track coaches proved to be some of the most instrumental people in her life. Chrisean’s impressive track skills brought her all the way to Santa Monica College in California. According to her LinkedIn profile, she graduated from the school in 2020 with an associates degree in kinesiology and exercise science.

8. She Was Abused During Her Childhood

On top of all of the other hardships she had to deal with when she was younger, Chrisean was also the victim of abuse. During an interview with a local Fox News station in Baltimore, Chrisean shared that she was “choked out” and “beat on” during her childhood.

Looking and feeling her best are two things that are very important to Chrisean and fashion has given her a way to do that. She has a nice sense of style and she likes to put outfits together. No matter the occasion you can bet that she’s going to come in looking her best. She has even become a brand ambassador for clothing companies such as Ethika and Fashion Nova.

There’s no denying the fact that Chrisean has been through more than her fair share of hard times, but she isn’t letting that hold her back from having a bright future. She is focused on building the life she knows she deserves and she’s all about being positive. While some may not agree with some of the things she’s done, Chrisean doesn’t plan on letting other people’s opinions get in her way.

Chrisean Rock is a reality Tv star and is a cast of Baddies South season 2. Baddies is a reality TV series and franchise produced by Zeus Network. It is a continuation of the Oxygen series, Bad Girls Club, which aired from 2006 to 2017. It is also a follow-up to the two-part special of The Conversation: The Bad Girls Of Reality TV, which aired on December 6, 2020, and December 13, 2020.

The series focuses on nine self-proclaimed “baddies” living in a mansion. Unlike the original series, Baddies features girls from other reality TV series such as VH1’s Love & Hip Hop: New York and Zeus Network’s One Mo’ Chance.

Natalie Nunn is the only bad girl that returns as a main cast member for the second season, after Tanisha Thomas, Judi Jackson, Christina Salgado, Sarah Oliver, Janelle Shanks, Seven Craft, and Sidney Starr depart from the show. However, Christina, Sarah, and Sidney return as guest stars in the season. This season features three new bad girls from the Oxygen series, two girls from One Mo’ Chance, one girl from Blue Girls Club, and Instagram model, Anne Moore.

12. She Was In A Relationship With Blueface

Chrisean was an artist signed by Blueface and the two were also in a relationship. Recently, Blueface was seen hugging fans at a function. Later on, Rock was spotted at a nightclub with rapper, Fivio Foreign. From there, rumors that they have split started to spread like wildfire.

After rumors began circulating online that there was trouble in paradise with Blueface and Chrisean Rock — including him unfollowing/blocking her on the gram after she was posted up with NYC rapper Fivio Foreign — the LA rapper took to his IG Story to clear things up.

Blue continues to say, “Since y’all want to be so f**king nosey, I told Rock, ‘You can’t be coming in and out of my house anytime of day and anytime of night. I got an HOA, I got neighbors. I got real responsibilities that I’m not always there to take care of.”

13. She Has Been Arrested On Several Occaisions

Former Blueface Records signee Chrisean Rock (real name Chrisean Malone) on Friday (May 13) was reportedly arrested in New Orleans on a bench warrant out of Oklahoma.

According to the Orleans Parish Sheriff’s Office website, she’s currently in custody at the Orleans Justice Center. Just hours earlier, Malone posted a video of herself partying on Bourbon Street, but the night clearly didn’t end the way she likely thought it would.

Chrisean Malone was initially arrested in February for stealing Blueface’s Mercedes G-Wagon in an attempt to get home to Baltimore. She was also in possession of crack cocaine when she was pulled over.

Blueface called her shortly after her arrest, writing on his Instagram Stories, “Bitch stole my car and thought she was gone drive to Baltimore 25 hrs away. Dumbass. A thief is the worst thing you can be as a female. I’d have more respect for a prostitute…talm bout some ‘come bail me out.’”

13. Chrisean Rock’s Net Worth Is Expected To Skyrocket