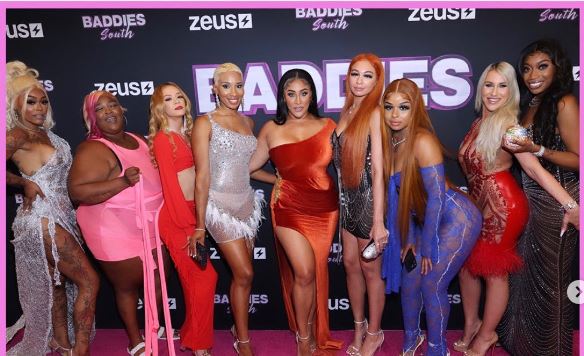 Who are the cast of Baddies South? Get to know the ladies in this new season of Zeus Networks‘ series, Baddies South.

Baddies is a reality TV series and franchise produced by Zeus Network. It is a continuation of the Oxygen series, Bad Girls Club, which aired from 2006 to 2017. It is also a follow-up to the two-part special of The Conversation: The Bad Girls Of Reality TV, which aired on December 6, 2020, and December 13, 2020.

The first season aired on Zeus Network on May 16, 2021. A second season was announced later that year, and a teaser for the season titled “Baddies South” was released on May 16, 2022.

The season continues the focus on self-proclaimed “baddies” together; however, the season is not set in Atlanta, Georgia, but presumably across various cities across the Southern United States. The trailer for the season was released on May 16, 2022, a year after the premiere of the first season. Unlike the Oxygen series and the first season of Baddies, this season features girls from other reality TV series such as Zeus Network’s One Mo’ Chance and Blue Girls Club, an OnlyFans reality series influenced by Bad Girls Club.

Natalie Nunn and Christina Salgado are the only bad girls that return for the second season, after Tanisha Thomas, Judi Jackson, Sarah Oliver, Janelle Shanks, Seven Craft, and Sidney Starr depart from the show. This season features three new bad girls from the Oxygen series, two girls from One Mo’ Chance, one girl from Blue Girls Club, and Instagram model, Anne Moore.

The Baddies are back, but this time with some new ladies looking to take the entire Dirty South by storm — in a big, decked-out tour bus. Along the way, the ladies will crash in luxurious homes, host and perform at the hottest clubs and parties, tap into the wild and dark side of southern culture and prove why they are the baddest girls around.

Meet The Cast of Baddies South

Natalie Nunn is a model, entrepreneur, producer, and TV personality. She is the Executive Producer of Bad Boys: Los Angeles and the Baddies Reality TV franchise. Natalie made her reality tv debut on Bad Girls Club Season 4, according to Bad Girls Club Fandom. Natalie was on Baddies ATL on Zeus with Bad Girls Club queen, Tanisha Thomas, and will be on Baddies South. While filming this series, Natalie was 37 years old. Follow her on Instagram.

Persuasian is a vlogger, dancer, model, influencer, U.S. Navy veteran, and TV Personality. While in bootcamp, Persuasian worked double duty entertaining the troops by night at the local strip club per Fandom. Persuasian is originally from Dallas, TX, and an original Bad Girl on Bad Girls Club Season 16.  While filming this season of this series, Persuasian was 32 years old. You can follow her on Instagram.

Bri is a reality tv star, model, and host.  She is your “your favorite bitches favorite bitch.” Bri, aka The High-Rolling Hustle, is originally from Las Vegas, Nevada, and was a replacement Bad Girl on Bad Girls Club Season 17. She also fought in Bad Girls Boxing. While filming, Briana “Bri” was 28 years old. You can follow her on Instagram, OnlyFans, and Twitter.

Jela is a reality tv personality, model, and fashion designer. She’s an original Bad Girl who was on season 14 of The Bad Girls Club. Jela created a fashion clothing line, Normal Culture, in 2016. Normal Culture’s goal is to help create new norms through visual and artistic self-expression. Jela, aka The Houston Hustler, is also a clairvoyant, healer, and psychic who grew up in Houston, TX. While filming this new series, Jela was 32 years old. You can follow her on Instagram.

Sim is a dancer, model, entertainer, and TV personality. She was on Season 2 of One More Chance on Zeus TV. One More Chance is a dating show competition for Chance from the first season of I Love New York. You can follow her on Instagram.

Anne is a self-proclaimed “Professional Clout Chaser,” model, influencer, and music artist. She has a new song coming out called Ms. Backshot baby. It seems like Anne uses her sex appeal as a punchline for Instagram likes and humor but I’m here for it! You can follow her on Instagram.

Gia is a host, influencer, host, and TV personality. She was on Seasons 1 and 2 of Zeus’ One Mo Chance dating show. You can check out her Instagram and her interview with Diamond Onasis, where she talks about her controversies on One Mo Chance. Follow her on Instagram.

Scotty aka “Scotty the Body” is a fitness trainer, model, brand ambassador, host, influencer, and TV Personality. She founded her own company, Snatched LLC, where she helps people with workout challenges and more. Follow her on Instagram, Twitter, and OnlyFans.

Chrisean first gained notoriety on Blueface’s Blue Girls Club project. She was known as the “First Lady of Blueface LLC” but then their collaboration ended a year later. However, they still are very much part of each other’s brands. Chrisean has played football influencer league with Blueface and makes appearances on his social media. She also went viral for coming to blow’s with Blueface’s Sister and Mother.

Chrisean is from Maryland, Baltimore. She is one of 12 siblings with estranged parents. Her father was in prison for much of her childhood, and her mother struggled to keep a home while battling drug addiction.” When she was nine years old, Chrisean became homeless but she made it to college and pursued athletics at Santa Monica College in California. Information courtesy of The Focus News. While filming this series, she was 22 years old. Follow her on Instagram.

Sidney Starr is an original in the first season of Baddies ATL but a guest cast in Baddies South. Although she wasn’t an original bad girl in the original Oxygen series, Bad Girls Club, she was allegedly a replacement bad girl for Season 9: Mexico.

She is also the first transgender bad girl to appear in the series. Sidney Starr is originally from Chicago, Illinois, and is currently 31 years old.

Sidney appeared in many other reality TV shows, including Season 9 of Love and Hip-Hop: New York.