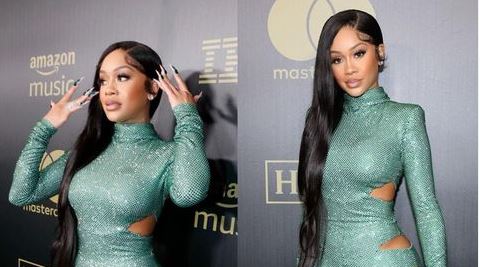 Who is Saweetie dating now? Does Saweetie have a boyfriend? Read more about the relationship life of the rapper.

Saweetie and Quavo announced their shock split on Friday (19 Mar) after three years of dating. The Icy Girl and her former Glacier Boy first got together in 2018 and appeared to be going strong until their surprise break-up.

Since then, fans have been wondering about the status of her relationship and if the Tap In singer has found a new man.

So, who is the Bay Area rapper dating and who did she date before and after the Migos star? Saweetie, whose real name is Diamonté Quiava Valentin Harper, has been romantically linked to a number of famous faces in the past.

Diamonté Quiava Valentin Harper was born on July 2, 1993, in Santa Clara, California, to Trinidad Valentin, who is of Filipina and Chinese heritage, and Johnny Harper, who is African-American.

After the release of her debut single “Icy Grl” in 2018, she was signed to her then-manager Max Gousse’s record label Artistry Worldwide, a subsidiary of Warner Records.

Saweetie released her debut extended play, High Maintenance, in 2018. Her second EP, Icy, was released in March 2019 and spawned the top 40 single “My Type“.

Her debut album, Pretty Bitch Music, is scheduled to be released in 2022 and was preceded by the singles “Tap In” and “Best Friend” (featuring Doja Cat), both of which reached the top 20 on the Billboard Hot 100.

In 2021, she received two nominations for the 64th Annual Grammy Awards including one for Best New Artist.

What did Saweetie go to college for?

After high school, she attended San Diego State University, where she studied communications and business before transferring to the University of Southern California, where she completed her degree and received a Bachelor of Arts (BA) in communications. After graduating, she began to focus on her rap career.

During her time at the university, she juggled multiple jobs. She made T-shirts for her brand “Money Makin’ Mamis”, and worked jobs at the Marshall school and at a sports bar. She also put several hours into research projects.

Saweetie visited her alma mater in February 2022 to talk about entrepreneurship.

Who is Saweetie dating?

Rapper Saweetie at the moment appears to be single. She is neither married nor has a boyfriend. She hasn’t been linked to being in a relationship with anyone yet.

If you could remember, Saweetie took to Twitter to announce that she is officially single when she and Quavo broke up. “I’m single. I’ve endured too much betrayal and hurt behind the scenes for a false narrative to be circulating that degrades my character,” she wrote. “Presents don’t band-aid scars and the love isn’t real when the intimacy is given to other women.

Who has Saweetie dated in the past?

Saweetie and Quavo dated for three years until their split in March 2021. Saweetie appeared to insinuate that Quavo had been unfaithful in a series of tweets. In December 2020, Saweetie gifted Quavo a rare Richard Millie watch worth $300,000 for Christmas. In return, Quavo gave his girl a brand new white Bentley. However, in March 2021, the couple officially ended their relationship after the two were involved in a physical dispute in an elevator, which occurred sometime in 2020.

After her break up from Quavo, the Icy Girl singer was reportedly linked to NBA All-Star James Harden – after the baller sent her $100,000 and a date request via CashApp.

On November 25, 2021, rumors began swirling on the internet that Saweetie was dating rapper Lil Baby. Saweetie sparked a social media frenzy after a photo leaked online showing her sitting on the lap of an unknown male. Fans began claiming that the man in question was Lil Baby after it was rumored that he spent $100,000 on her during a shopping spree. However, Lil Baby took to Twitter to debunk the dating speculation, writing: “Baby not dating NO ONE!! I’m single!”

In November 2021, her dating life was back in the spotlight after Snowfall actor Damson Idris shared a video of Saweetie playing the piano on his Instagram Story. “Saweetie My Teacher,” Damson wrote. Following the video, fans were convinced that the two were dating but neither of them has confirmed a relationship.

Saweetie and fellow rapper Jack Harlow sparked romance rumours after sharing a flirty exchange at the BET Awards 2021. While being interviewed on the red carpet, Saweetie was approached by Harlow who shook her hand and introduced himself. Was Jack shooting his shot at the Bay Area beauty?

Roddy Ricch is rumored to have hooked up with Saweetie in Oct 2021.

Jackboy and Saweetie had an encounter in Jul 2021.

Saweetie and Michael B. Jordan dated from November 2017 to January 2018.

Saweetie reportedly began dating Justin Combs – the son of music mogul Diddy – in the summer of 2016, while Saweetie was still a student at the University of Southern California. It’s unclear how long the pair dated, and neither party has ever confirmed the reason behind their breakup. However, it has been reported that Justin allegedly left the rapper for another girl named Aaleeyah Petty.

Saweetie dated American actor Keith Powers, best known for his roles as Ronnie Devoe in ‘The New Edition Story’ and Tyree in ‘Straight Outta Compton’, for four years before their breakup in 2014. Powers went on to date singer and actress Ryan Destiny. The pair have been dating since 2017.