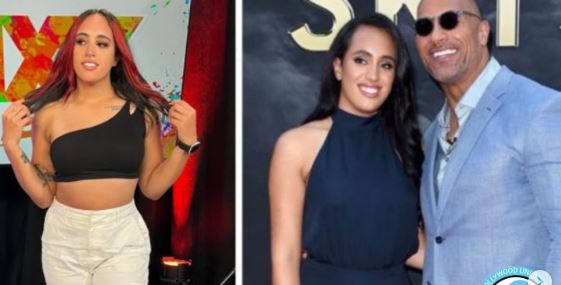 Simone Johnson has big shoes to fill. Back in 2020, Dwayne Johnson’s daughter signed with WWE, following in her father’s footsteps. The Rock was a proud dad, saying, “It means the world to me to know that my family has such a personal connection to wrestling is really special to me and I feel grateful to have the opportunity, not only to wrestle but to carry on that legacy.”

Two years later, Simone finally stepped into the ring last night in her WWE debut. By doing so, she immediately made WWE history, becoming the first fourth-generation wrestler to compete in the organization.

Simone, whose wrestling name is Ava Raine, has now entered the profession of not just her dad, but her grandfather Rocky Johnson and her great-grandfather Peter Maivia, who all worked as professional wrestlers in WWE. Of course, the Rock used his wrestling career to pivot into other lucrative endeavors, becoming one of the biggest movie stars in the world.

Apparently, Simone’s WWE debut went well. Fans who attended the Orlando, Florida event said on social media that Simone put on a great show, trash-talking her opponents and labeling herself “the Final Girl.” Simone paired her debut with a new look, revealing a black and red hairstyle that some fans think could be her wrestling persona’s signature look. Although Simone has yet to have a televised WWE appearance, it seems that the next step is right around the corner as she has changed her social media profiles to reflect her stage name.