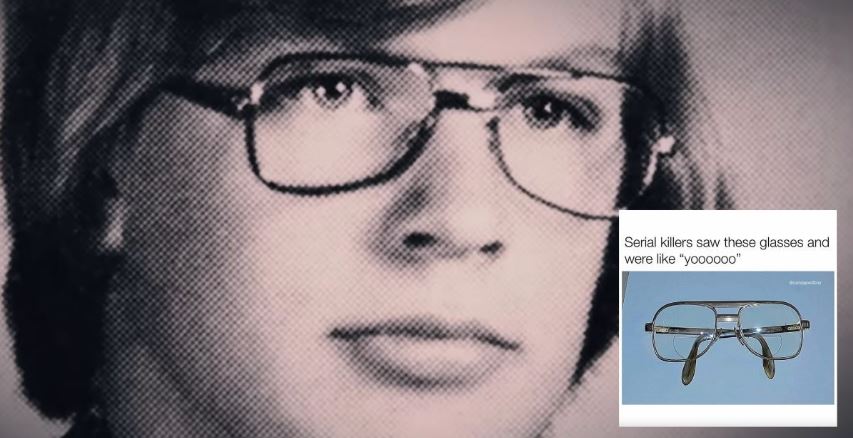 Jeffrey Dahmer isn’t the only serial killer Who wore Aviator Glasses – here’s a list of some murderers who wore the sunglasses.

These days, everyone from Joe Biden to Zac Efron owns a pair of aviator sunglasses. The thin wire-framed eyeglasses, complemented with dark lenses, have become a trendy sunny day staple because as Twitter user @krysilove put it in a tweet, “Aviator glasses really look good on everyone. That’s a superior shape.”

When it comes to aviator frames paired with clear lenses, the popularity goes down. It’s as if when the glasses have prescription lenses in them for everyday use, they’re just not as cool. And while Justin Bieber and Kendall Jenner have been spotted donning them, it’s clear they were only worn to make a fashion statement.

There’s a lot of talk about Jeffrey Dahmer’s aviator glasses.

For years, Jeffrey Dahmer’s aviator glasses have been a hot subject on Twitter. And now that Netflix’s latest biopic series Monster: The Jeffrey Dahmer Story has been released, the talk is starting up again.

People are obsessed with Dahmer’s aviator glasses, despite the fact that he is definitely not the first person to wear them. Nonetheless, aviators have become synonymous with Jeffrey Dahmer’s glasses across social media.

But while Dahmer is most commonly associated with specs, he’s just one of a handful of serial killers who wore aviators or aviator-adjacent glasses. Historically, there has been somewhat of a correlation linking these glasses to those who ruthlessly murder. In fact, people have even teased this phenomenon on social media.

In addition to Dahmer, Dennis Rader (the BTK Strangler), who killed 10 people in Kansas from 1974 to 1991, also had a pair of similar clear-lens glasses.

California-based serial killer Ed Kemper also wore similar eyewear, as he savagely took the lives of six college students, his own mother, and her best friend in the early ’70s.

Furthermore, although female serial killer Dorothea Puente didn’t have aviators per se, she did don a similar pair of oversized glasses, but with thicker frames.

Meanwhile, the Zodiac Killer, who is believed to be Gary Francis Poste, was also depicted having large lens glasses in the police sketch that was drawn of him.

Now — just to set the record straight — in no way am I implying that people who wear aviator glasses are serial killers. But the sameness of these killers’ eyewear is definitely interesting.

So, why would they all choose similar glasses?

While it could just be an eerie coincidence, research shows that people who wear glasses are generally seen as more attractive and trustworthy — which, come to think of it, might help serial killers lure their victims.

Furthermore, former lawyer Harvey Slovis told Ethics Alarm that glasses are part of what has been dubbed the “nerd defense” in court. And more often than not, clients who wore glasses and dressed well were acquitted, despite the evidence against them.

He explains, “Glasses soften [suspects] appearance so that they don’t look capable of committing a violent crime.” Perhaps that was what Dahmer was thinking too.