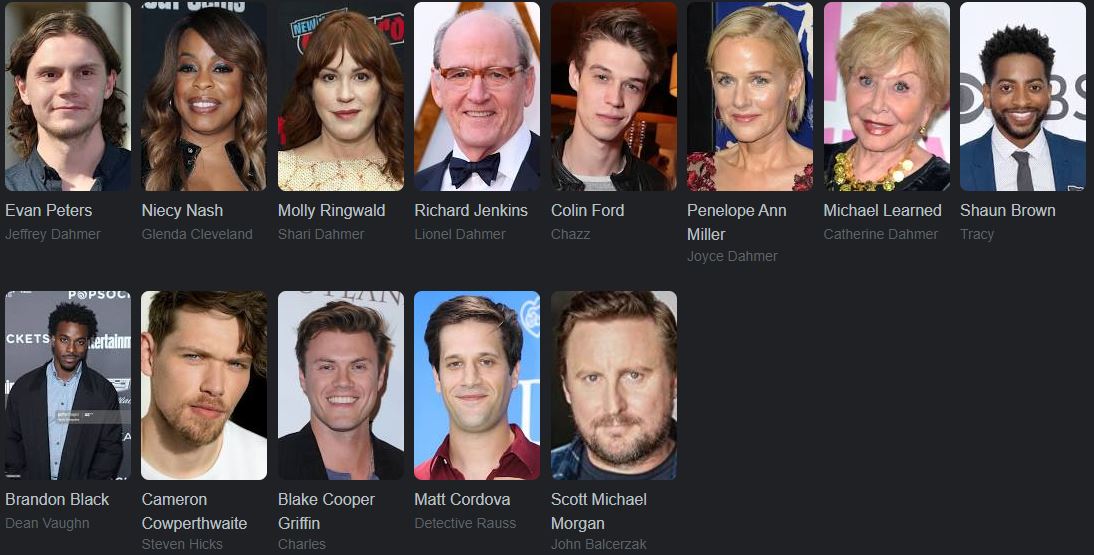 Who are all the actors in Netflix’s Monster: The Jeffrey Dahmer Story and how old are they now? Also, check out their Instagram pages.

A new Ryan Murphy series is on the horizon as part of his overall deal with Netflix. Monster: The Jeffrey Dahmer Story is about the infamous serial killer. Frequent Murphy collaborator and American Horror Story star Evan Peters plays the titular role. Based on the early images and trailer, he certainly looks the part.

According to the show’s description, Monster was different from previous Dahmer-centric movies and television series as it aims to focus on Dahmer’s victims, telling the story from their perspective rather than the murderer’s.

Monster is just one of several Murphy projects coming this fall, with Mr. Harrigan’s Phone and The Watcher also premiering in the coming months.

Who is Jeffrey Dahmer? Jeffrey Dahmer is one of America’s most notorious serial killers, who between the years 1978 and 1991 gruesomely murdered 17 men and boys. He was captured in 1991 and convicted in 1992, before being killed himself while in prison in 1994.

Who is Evan Peters? Peters is known for his role as Quicksilver in the X-Men series, a role he also played (sort of) in the MCU series WandaVision. He’s also a favorite actor of DAHMER’s creator Ryan Murphy, having appeared in American Horror Story and Pose. Last year, he starred alongside Kate Winslet in Mare of Easttown.

Who is Lionel Dahmer? Lionel is Jeffrey’s father and a research chemist.

Who is Richard Jenkins? Jenkins is a prolific film actor who has starred in The Shape of Water, Step Brothers, Kong: Skull Island, Spotlight, The Cabin in the Woods, and many more movies. On TV, he previously starred in Berlin Station.

Who is Shari Dahmer? Shari is Lionel’s second wife and Jeffrey’s stepmother.

Who is Molly Ringwald? Ringwald is best known for her starring role in ’80s movies such as Sixteen Candles, Pretty in Pink, and The Breakfast Club. She has also recently had major roles in series including Riverdale and Feud: Bette and Joan.

Who is Catherine Dahmer? Catherine was Jeffrey’s grandmother who he lived with since 1981. He often lured his victims to her house.

Who is Michael Learned? Learned is best known for her role as Olivia in the 1970s series The Waltons, while she has more recently had roles in series including Scrubs, General Hospital, and The Young and the Restless.

Who is Glenda Cleveland? Glenda was Jeffrey’s neighbor who reportedly told the police she was suspicious of him but they failed to act.

Who is Niecy Nash? Nash is known for her role as Dr. Jamie Ryan in Netflix’s Never Have I Ever, while she has also appeared in series such as Scream Queens, Claws, When They See Us, and Mrs. America.

Who is Joyce Dahmer? The mother of Jeffrey Dahmer struggled with mental health issues prior to her divorce from Lionel Dahmer.

Where have I seen Penelope Ann Miller before? A broadway star, Miller has appeared in Hollywood films such as Adventures in Babysitting, Biloxi Blues, Big Top Pee-wee, The Freshman, Awakenings, Kindergarten Cop, Other People’s Money, Year of the Comet, and Carlito’s Way.

What else have I seen Shaun J. Brown before? Brown is best known for his role as Mason in the television series The Great Indoors but has also appeared in episodes of True Blood, Glee, Grimm, Grace & Frankie, Future Man, and Run.

Who is Ronald Flowers? In the drama, Flowers is a man who narrowly escapes becoming a victim of Jeffrey Dahmer.

Where else have I seen Dyllón Burnside before? Burnside is best known for his role as Ricky Evangelista in Ryan Murphy’s FX drama Pose. The actor has also appeared in episodes of High Maintenance and American Horror Stories.

Who is Christopher Scarver? Scarver is a convicted murderer who was in prison with Jeffrey Dahmer and ultimately murdered the serial killer.

Where else have I seen Furly Mac before? Mac has also starred in the series Star, Chicago P.D., South Side, and the film The United States vs. Billie Holiday.

Here is the complete cast list for Monster: The Jeffrey Dahmer Story