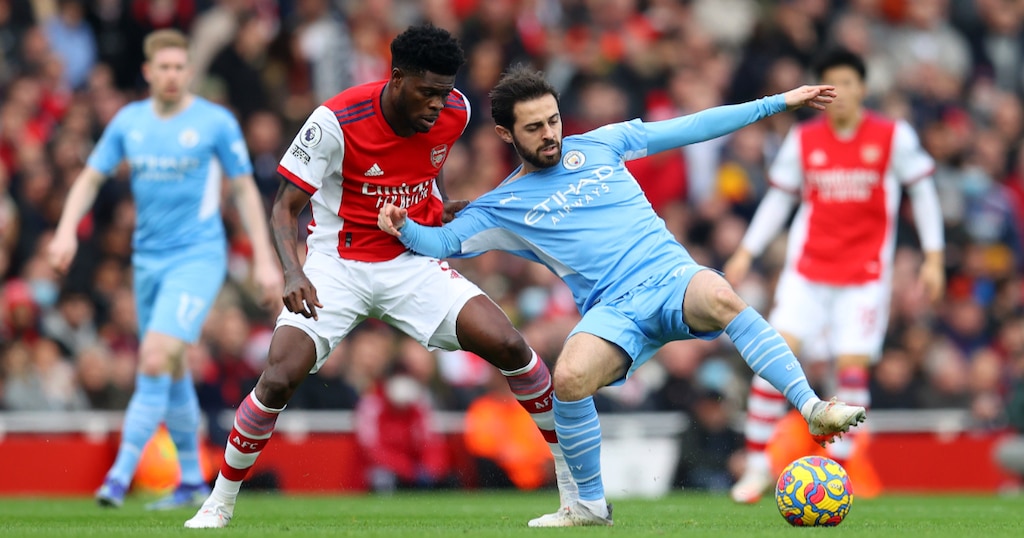 The game between Arsenal and Manchester City was a decisive one and this game could have changed the EPL standings. On the day, Arsenal was far the better team than Man City until Arsenal saw a red card in the second half of the game.

In the game, Arsenal mentality in yesterday’s game was brilliant from start to finish until that silly mistake from Granit Xhaka that led to a penalty. The Gunners are acting differently now but one thing they are missing is to lock horns with the big boys ( the big teams), they are ascertaining that against the bottom teams but now it’s time they step up to the big boys in the game.

I think Arsenal should have won the game and this is why;

Without a doubt, the North London side was better than Pep Guardiola side. Arsenal meant business on the day but in the end, City fought to grab all three (3) points at the Emirates Stadium. The dominance of the Gunners in the first half should have won them the game, Arsenal created most of the chances but they couldn’t put them away in the end.

The moment Bukayo Saka scored the first goal of the game, you could clearly see the Cityzens weren’t able to cope with the vehemence Arsenal were trying to bring to them. A couple of chances were created, which the North London side should have put to bed to seal the game.

2. The potential penalty check for the Gunners on Martin Odegaard

All the talking points will be on whether the Video Assistant Referee (VAR) got it right for turning down the Arsenal penalty appeal, to me they got it wrong completely this time. The point is, was there a clear contact when Odegaard collided with Ederson, for me I would say Arsenal deserved that penalty because, from the angels on which the replay of the incident was shown, Ederson made clear contact with Odegaard, there was no dive or what so ever from Odegaard.

These are the decisions that cost teams when they’re having a good game and that’s what Arsenal encountered today, this sort of situation shouldn’t be happening in a decisive game like this.

3. Mikel Arteta men showed character until the last minutes of the game

Arsenal from start to finish showed character until the last minutes of the game. It’s clear Arteta has a pattern his team is trying to get across and it’s granting them results. Not having a good start to the season and ending up in the top four (4) as things stand, means the Gunners are really working to execute their plan. Yes!, people would say Manchester City didn’t have enough rest but these excuses can never be accepted because so far as you have trained and is ready to play, this game shouldn’t be an issue of tiredness.

The Gunners looked very sharp until the red card incident occurred which changed the game completely, even in the difficult moment of the game they didn’t let their guts down until that last-minute stoppage-time goal from Rodri. I think this should be a positive start to their project and build on the negative aspect of their game.

4. Gabriel Martinelli missing a huge opportunity to seal the game in the second half

The Brazilian forward had an open play opportunity that should have put the game to bed but the forward hit the post with his effort. These chances are mostly missed, so not putting the ball in the back of the net, was not a surprise to me but I know the Arsenal fans would be gutted with Martinelli for not putting that chance away.

This same situation happened in the game against Manchester United and Burnley where Cristiano Ronaldo was one on one with the goalkeeper but sent his effort over the bar, so Martinelli is just one of the victims of these cases.

Just after Riyad Mahrez put the penalty in the back of the net, Arsenal nearly got a goal after Aymeric Laporte’s back header pass to his goalkeeper Ederson which Nathan Aké did one of the brilliant clearance of the game. It was in this same circumstance that Martinelli got the chance to score with the goalkeeper out of position. I would say Aké save the game for Manchester City and everybody knows that from his clearance, such defenders are mostly not credited for their effort but from where I stand, Aké won the game for Manchester City. If not for the Dutch international, Arsenal would have been ahead in a split of a minute after drawing level.

This performance from Arsenal should tell them, they are on the right track and with time they would march the likes of Manchester City, Liverpool, Chelsea, and Manchester United boot for boot. Yes, they’re doing that against the bottom teams but now they have to step it up against the big boys.