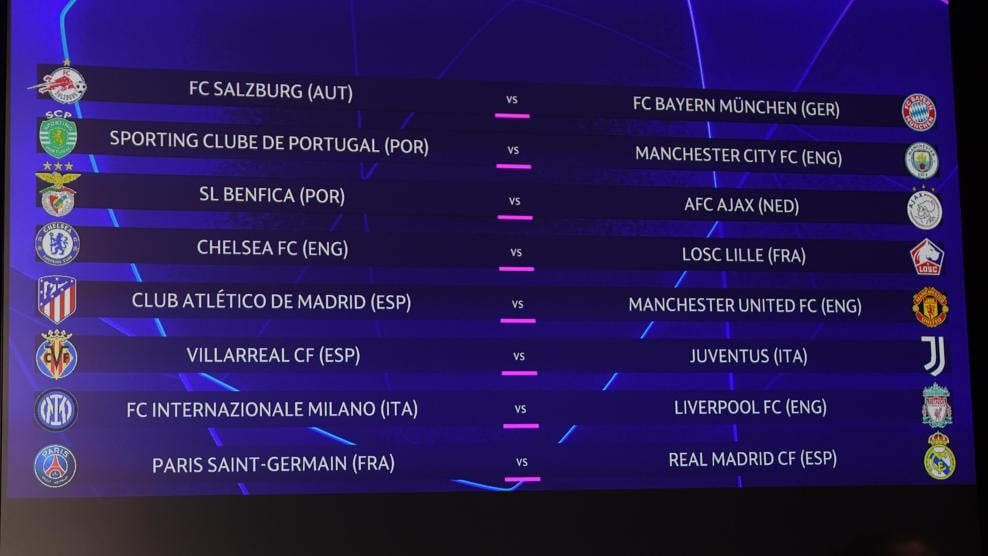 After an intriguing group stage fixtures which saw teams like Fc Barcelona drop to the Europa League after a horrible start to their champions league campaign. Teams ( Villarreal, Real Madrid, Bayern Munich, Atletico Madrid, Liverpool, Manchester City, Manchester United, Red Bull Salzburg, Lille, Benfica, Sporting CP, Chelsea, Ajax, PSG, Inter Millan, and Juventus) that qualified to the round of 16 will face the next task ahead of them.

The champions league (round of 16) draw took place in Nyon, Switzerland around 3:00 pm. Now it comes down to the teams that will go toe to toe with their counterparts to progress to the next round of the competition. This is how the tie looks like; PSG vs Real Madrid, RB Salzburg vs Bayern Munich, Inter vs Liverpool, Chelsea vs Lille, Atletico vs Manchester United, Sporting CP vs Manchester City, Benfica vs Ajax, and Villarreal vs Juventus.

PSG on the other hand has W3, D2, L6. The stats show Real Madrid has been dominant over the Ligue 1 side. This should be a mesmerizing game to watch with the form Carlo Ancelotti’s side is in, yes it’s a long way but Real Madrid form is not dipping anytime soon. Mauricio Pochettino’s side has their issues but I think they will go all-in for this particular game.

Sporting CP is going to face a side that is desperate to write their name in the history book of the Champions League but this type of game can be very tricky for a big club like Manchester City because what you don’t expect from a team like Sporting CP to deliver, that’s exactly the performance they will put up against the Sky Blues.

This game should be an exhilarating one to watch. There is no favorite in this type of game although Sporting CP is going into the game as underdogs and the “Citizens” as the number choice, there could be a surprise.

Bundesliga side Fc Bayern Munich is in excellent form and is difficult to bypass at the moment. Austria league leaders RB Salzburg’s task has become more intricate than ever and would have to be at their best version to compete with a team like Bayern Munich. The Austria side Champion League campaign hasn’t been that convincing after they struggled in their group. Fc Bayern Munich should be able to bypass RB Salzburg but they won’t get it that easy.

Two strong teams cross paths in the knockout stage of the champions league. Benfica did very well in qualifying for the next phase of the competition, Ajax winning six out of six games in their group, shows Ten Hag men mean business. The Eredivise side is ready to frustrate any team that comes their way, Benfica would have to be more than ready to face an Ajax side that is desperate for greatness.

Nerazzurri and the Reds lock horns